I want to make a picture frame while avoiding the routing involved to inset the picture, glass, and supporting backer into the back of the frame. The wood trim and molding at big box stores looks a lot like picture frames. Is there a suitable type of trim/molding for making picture frames easily?

You can of course make picture frames from just plain flat boards, even 2x material, so mouldings are certainly a workable starting point for a more elaborate surface profile than flat wood.

I want to make a picture frame while avoiding the routing involved to inset the picture, glass, and supporting backer into the back of the frame.

This is actually the core of the question and it's actually easily resolved since you don't need to do any routing. You can use a build-up method instead.

Here's a cross section of some standard frame profiles with a routed groove along the back:

Shouldn't be hard too see that the top portion, the wide part, could be a bit of standard moulding from the DIY or big-box. The rabbet/rebate can simply be formed by glueing on a second, narrower, piece of wood.

So here's the built-up equivalent:

As you can see this is really very simple and easy so I don't know why it isn't more commonly done by early or beginner woodworkers who don't have a router or other means to easily form the groove, but I suspect it's just that people don't think of it themselves. I know I hadn't, I read of this method in a book and it was an "Ah-hah!" moment because after you see it it does seem head-smackingly obvious.

I'm in the UK / Germany, so it might be different where you are. However all the big DIY stores I have seen, have mouldings designed for picture frames in their stock.

As a single example: https://www.hornbach.de/shop/Bilderrahmenleiste-kiefer-roh-22x46x2000-mm/5491105/artikel.html (I'm assuming you can't read the text, but the pictures should work).

And in case the link rots, here is the cross section (note, the dimension are in mm :-) ) 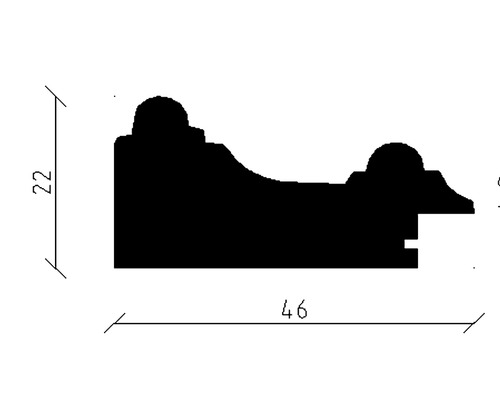 Not the answer you're looking for? Browse other questions tagged framing or ask your own question.

7
How to build a picture frame?