What is the maximum width for a full cross grain glue up? 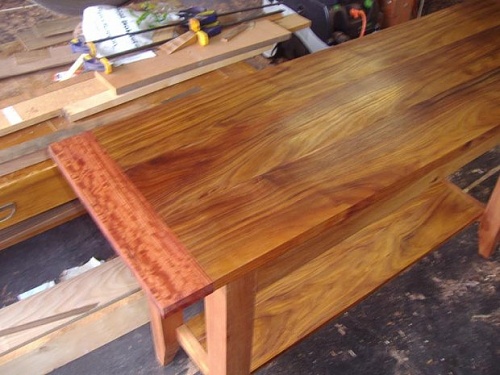 I have visited sites that provide the decimal widths of expansion for various species, but do not have a feel for what levels of movement can be absorbed by a glued joint, before it begins to fail. I also understand that breadboards provide protection against cupping, but that can be addressed in a variety of ways.

Although there are some broad generalisations that can usefully be made (e.g. a post I read recently suggested that you should make a breadboard floating "for anything larger than a side table") overall I don't think this should be approached in an in general kind of way since it's all about the specifics, not just species but the cut of the board or boards is absolutely critical because radial movement is about half that of tangential movement, and can be even lower in some cases.

Say you're working with a species known for high movement (e.g. red oak) for example, if you choose quarter-sawn boards for the field of a table then expansion will be low, even compared to another species known for its stability. So, quarter-sawn red oak expands and contracts much less than flat-sawn redwood, because it's radial expansion in the former and tangential expansion in the latter.

This all assumes well-dried stock of course, if the stuff is not at equilibrium with the surroundings when building the piece movement should be expected to be higher than predicted.

Where you do decide to go with a fully glued bond this is one case where a glue noted for creep (e.g. white versions of PVA) is a superior choice to one that is very much more inflexible (e.g. hot hide glue). Where the PVA will allow a little give in the joint the hide glue might fail suddenly and startlingly with "a report like a toy pistol" as Charles Wheeler put it.

I also understand that breadboards provide protection against cupping, but that can be addressed in a variety of ways.

Yes. My feeling is that breadboard ends should only be used when you want the look (or in the rare case when you need to extend length of available material) and not as the go-to solution to helping a tabletop remain flat.

Not all glue-ups need any help to remain flat anyway, particularly if well coated with a film finish, and of course rift-sawn and quarter-sawn wood will tend to bow less than flat-sawn. But where some help is deemed needed battens on the underside I think are preferable for a number of reasons. Chief amongst them is that when the top is at full expansion or full contraction you can't see it as a noticeable step at the edge of the table, something I very bothersome myself.

Perhaps more important to a lot of woodworkers battens are far easier to install on a table. No need for the elaborate and sometimes time-consuming creation of a long tenon and deep mortise, you just make suitable holes in the batten to allow for movement, screw them to the underside of the table and you're done. So better aesthetics (IMO) and simplicity itself to fit. Win win in my book.

I think all the above links use the data from the US Forest Service, instead of just summaries the whole table might be of use:

19
which direction does wood expand?
6
What wood is not good to use in a cutting board?
6
When working with maple, do I need to seal the wood before assembling the furniture?
4
How do i create a really long box joint?
6
Why keep gaps in siding of outdoor furniture project?
7
Is this cedar planter box design asking for problems w/ wood movement?
5
Exterior glue for tapered plugs
1
Is there any way to join/seal large exterior mitre joints such as on a bay window sill so that they don't open up?
1
Dealing with wood movement when attaching a wide panel to a curved leg

11
"Joint" or "Join": What is the name for the place where two pieces of wood are fastened together?
14
Is glue the best permanent join?
27
What is special about wood glue?
9
When making a box joint, how do I calculate the width of the board so that the teeth appear even?
6
What is the strongest join for splayed legs?
13
What are the different grain directions, and how do they affect joint strength?
7
What are the minimum, maximum, and optimal depths for dadoes, grooves, and rabbets?
2
What is the weight limit for shaker pegs?
0
What are the standard dimensions for biscuit joints?
2
advice for glue-and-screw butt joint