I tried using pallet wood for a small project, but it was really hard to take apart. Spiral looking nails everywhere. I ended up tearing more wood up than what I could use.

How does one disassemble a pallet for up-cycle pallet wood projects?

Pulling the nails
Initially most people who do this will start with a claw hammer. While that can obviously work it has some definite downsides. Other than the aching backs most people will experience some wooden-handled hammers simply can't take the strain of pulling ring-shank and spiral-shank nails, that have often rusted into the wood, again and again and again. I found this out the hard way.

All-steel hammers and those with fibreglass handles should be immune to this problem, but the effort involved in pulling nails with a hammer is still more than you need to expend. It's better to use leverage to your advantage and use one of these instead: 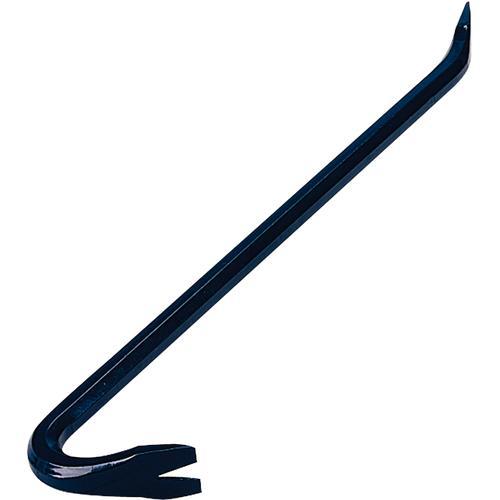 These make the job a lot easier.

You will also run into the problem of nails with weak heads, or heads that have become weak due to rusting, which means they bend or break off when you try to pull them using a hammer's claws. A well-made claw hammer or wrecking bar doesn't require the head to be in place, but if you don't have one with sharp enough internal edges in the 'V' you usually have to resort to pulling some or all of the nails from some pallets using a nail puller, although you can do a surprisingly decent job with a pair of pliers.

Using all of the above tools it is a good idea to protect the surface of the wood from being bruised by with a small scrap of wood. With pliers especially this provides some much-needed levering advantage too.

Related previous thread: What is the best way to remove nails from pallets?

Breaking pallets down
Beyond pulling nails to get boards off there are dedicated tools now made for taking pallets apart. In addition to the ones you can buy there are a few projects posted online with instructions for making your own (note that this usually requires welding). Most have a soft of family resemblance to the commercial varieties and end up looking something like this: 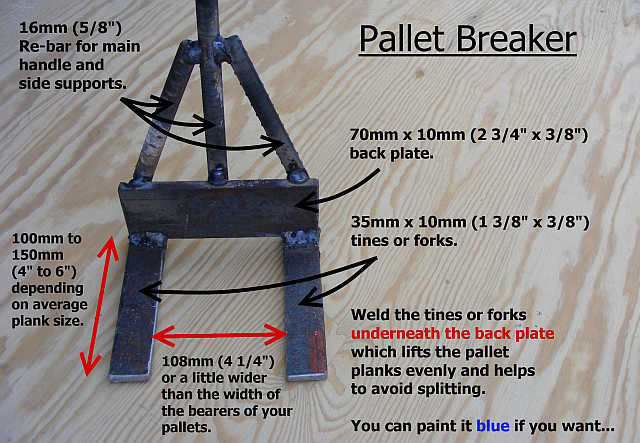 These greatly speed up the breakdown of a pallet (see YouTube videos for just how much) but you are of course still left with the nails to remove after. Or perhaps not.....

Leaving the nails in place
Many people who do this a lot eventually stop their attempts to pull nails because of the time and effort involved. But more than this there is also the great chance of damaging the wood as you've experienced. In addition the wood at the site of the nails can be cracked already, something I'm sure everyone who has taken apart a number of pallets will have experienced.

Where this is done to break the pallet down the two main tools used seem to be an angle grinder with a suitable wheel or a reciprocating saw. The boards are levered up slightly from the blocks they're nailed to, just enough for clearance of the wheel or saw blade, and then the nails are cut through at the back. With practice this can go very quickly and efficiently.

Leaving the nails in the wood might seem actively risky given that further processes are going to run into the embedded metal, which can damage tools and even pose a significant personal safety risk in the case of planers and other power tools. But if you really want to upcycle the wood from a pallet you would ideally lose any nail holes, so the wood in that area is always going to be discarded anyway. Obviously this does greatly limit the size of the pieces you get but it's worth it. When you do this you end up with material that nobody can tell used to form part of a pallet, which I think is the ultimate goal myself.

And there is some very nice wood indeed being used to make some pallets. Not that softwoods are inherently inferior but I've gotten Honduran mahogany and others have harvested purpleheart, padauk, teak or something very similar, oaks of various kinds and numerous other hardwoods. Quality wood like this shouldn't be marred by nail holes and any associated iron staining if it's to look its best.

Cleaning off the surface
Not directly tied to disassembly but the rough-sawn surface of much pallet wood can of course be very dirty. It can harbour a significant amount of grit, which can itself pose quite a risk to your tools. It is worth the time to wash and scrub down the wood, or at least give if a thorough going over with a stiff wire brush to get the worst of this off before you begin any finer processes, especially surface planing.

Not the answer you're looking for? Browse other questions tagged pallet or ask your own question.

11
What is the best way to remove nails from pallets?

7
Can some woods just never have a clean finish after sanding?
13
How to straighten a warped board
9
Recycling “pre-loved” lumber — techniques?
12
What do I need to know when looking at pallets for wood?
12
What is a good method for laminating pallet wood/reclaimed lumber?
16
Planing thin stock without the aid of bench dogs
0
How do I ensure that the bottom of my shelf project is level?