What drove the design for the traditional tang? 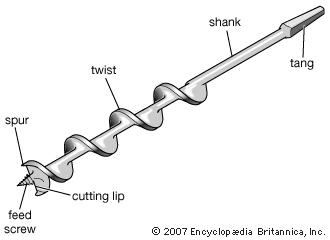 Many traditional bits and tools used the tang style end. I am trying to figure out why that was the standard at the time. Was it power tools that changed the game and allowed the cylindrical and hex tang styles? I would have assumed those much easier to manufacture, given their uniformity, then that of the tapered tang you see above.

One obvious thing solved by the tang is that you don't risk the bit coming out of the tool when you are pulling out of the work. Was that the problem that couldn't be fixed until the advent of modern power tools?

I could understand that just using a cylindrical tang, like you see on modern drill bits, would be difficult. Possibly due to a tools ability to bite the bit. Or is this something like Beta and VHS where one format just won out over the other where the product itself was not the ultimate determining factor.

I am trying to figure out why that was the standard at the time.

Not sure if this is a chicken/egg issue, but I think the answer has to do with a tool called a brace.

The first braces were no more than curved pieces of wood with a tapered metal inlet at one end that received different bits. The bit was held in via the wedging action of the tapered end. 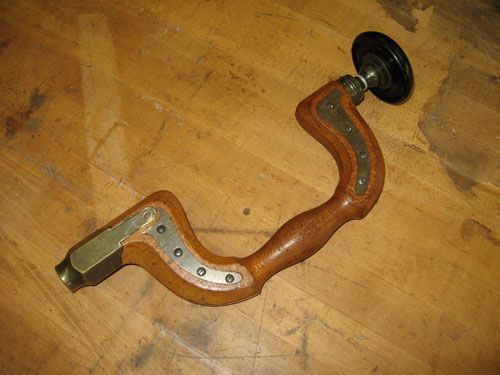 As brace designs evolved, the ends began to resemble more of the chuck-type designs we're familiar with today, though not matching the typical Jacobs chuck. 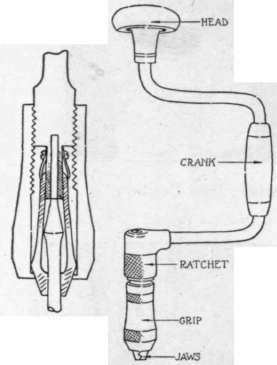 These types of brace jaws are pretty forgiving in terms of sloppiness of the tapered tang end of the drill bit. They are able to clamp onto a fairly wide variety of tang ends with no issue in use. This is very useful when the majority of your bits are hand-forged and have no real uniformity, precision, or universal standards.

Also, hand braces are very forgiving in terms of bit centeredness and eccentricity. Since you're using arm power to turn the bit, you automatically correct for any off-centered behavior.

One additional thing - the bit you have in your question has a lead screw (a.k.a. snail) at the end that helps draw the bit into the wood. This only works well at low RPM, and can be downright dangerous at higher RPM if the bit grabs the wood and whips it out of control.

In the earlier years (before the chuck-type jaws), this could be a problem, since the bit was merely held by wedging. In the later years, you are correct, the chuck jaws would help avoid this issue.

Once power tools started taking over, the circular shank became more popular since it was easier to manufacture. Jacobs chucks work best with a circular bit and are able to firmly clamp a cylindrical shaft very well. The tapered tang ends do not work in a Jacobs chuck at all.

Minor eccentricities of rotating parts are a major issue for power tools since they operate at high velocity/RPM. The previous hand-forged brace bits with their tapered tangs would vibrate like crazy and skitter around the workpiece.

Not the answer you're looking for? Browse other questions tagged hand-tools tools traditional-techniques history or ask your own question.

10
What is this brace bit cutter tool exactly and how is it used?
8
What are the main different types of "hand drills"?

12
jointer cutter head : segmented spiral vs traditional knife design
6
What are the different styles of Japanese Saws
14
How to cut the centre out of a large round of wood
9
Traditional woodworking marks
5
What are the ideal traditional tools to use for creating an inlay?
6
Traditional Japanese method of sealing wood?
0
What is the name of the second tool
6
Traditional Hand Planes Vs. Electric Hand Planer
2
How does a traditional bow-lathe work?