self leveling compound for my box

I would be really grateful if somebody can help me with the design for my box. I got stuck and just can't find the way around. See the images on my website: 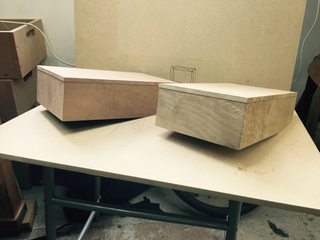 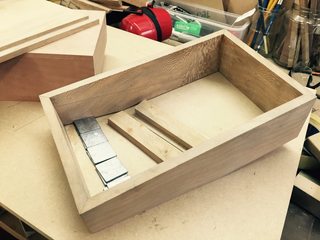 My initial concept was a basic rectangular shape and to make it more interesting I rotated it in two directions (x- and y-axis) just a few degrees in both ways. The shape now looks kind of sunken into the surface and cantilevered on the other end.

I have already made the side faces, which are from solid wood (lacewood), and base and top, which are MDF veneered on both sides. The main issue is that it supposed to look like it is opposing gravity, so I need to add some lead weights on the other end so it holds the position and doesn't tip.

My initial idea was to build a frame which will conceal the weights and at the same time it will create structure for my second base which will be horizontal to the surface. Then I scrapped that concept as it seems to me quite complicated (loads of angles and nothing is orthogonal). I realized that gravity should be my friend and stick to some self-leveling compound that will automatically align the surface.

My question is there any safe resin or any other self-leveling compound that is relatively light, not water-based, doesn't produce so much heat while drying, and doesn't have high shrinkage? Its a wooden box and the base is simply MDF, so it cant withstand very much load.

The idea is to pour the liquid inside and maybe I will tape the contact surface with sellotape so its more less contactless with the compound.

If you have plenty of time you can use plain old polyurethane. Pour some of the fluid into the bottom - say one or two mm and let it dry. Repeat until the desired thickness is reached.

There is also a product referred to as casting resin which is a a two part product that needs to be mixed, but it sets quite quickly (minutes), however it releases a high amount of heat and it shrinks a bit when solid. Pigments can be added to make it opaque.

There is something for leveling wood floors called "self leveling compound". I don't have direct experience with it, but I used to sell it. If I remember correctly you have to put it on in relatively thin coats (1/8").

An example of such a product is Henry 345 - Premixed Patch and Level.

If you go to the flooring section of a big box store, there may be additional options better suited to your need.

Not the answer you're looking for? Browse other questions tagged design materials or ask your own question.

12
How do I calculate the weight threshold for plywood boxes/cabinet carcasses?
17
Is PVC pipe safe to use for a dust collection system?
3
Design for wall-hanging knife holder
4
What material is suitable for a children's desk/furniture?
14
Is there an average depth that works best for book shelves?
4
Supporting a level box on an uneven surface
3
Why do the plans for this bench require a side panel oriented on an angle from a larger piece of wood?
1
Arm for heavy TV
2
Wood selection for casings and baseboards?