What steps should one take to avoid spalting when drying timber?

I am interested in taking steps to ensure that some timber that I am drying does not develop spalting.

My specific scenario is as follows:

Someone looked at this setup and told me that spalting was probably unavoidable in the larger peices, but I find that doubtful. Is it unavoidable? Have I done what I can do already?

The broader question here is what steps should one take to preclude spalting when drying wood? If my specific scenario helps provide context to answer that question, good.

The broader question here is what steps should one take to preclude spalting when drying wood?

Spalting, as you probably know, is the result of fungal attack on the wood. Wikipedia lists several conditions that need to be met for spalting to occur: 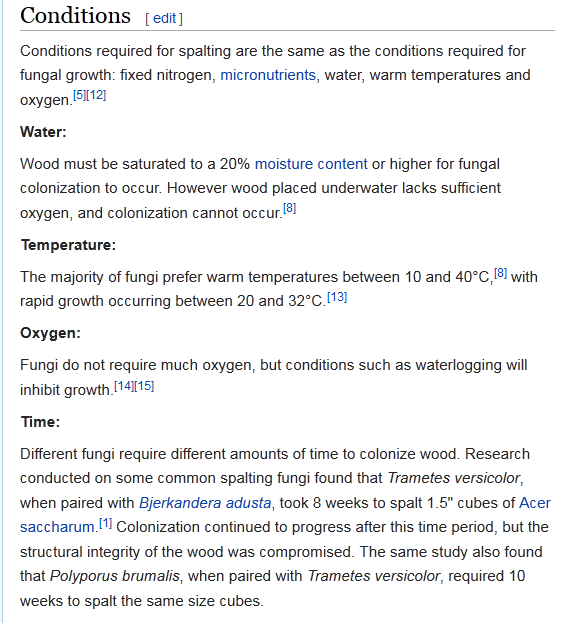 Thus, if you want to preclude spalting, do the opposite of the things listed above.

Since you are attempting to season whole logs, they will retain water much longer than if it were sawn and hence be susceptible to fungal attack for a longer period of time.

If you keep air circulating around the entire log to quickly get the moisture content down, it might reduce the risk of spalting. That's a double-edged sword because rapid drying leads to rapid cracking of the log cross-sections. However, you state that you have

which will not help drying at all. Bark helps the tree retain moisture and greatly slows air drying.

If it were possible to place the logs in a totally oxygen-free environment, that would probably be your best bet. However, I doubt you have the ability to do that (unless you happen to live in a submarine or have access to a magical air-tight workshop and can work wearing an oxygen mask).

There might be a fungicide you can apply to the logs, but this is just speculation on my part. I've certainly never heard of one.

I would like to note that the Wikipedia article references a paper on spalting of sugar maple that may be of interest, if you feel like going through the trouble of acquiring it.

Moisture is the largest contributor to wood spalting, especially maple. However, what you are doing will greatly reduce the risk.

The only wood I have used so far that has spalted when kept in a dry place is my yellow birch. The bark is too good at preventing moisture from leaving the wood.

Maple, especially the small stuff you have (under 6"), really shouldn't have any issues with spalting if you cut it an have it drying right away. One thing that could help even more is if you have a dehumidifier in the basement with the wood (at least in the damper parts of the year). This would help remove more moisture.

Now after all that is said and done you want these pieces to be used whole, with the bark on, so even if by some strange chance that they spalt a little, no one will see, notice or care if you are keeping them as such.

A more likely issue if these logs are longer, is splitting as it dries. I had a 6' long piece of maple about 6-7" diameter and let it dry, it split all over the place, but it didn't spalt at all.

Having now dried the above described wood for a year I wanted to share my results from the steps that I took to avoid spalting.

The wood included maple, poplar, and other species of 1" - 6" diameter.

I have now cut into many of the pieces up to 5" in size and have observed little or no spalting. Some of the bark had separated in a few places on some pieces. However, with the exception of the expected end-checking, no other negative effects of the drying process were observed.

Not the answer you're looking for? Browse other questions tagged hardwood wood-drying or ask your own question.

6
When is spalting beneficial for wood?