How do I prevent the rungs of my loft bed from moving slightly in their join with the legs?

I have a fully-assembled loft bed from softwood, in use for about of year, that has head and footboards of this design:

There are 4 rungs on the foot and 5 on the head; the legs are each 85". The headboard feels slightly unstable when pressure is placed on the bed. Even just pulling with my hand against the leg can produce this. I want to figure out a way to remove all movement and make it feel sturdy (I assume the existing movement is not really unsafe but can feel disconcerting).

The assembly instructions had me glue the rungs into the pre-cut notches and then screw them in using two #7 2-1/2" (drywall) screws into each leg. I already drilled a pilot hole in between the two screws and sank another screw trying to stabilize the rungs, but it didn't seem to make much of a difference. I suspect the issue is that the top and bottom screws may have slightly stripped the wood and are too loose, plus the wood glue may not have been applied properly.

As it currently exists, each attachment point looks like this: 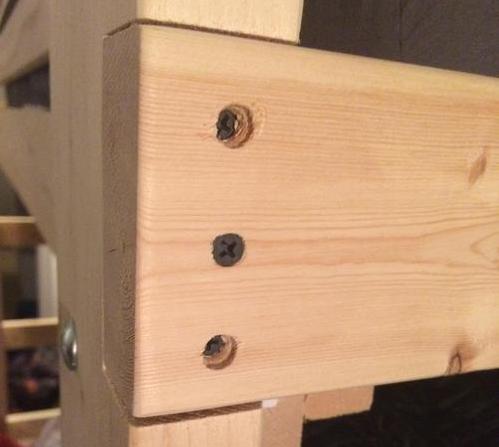 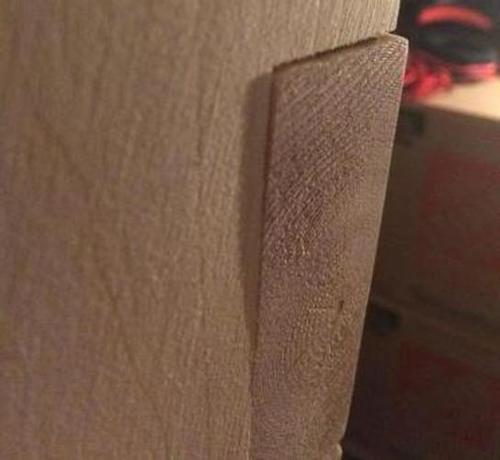 The screws are this deep, but have been sunk past surface level in the rungs so may not have much "bite" in them either:

I'm wondering what the best strategy to fix this might be. I have a few ideas but don't know which is good, or if I'm missing something better:

OK to begin with, you shouldn't be getting any movement of course and because there is some it indicates you have no glue joint and that some or all of the screws holes in the uprights are either stripped, or if pilot holes were drilled originally, that they were a little over-size.

The assembly instructions had me glue the rungs into the pre-cut notches and then screw them in using two #7 2-1/2" wood screws into each leg.

Glue + screws would normally be more that sufficient for a secure and long-lasting joint on rungs such as this. There are two reasons I can immediately see for why they've begun to move.

Firstly, there appear to be two problems with the screws. The length suggested was not nearly long enough and additionally those screws look to be drywall screws. Passing reference to drywall screws in this previous Answer. Re. the length, screw length should be three times the thickness of the piece being attached where possible. Where that's not possible the rule of thumb is as long as you can get away with, i.e. just a little shy of poking out the opposite side of the piece you're screwing into.

Secondly, joinery. The half-laps/halving joints that the rungs go into should be cut to a tight fit, the amount of play in the one joint you photographed closely is very far outside acceptably tight and ideally (note: not essential) the joint should be shimmed or packed out so that the rung can't move within the notch.

Initially one simple way of doing this would have been by positioning the rung at the bottom of the joint (hard up against the lower edge of the notch) and then just inserting a shim at the top.

Anyway, if that joint is typical then the others should be addressed as well if you're doing this one. But as I say this isn't essential and with a solid glue fixing and screws holding properly the rungs should be perfectly secure enough for service.

just try unscrewing each rung and re-applying wood glue on the contact point between the leg and rung, then re-screwing it using the existing screws.

This is partly the ideal fix.

Yes you should re-glue, but the mating surfaces should be scrupulously cleaned of old glue first before re-glueing, by scraping and then by sanding. This is because wood glue is not actually strong, well-glued joints are, and in practice a strong joint is formed only when the layer of glue is very thin between the two pieces of wood.

You shouldn't re-use the existing screws as they're not holding in the wood, so unless you pack out the holes they'll continue to do very little to hold the rungs in place. If these are drywall screws they should be replaced with wood screws anyway, and when doing so you can move up to a larger gauge so that they hold in the wood firmly. Note: you may need to drill larger clearance holes in the rungs to accommodate the larger screws.

Once you're ready to re-attach the rungs you want everything lined up and ready to go before you apply fresh glue, as you want no delay between applying glue and bringing pieces of wood together. Apply fresh glue generously to one face, position each rung and drive the new wood screws home (this provides the necessary 'clamping' force to ensure a good glue joint). As the screws snug up firmly will get some glue squeezing out of each joint, this is normal, but be prepared for it and wipe it away with clean, damp cloths.

Leave the joints for about six to eight hours for the glue to dry before subjecting them to load, or overnight if possible.

7
Are there specific types of screws I should use for woodworking?

8
Attaching Legs to a Table
6
What is the maximum width for a full cross grain glue up?
4
Hanger bolts on chair legs keep coming loose
1
What type of bed rails connectors make the best connection (the most rigid)
4
How to calculate rotation for three square interlocking angled legs?
1
What knock down hardware can I use on this platform bed frame?
2
Reusable Desk design: how to join pieces?
3
Loft bed design
2
advice for glue-and-screw butt joint
4
Options for attaching bed legs at an angle