I'm thinking of starting a beehive this spring and I want to make my own beehive boxes. I realize that there are kits you can buy and assemble, but I like woodworking and have most, if not all, of the tools necessary for the project.

My question is what joint would be best on the corners of the brood boxes and supers, considering they'll be exposed to constant weather? Basically, all these boxes consist of are four sides and an inner lip to hold the frames the bees make honey on. I will either make it out of the solid common board from Home Depot or, more likely, a high grade 3/4" (1" on label) plywood. I plan to buy some for the owl boxes I want to make anyway.

Besides just wanting to build the boxes myself and save a little money, I'm also not impressed with either the kits or some of the self built boxes I've seen on the internet. While they work and I'm sure they hold up for a number of seasons, I think that some are better than others. For instance, I see people who screw handles onto the boxes and others who use a circular saw to make a scalloped cut out of the side of the box with a lip to hold onto. The scalloped cut will last longer, because eventually water will work between the screwed on wooden handle and the side of the box and begin rotting it, where the scalloped cut won't get much rain in it and the little moisture that does get in it soon evaporates.

So in that line of though, I don't know how to do the corners. I've seen ones where they just line them up square and screw and glue them. I've seen another guy who cuts a rabbet in the end of the side board just wide enough for the end of the long board to sit in it. While the first method seems stronger, the second method covers up the end grain. Lastly, I've seen people do dovetails. While this seems like the strongest method, I worry that each seem will potentially wick water into the joint and start to rot it. Granted that whatever method I choose, I will be either sealing it with polyurethane or paint, it will eventually wear off. I'd put plenty of wood glue in any joinery I choose to help keep the water out.

I just want to know what joint will stand up to the weather best. A hive box will be outside 24/7/365. I'm trying to think my way through and prevent as many problems as possible. I've even thought of trying the following joint and cutting it off flush on the side. Thanks for any help. 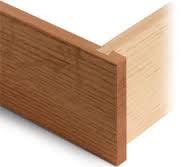 The sliding dovetail joint like the one in your picture will work fine, but in the corner a half sliding dovetail (like this) would be more stable since the outer feather will be thicker overall and will have full-length fibers rather than mostly cut-through fibers.

My attempt at drawing a (exaggerated) sliding half dovetail: 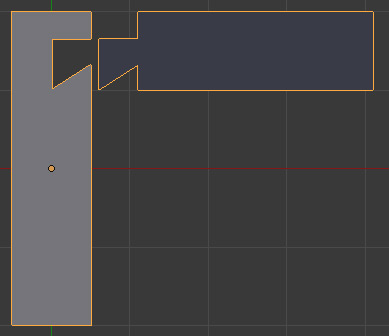 A simple, straight sliding joint may do fine, too, and may be easier for you to manufacture. It is indeed a lot easier to do (can use a plow plane or simply the table saw if you have no router, for example) and my guess is that it's what 90% of all people will indeed use for its simplicity.
The disadvantage over the half sliding dovetail is that the form by itself does not prevent the two walls of the box from falling apart, it relies solely on the glue's strength to do that (a sliding dovetail will hold pretty much the same without any glue at all). However, given a nice amount of PU glue, that is probably not much of an issue, even in presence of 24/7/365 weather. The wood will likely rot away before the PU gives up, and if you use a weather-suitable highly resistant wood, something like e.g. robinia or bongossi, and coat it as you intend to do, this will last for many years. There's a robinia bench standing on the terrace at my grandparents' which was made decades before I was born.

Simple, and will do the job, with glue: 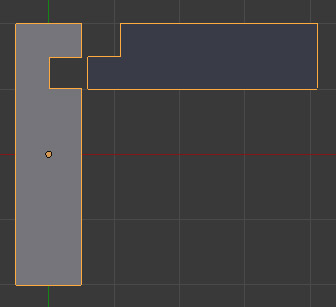 Any of the "sliding" joints works in a way like a baffle to water (and wind) that might try to creep through, which is a good thing.

You will definitively want to stay away from any type of "finger" joint (straight or dovetail alike) as you would use on a drawer or on a decorative box. Although they look cool and offer plenty of glueing surface, they also offer plentiful cracks for water to crawl in, and have no "baffle" effect.

And here's my take on it. This one is for bumblebees, not bees, but I guess it's the same thing.
As proof-of-concept to show that it really doesn't take a lot, I didn't use super special power tools, but made this one with hand tools, notably ye Goode Olde Veritas skew rabbet plane seen in the first picture (but I guess you could do with any other plane and a piece of wood as guide, too).

The pieces fit together snugly, presumably air- and watertight, and indeed fit so firmly that once all rabbets are in place, it takes considerable force to pull the construct apart again, even without any glue. That's because each piece is held not by one rabbet, but by three (four, for the bottom). I'm almost tempted to not glue it at all, it would probably last 10 years like that, too...

Too dark to do the roof now, and need to get tar paper for that, too. Next week! 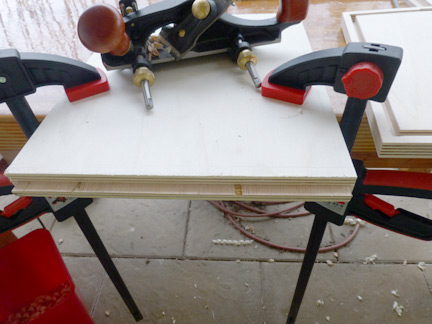 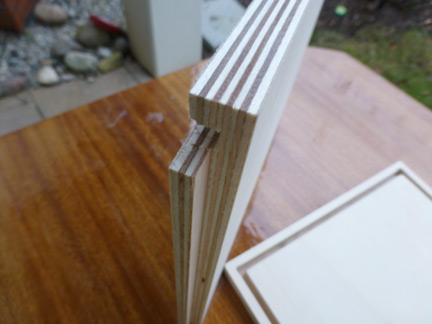 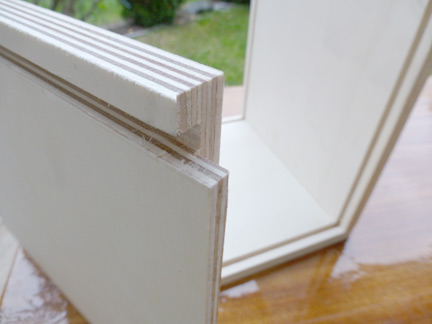 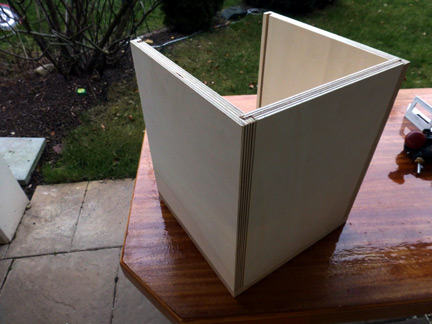 It really depends on the tools you have at hand. The more important consideration is proper sealing, as any joint will degrade much faster with direct exposure. Paint is best, but a deck sealer would also work well.

A basic sturdy joint would be a reinforced butt joint, which is nothing more than a block of wood glued and screwed to each piece of plywood on the inside of the corner. The upside is that there's not a joint to cut. The downside is the block of wood intrudes.

If the block would get in the way, the next option I would consider is a pocket screw joint. They go together quickly, are designed for use in plywood, and hold up very well. This is how most cabinets are made. Don't worry about the expansion and contraction of the metal loosening the joint, weather actually causes more damage to wood joints.

If you would like an all wood solution, the two keys are gluing surface area and protection from moisture. A finger (sometimes called box) joint would be an excellent choice, and is the one I would use personally. While a proper dovetail joint, splined dovetail, and other drawer joints would work alright, plywood is not well suited to traditional joints.

Every old beehive box I have ever seen was made with pine and built with box joints, and no glue. It was held together with, appropriately so, box nails, one in each "finger" in both directions. With the cover over it and proper setting it will last for many years. 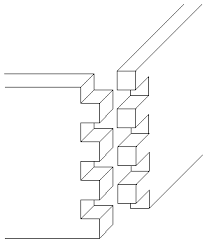 In counter to all the other answers saying "lots of sealant", I would go for "no sealant at all". I would also avoid glue. My concern is that for a bee hive you have a lot of insects you want to keep healthy in very close proximity to your glue/sealant. That also means no plywood.

Use a durable wood and a decent roof and the beehive should outlast you. If you are good enough at woodworking, a dovetail rebate should hold together with no other fasteners. I would have to use screws (at which point I probably wouldn't bother with anything other than butt joints.

Not the answer you're looking for? Browse other questions tagged joinery plywood boxes or ask your own question.

10
Properly securing a ramp
6
8 to 12 mm plywood box joints: brackets vs glue(box joint) vs screws
13
4'x8' length cut - circular saw, table saw, or panel saw?
4
Tenon dimensions and orientation
2
Search for metal brackets to join 1/4" plywood boxes
4
What is the best finish for a laser etching on birch veneer plywood?
3
Minimum Plywood Thickness for small "crate"
0
Is it okay to use pocket screws to join sides to front/back rather than the opposite?
4
What are the advantages of coping a joint vs. mitering?
0
Attachment method for heavy duty plywood box