What part of a cabinet is the “carcass”?

What is a carcass (or carcase)?

Does the term have general usages in woodworking outside of cabinetry?

A cabinet, for example, consider the American style one on the right: 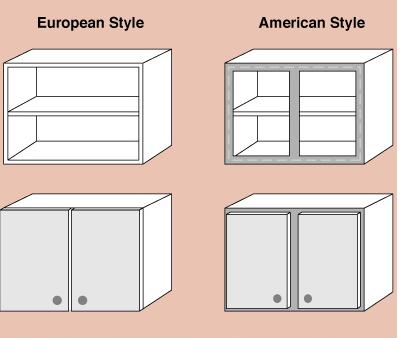 If I remove the doors, face frame, and shelf, am I left with the carcass? What about the back panel, is that part of it? Is it even less than that? Can I remove the top and bottom panels and just call the sides + back the carcass? Does the type of joinery used (e.g. detachable vs. permanent) affect it?

The body of the object. The case or other major structure that carries the door, drawers, shelves, et cetera. May be a box of some kind, may be a tabletop and supports, may be other. Usually the thing that gets the name -- the chest in a chest of drawers, the workbench in a wokbench with various storage and vises, the case in a bookcase -- but not always (though I don't have a good counterexample right now).

I agree with keshlam, but I want to share other info on the other aspects of your question.

The carcass is the main framework, or body, of the object. It is what remains after you strip all coverings, doors, front-face panels, frames for these panels, and (non-structural) shelves. It is the framework of a structure, and is generally not seen.

A "frame" would be part of the carcase if the word was employed in the general sense of "chassis" or the "structure". The word "frame" can also describe a particular form of construction/joinery, as explained in the next quote.

The European cabinet example you have shows a frameless carcase (a.k.a. "full access" cabinet) -- the door panel hinges are attached onto the carcase directly. The American one has a face-frame -- door hinges are bolted on a face trim which is itself attached to the carcase. The term "frameless carcase" would suggest that frames could be part of a carcase, but it would be more accurate to say that they are rather attached to it, like in American example.

Fine woodworking makes an even more clear-cut distinction between frames and carcases:

Where do panels fit?

That quote above doesn't mention panels as being a category. The word "panel" can ambiguously mean a series of (one or more) boards side by side forming a flat surface. Or it can mean a decorative pane. For instance, each of the constituent faces of the box that constitutes a carcase is itself a wood panel. So whether the back panel of a kitchen cabinet constitutes integral part of the carcase would depend on its function being structural or not, like keshlam mentions.

I don't recall encountering the spelling "carcase" outside of woodworking texts, e.g. to designate the remains of a burnt building, or of a turkey dinner, or cadaver. But, apparently usages in older texts are found for both spellings in all the possible different definitions and terminologies. So neither is specific to woodworking, nor does there seem to be definitions covered by one spelling, but not by the other -- with the exception perhaps of "carcass" as an early incendiary projectile device.

As far as other uses of the word go, within the realm of woodworking, aside from (1) the carcase of a cabinet, and (2) carcase construction mode, I haven't found anything interesting.

Popularity of Carcass vs Carcase, in English texts over time from Google-N gram, all definitions combined:

Not the answer you're looking for? Browse other questions tagged terminology cabinetry or ask your own question.

12
How to extend a routed rabbet to the inside corners of a cabinet door or other frame?
12
How do I calculate the weight threshold for plywood boxes/cabinet carcasses?
13
What are some best practices and techniques for building cabinet boxes with plywood?
5
How do I remove a liquid deglosser from my cabinet doors?
5
Furniture name for waist-high floor-sitting shelf cabinet thing
2
What are the best ways to glue thin edges?
0
What are the standard dimensions for cabinet making?
1
Why do all soft close hinges require 1/2 inch or 12mm holes on the cabinet door?
2
What is this sliding cabinet door with “shades” called, and where can I find info on it?
0
Painting cabinet doors