What is the purpose of Maloof oil/wax and how is it different than regular paste wax?

I'm finishing up a project and decided to use Sam Maloof Poly/Oil Finish as the primary finish. 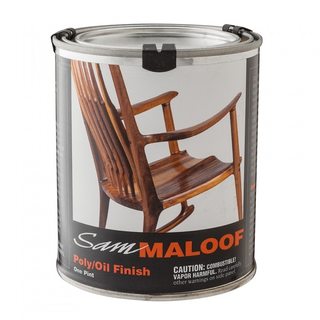 I typically like to put paste wax on my work when I'm done -- I like the feel and I think it helps protect the wood under certain circumstances (e.g. water appears to bead up better on oil-finished wood with a paste wax compared to just oil finished wood).

I noticed that the Maloof oil/poly can suggests using Maloof Oil/Wax as a top coat. I assumed that the oil/wax was just like the Liberon paste wax I've used, but I took a look at the MSDS and was pretty surprised. It looks like it's basically just BLO+tung oil and a really small amount of wax. Is this a common finish? There seems to be so little wax that I'm curious if it has any effect at all. Qualitatively what is the difference in a finish with using something like this (e.g. oil and a really small amount of wax) compared to paste wax? Do they serve different purposes in the finishing world?

On a related note this seems really easy to make. Am I wrong in thinking that I could just add 1 part BLO, 1 part tung, and some beeswax flakes into a glass jar and melt/mix it using a double boiler?

Is this a common finish?

No. Oil/wax blends are not common and I think for good reason. Looked at a certain way it's because it combines the worst of both materials, something I don't say lightly.

Qualitatively what is the difference in a finish with using something like this (e.g. oil and a really small amount of wax) compared to paste wax?

Excellent question. The answer might be a very uncomfortable one for fans of Maloof's work or of the finish on their own pieces: it's likely to be softer and more easily marred.

There's no getting away from these. It's because they're soft that neither should be applied as a surface coating of any significant thickness.

As the Comment above from keshlam rightly says, Maloof experimented until he got the effect he liked the most. He was going for appearance, and possibly feel, over wear characteristics I promise you, because an oil finish normally would never go over a film-building finish — oil finishes are supposed to go in the wood, not on the wood for a very good reason. If you don't wipe off the excess after using BLO on a piece and let it fully 'dry' (might take a month or more) you'll easily see why.

I think the nature of Maloof's work should be strongly borne in mind in considering his choice of finish; even before he had a big name and became one of the brightest stars of American woodworking his work was what you might class as art furniture, or fine furniture if you prefer. Stuff like this is, to be blunt, intended to be babied. They're not daily users in a busy household with young kids! Well not unless the pieces are safely locked in a room the kids don't have access to :-)

Unrelated to the main question, a quick bit about Maloof's oil/poly blend.

I think anyone who currently uses it or is tempted to (either bought or made at home) should think carefully about the role of the tung oil in a mixture that already contains linseed oil. What purpose does it actually serve?

On a related note this seems really easy to make. Am I wrong in thinking that I could just add 1 part BLO 1 part tung and some beeswax flakes into a glass jar and melt/mix it using a double boiler?

No you're not wrong and I always encourage people to make this kind of thing themselves, rather than buy a commercial version (which are sometimes disproportionately expensive). The cost is only part of it though, by making something yourself you get a better appreciation for the materials, you can tailor the mixture to suit your own tastes, the local conditions and other factors.

The above points are often emphasised in guides on making homemade versions of blended finishes, others being "Danish oil", "tung oil finish" and "teak oil". But a key aspect that's often not expressly stated is that it means you have all of the primary ingredients separately. They are far more useful and versatile as individual components than in a single readymade mixture.

Commercial paste waxes are typically a blend of one or more waxes, e.g. paraffin wax or beeswax with a little carnauba (for added hardness), plus the spirits (in the old days it would have been turpentine, so they smelled a lot nicer) that make it a paste at room temperature rather than a solid. And that's it usually.

As the simplicity of the ingredients suggest, this is also something where an equivalent is easily made at home.

Not the answer you're looking for? Browse other questions tagged finishing finish-selection or ask your own question.

15
Finishing schedule for live edge walnut slab
3
Finish after using chalk paint
5
Do I need to thin boiled linseed oil?
6
What is the difference between wiping polyurethane and wiping varnish?
4
Finishing with Arm-R-Seal After Oil and Wax
3
What to finish my pine loft bed with?
3
Remove wax from wood grain
2
finish for a very large pine dining table — is beeswax crazy?
4
Finishing a beech desk top (Ikea Gerton), suitability of tung oil