Cutting tight miter joints for a frame around an existing object

I recently finished most of a practice project (a large lap desk). It looks like this so far: 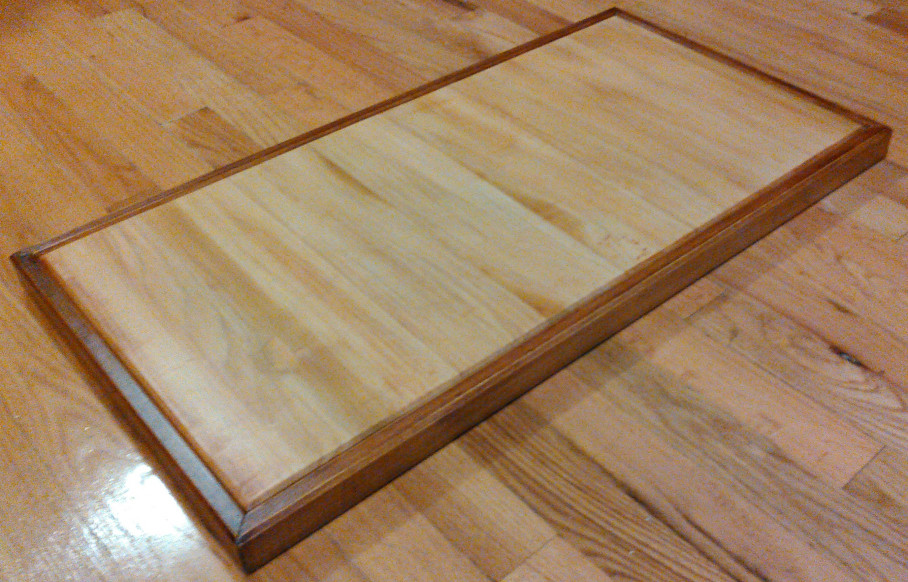 I made a ton of mistakes but the only one I can't figure out how to fix next time is the frame around it, specifically gaps in the miter joints because the sides were not the correct length (not because the angles were significantly off). I ended up with massive gaps on two of the corners: 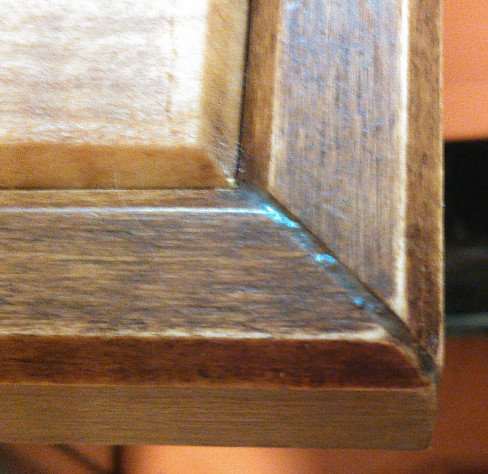 The piece consists of a 3/4" thick panel made of joined boards, surrounded by a rabbeted, chamfered, mitered frame cut from 2x2s. The cross section of the frame looks like this, the green marks indicate the face that needs to match the length of the panel edges (I joined the green edge to the panel with biscuits): 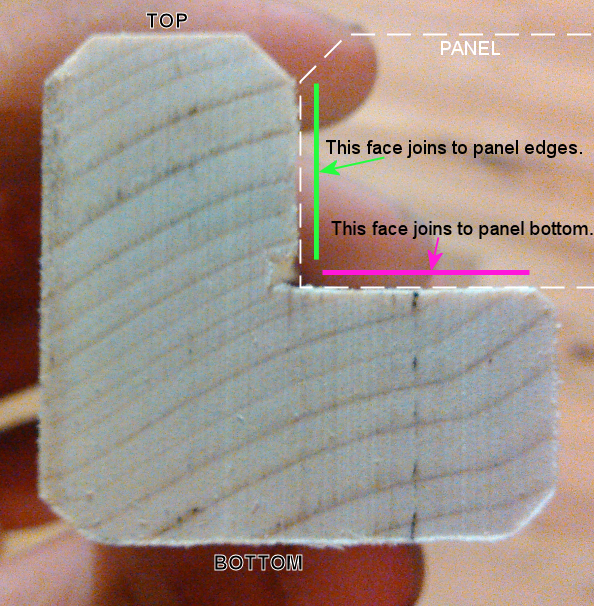 The process I went through to fit this frame was awful:

So, my question is: How could I have constructed this frame with no gaps? How can I create a tight mitered frame around a fixed size, pre-existing object?

I read Perfect miters every time and watched a video linked from there. I also read this trick. But I can't understand how I can apply any of this, because it all seems to detail how to get the angles right without caring about the final size of the frame. I also am having trouble understanding how the sleds described could be used here - I think I accomplished about the same thing in step 9 above.

It seems to me that the biggest challenge here is that my reference edge is actually in the center of my frame.

I do not know what good marking / measuring / cutting techniques are required to make this happen. I am frustrated because I keep trying to research this and hitting dead ends where people care about the precise angle but don't mind shrinking their frames by 1/16" or so in the process.

How can I create a tight mitered frame around a fixed size, pre-existing object?

OK I'll tackle this one first as it's actually most important: in this context you don't want to.

To pass on some sage advice I read only recently: new woodworkers should resist the urge to picture-frame a panel made from solid wood [of any significant size]. Just to add a little bit of my own, unless you've made provision for movement across the grain, such as is commonly done on frame-and-panel cabinet doors.

The reason is that solid wood will always expand and contract across the grain, and even where the movement is modest (smaller panels, certain species) it will still exert enormous forces on the frame if it's constrained, and try to push the mitres apart. It is very likely to succeed. If the mitred frame is somehow built stoutly enough that the joints can resist the expansion the panel itself would suffer, as the pressure needs to be relieved somehow.

How could I have constructed this frame with no gaps?

I think it's really very simple at heart, it's just that we get confused by conflicting or competing tips that don't always go together. The basic thing is not to work by measurement but rather use the piece you're framing to directly mark your frame members — same basic way drawers should be fitted to the openings they are being built for, allowing for vagaries in the way the piece is, not the way it should be.

So let's say you start with a single long piece of moulding. Cut two long and two short frame members clearly over-long, then piece one corner together, fit it to the thing you're framing and work out from there. With the mitre held firmly closed and tightly against the first corner mark your short member and your long member directly from the short and long sides of the piece.

Once you get to cutting, your step 5 is the thing to avoid obviously! Even 0.5mm too short is a big deal (about 1/50"). So saw carefully outside of the mark. You're not trying to get this perfect in one go, it's OK to have one or both pieces a tad too long after cutting; you can always trim off more wood, much more difficult to put it back once it's been removed :-)

The traditional way of incrementally trimming mitres is still one of the best methods, and that's with a very sharp hand plane and a mitre shooting board: 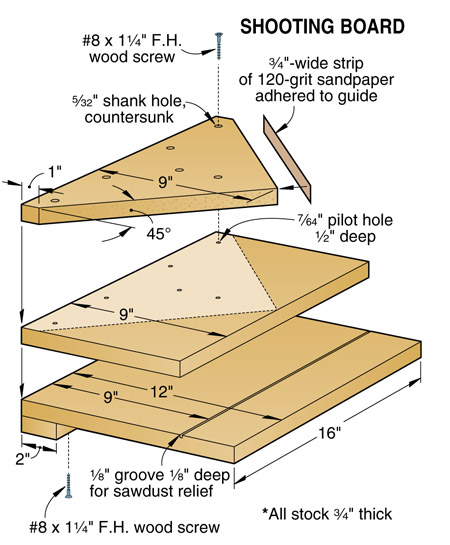 Planing removes hundredths of a millimetre (thousands of an inch) per cut so the trimming is in tiny increments. Very difficult to overshoot your mark removing this little material at a time.

So let's assume your pieces were overlong at first test fit, now you pare on the shooting board, test, pare, test, pare. Rinse and repeat until the fit is perfect.

You follow the same basic procedure for the next long frame member, working out from the second perfect mitre joint that you just created. The final short frame member can be tricky, but remember you just need to sneak up on the fit. Start from one corner and trim only the other end until as you check the fit the mitre is now dead-on.

Not the answer you're looking for? Browse other questions tagged technique measurement miter-joint or ask your own question.

19
Perfect miters every time
15
What is a shooting board?
7
How to build a picture frame?
4
How accurate does 'square' have to be in your project? What is acceptable?
0
What are the steps in building a shooting board?

6
Table saw technique, cross-cut dados on multiple boards
5
Stabilizing thin boards, with trim, vertically on a router table
9
How could I have designed this cabinet to avoid assembly and alignment problems?
4
Bad technique vs inadequate equipment for beginner woodworker
12
How can I accurately cross-cut a board that is too wide for my table saw?
4
Is a quality miter gauge precise enough for cutting picture frames?
3
Wood movement with L-shaped mitred leaning shelf
1
What knock down hardware can I use on this platform bed frame?
0
How do you create an organic or chiseled edge on a wood slab?
0
How to join miter cuts for picture/sign frame?