It will probably have to wait until next summer but I am going to build my first woodworking bench soon.

I want to have at least one vise on it. I was thinking the front or leg vise. They both clamp in the same location.

I am hoping to use this to help with sawing dovetails. I understand that it is not the only way but I feel more comfortable with the boards in a vertical position. I would like this fact not to distract from the actual question of vise choice. Merely an attempt at providing context to the question.

I'm sure that I know the basic differences between the two but I want to be sure I am not overlooking any feature or potential draw back. I think both would work for what I am trying to do. What are the functional differences between a leg and front vise? What criteria might make me choose one over the other?

I think you've already hit on them pretty well in your Question.

For what it's worth, you can build a front vise entirely out of wood too. 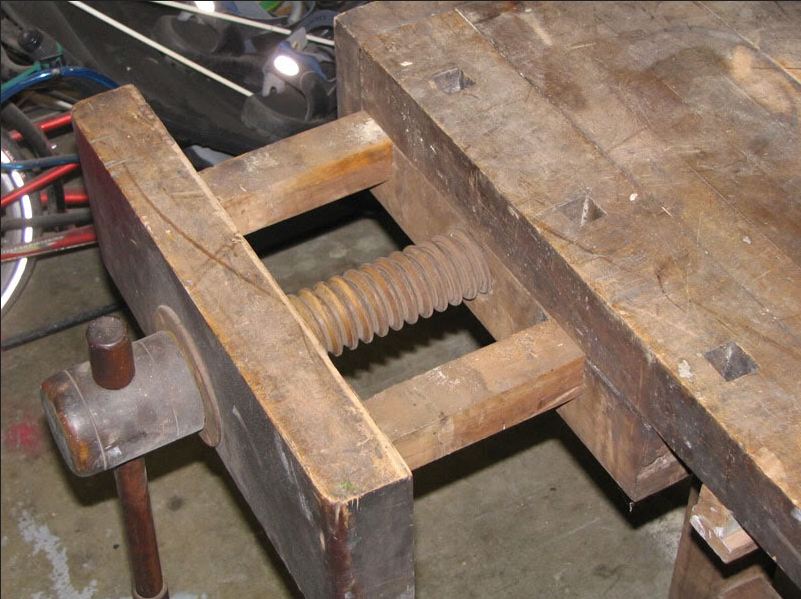 I'll try to expand upon some more considerations below.

Face vises are generally like the wooden one shown above. They have a center screw for tightening/loosening the vise with a set of parallel guide bars to help keep the vise from racking.

As you stated, they generally have a shallow throat (the distance between the top of the screw and the top of the vise). This means they may not be able to hold some items as securely as other vises since there is less clamping surface.

When clamping with a face vise, if you clamp the piece in one end of the vise, you will want to clamp a rack stop or another similarly-sized piece of wood in the opposite end to keep the vise face from racking.

Since a face vise has a small footprint, it may be possible to slip a drawer carcase over the vise to fix it in the jaws. I can't find a picture of this online, but I've done it before. This is not possible with a leg vise because of the leg vise's length.

Leg vises act like a Class 3 lever (mechanical advantage always less that 1.0). Consider the image below (from Lake Erie Toolworks). This has a similar criss-cross bracing to the Benchcrafted example you provided. 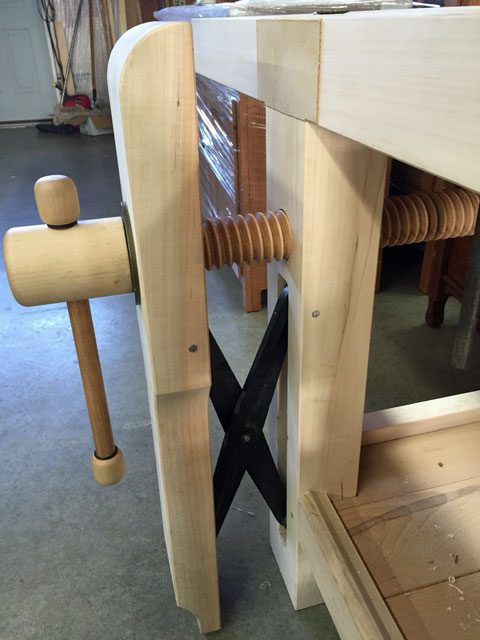 Just so you're aware, the criss-cross (aka St. Peter's Cross) is nothing new for leg vises. It's just another way that craftsmen have historically found to cope with the balance of forces at play with this vise.

Compared to the face vise, the leg vise has a deeper throat but it has a narrower face. Thus, it can clamp things more deeply in the vise and is able to apply a higher force to a smaller area. Also, because the face is much narrower, leg vises usually don't have issues with racking like face vises do.

However, since leg vises have a narrow clamping width, they usually need the help of a deadman to hold longer stock. You'll find these on just about every Roubo-style workbench. 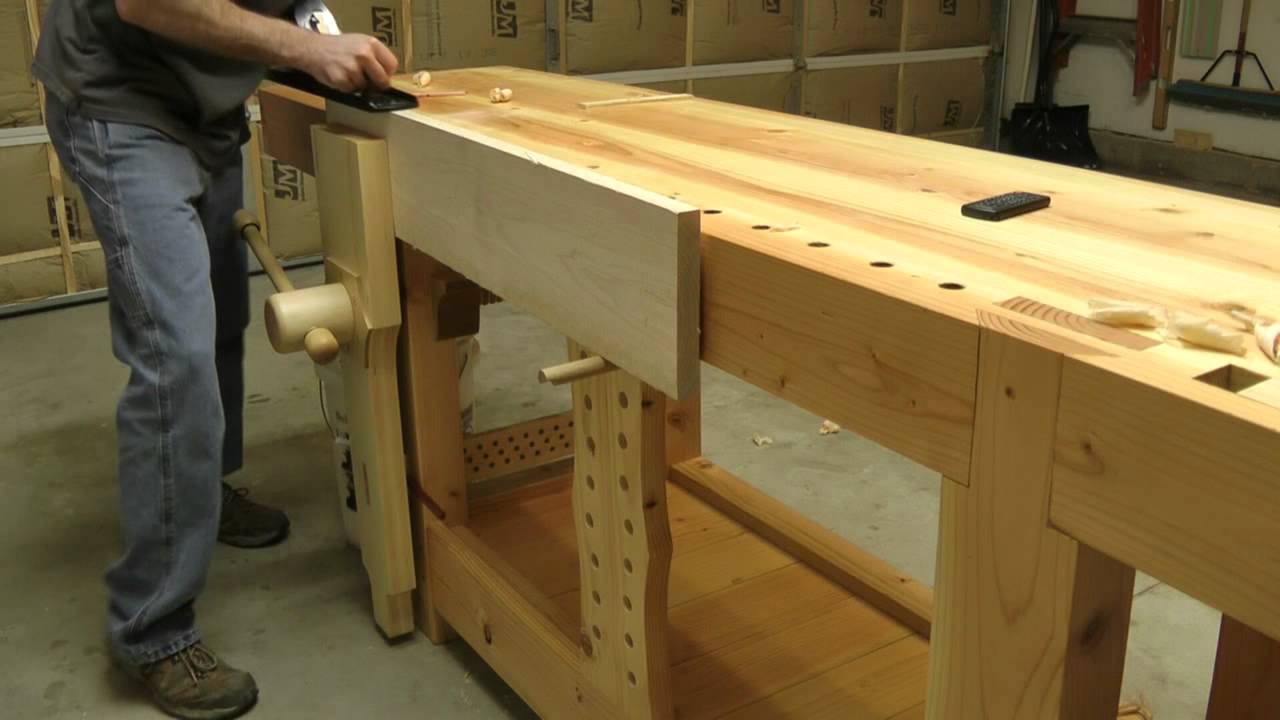 I am hoping to use this to help with sawing dovetails.

I know your question specifically asked about leg and front vises, but you mention doing dovetails as one impetus for choosing a vise. I offer that building a Moxon vise is a better solution that either for doing dovetail work. 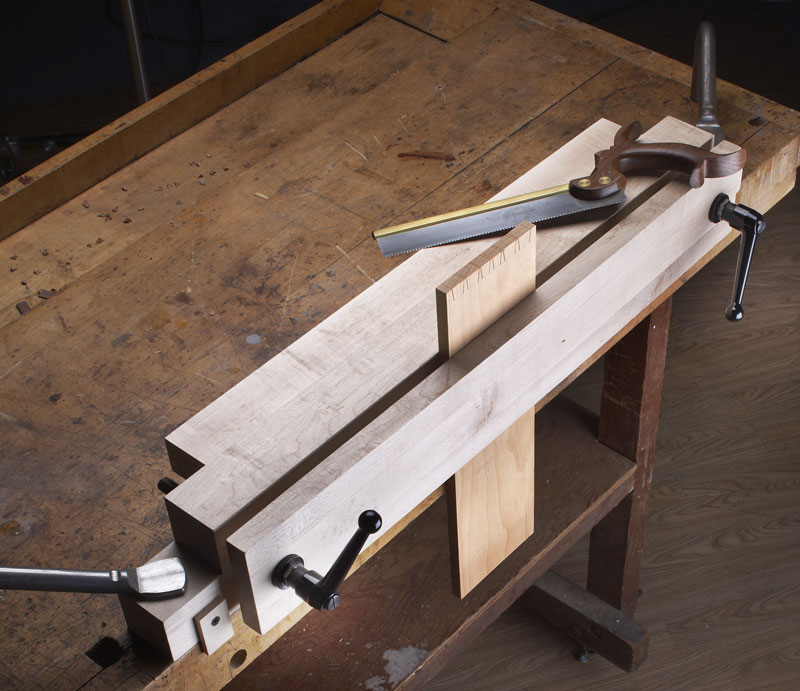 The Moxon vise is especially suited for dovetailing since it firmly clamps boards in the vertical position at a height that is comfortable for sawing dovetails. Spend a couple hours hunched over a leg/front vise sawing dovetails and you will come to appreciate the joys of a properly-constructed Moxon vise.

Leg vise can be built from solely wood components and has a deep throat.

Yes, but actually any type of vice can be built entirely from wood if needed or desired (as many were in the past). It usually requires that the components are scaled up somewhat for needed strength, but in essence you're just substituting a threaded wooden dowel for any threaded steel rods, plain dowels for the alignment rods/bars and the jaws are just wood without having a metal plate or some sort.

It also is the largest of all bench vises from what I can tell.

Largest vice is arguably the end vice or one of the twin-screw vices commonly called a Moxon these days: 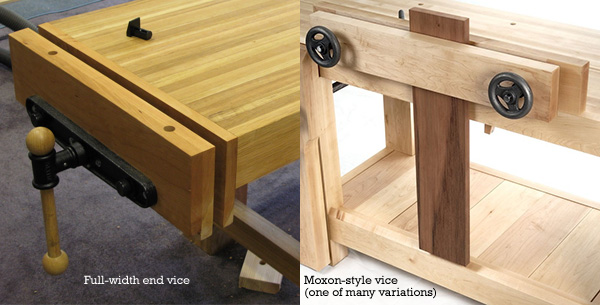 As you can see, these are quite a bit wider than you'd tend to see in a leg vice. But in all cases it does depend on the scale on which the vice is built. It's quite possible to make a smaller Moxon-style vice just as you can have wider or narrower versions of all vices.

It terms of their utility I suspect the answer is actually nothing. They work similarly enough that they could be considered interchangeable. Or to put it another way, someone with either a face vice or a leg vice isn't lacking something significant that the other has.

Honestly I think leg vices tend to appeal to people mostly based on their looks and their traditional style, rather than being a decision based primarily on functionality. Although the homemade aspect of them is also a major factor for some people; however it must be said, versions of all vices can be shop-made.

Now regarding the use you intend to put them to, as I say in my comment above, you can do dovetailing quite happily without any sort of vice if the bench design allows an alternate workholding method, such as the traditional holdfast (or a modern variation), as this extract from one of Chris Schwarz's books shows: 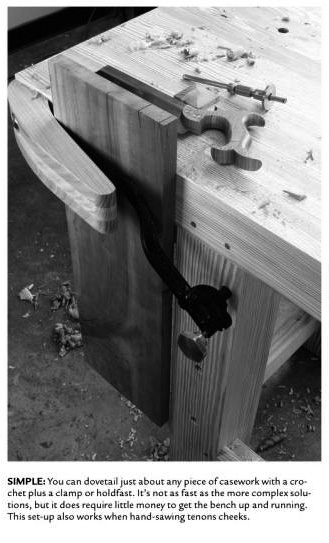 (Note you could also use a pair of holdfasts to hold the workpiece firmly.)

So if you're after the simplest possible option that allows you to hold a workpiece vertically something along these lines is it. You could also use quick clamps, parallel clamps or F-clamps to clamp a board vertically to one of the legs of your bench as a very quick and expedient variation (useful as it doesn't require your bench to have a front apron or any horizontal holes bored in the legs, so in theory this method is adaptable to nearly any bench).

However that's not the solution I think would best suit you. When I started writing my reply in the morning before I got called away I was intending to build towards a recommendation of a Moxon-style vice just as in grfrazee's excellent Answer.

One of the chief advantages of using a Moxon-style vice for dovetailing specifically is that you can raise the clamped height of the workpiece above the usual height of working: 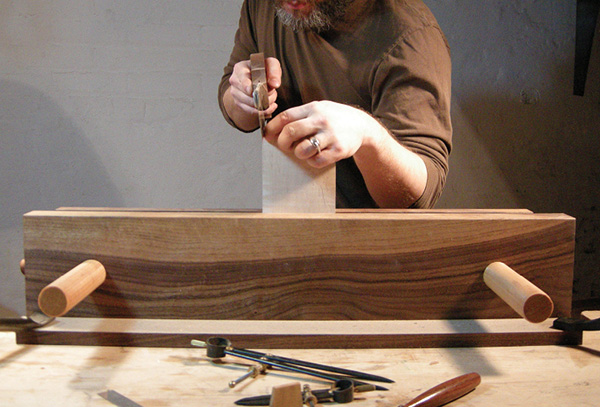 Nearly any vice can hold a board vertical with its top edge at that same height but with a conventional one the clamping surfaces are right at the level of the workbench so the piece is held much further down its length. This of course allows for more vibration as you might get sawing dovetails. When doing dovetails on smaller boards, e.g. for small drawers and boxes, this raised clamping height really comes into its own, so that you're not doing fine, accurate sawing bent over in the same posture you used when planing a board face.

Another of the key advantages of this style of vice as I see it is that they can be built by the woodworker in so many different ways, so there's a version out there that would suit any budget. Some makers use commercial vice hardware for some or all of the working components, others just buy a type of threaded rod with a few matching nuts and go from there, and some make every component from wood: 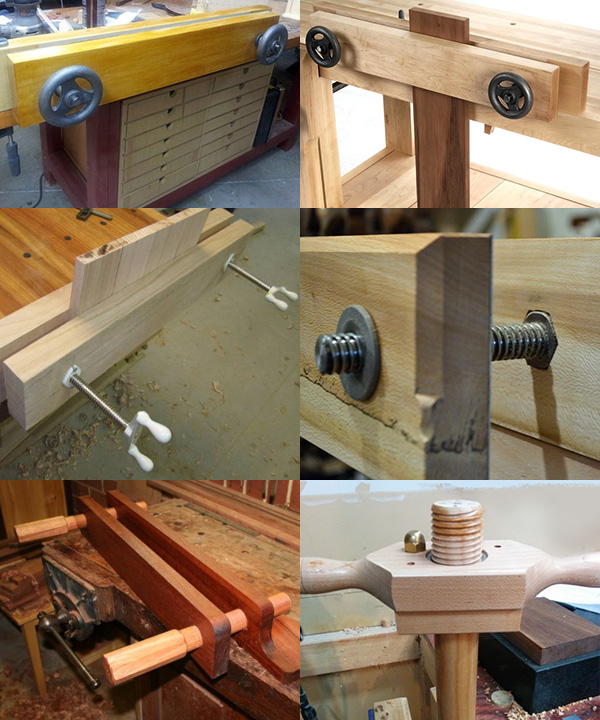 Still others make the vice using nothing more than existing clamps: 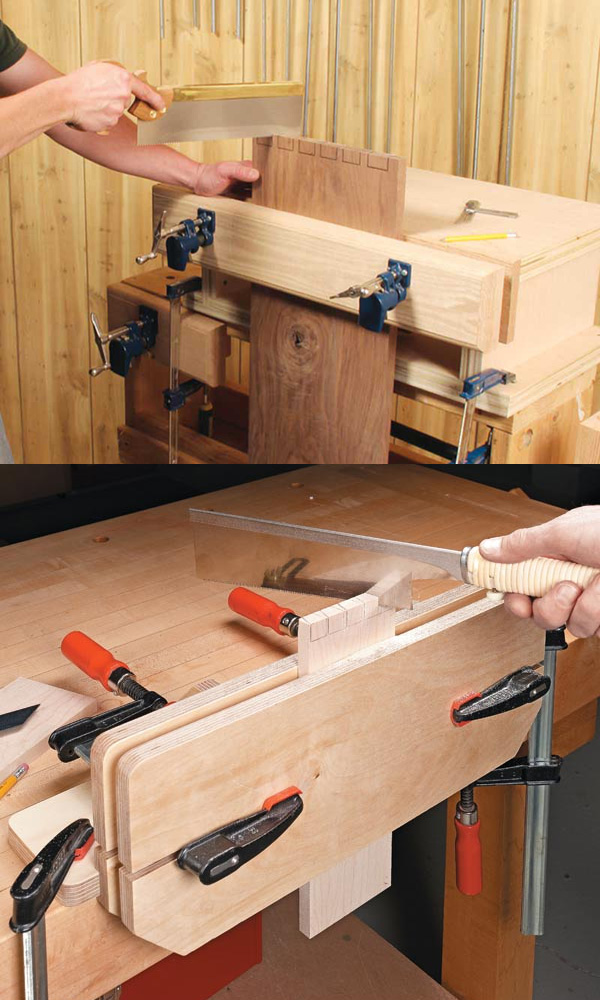 As you should be able to see from the above picture the one made using F-clamps doesn't even require that the clamps be built permanently into the vice, so it's particularly useful for the woodworker with limited space or means.

Not the answer you're looking for? Browse other questions tagged design workbench vises or ask your own question.

5
Considerations when making my own threaded dowel for a vise
4
Is there another name for these heavy duty cam-style clamps?
0
How to cut long angled cuts without a table saw?