I decided to make a bunk bed for my room as it is small and I need a desk. I made a first design in this thread Make a bunk bed 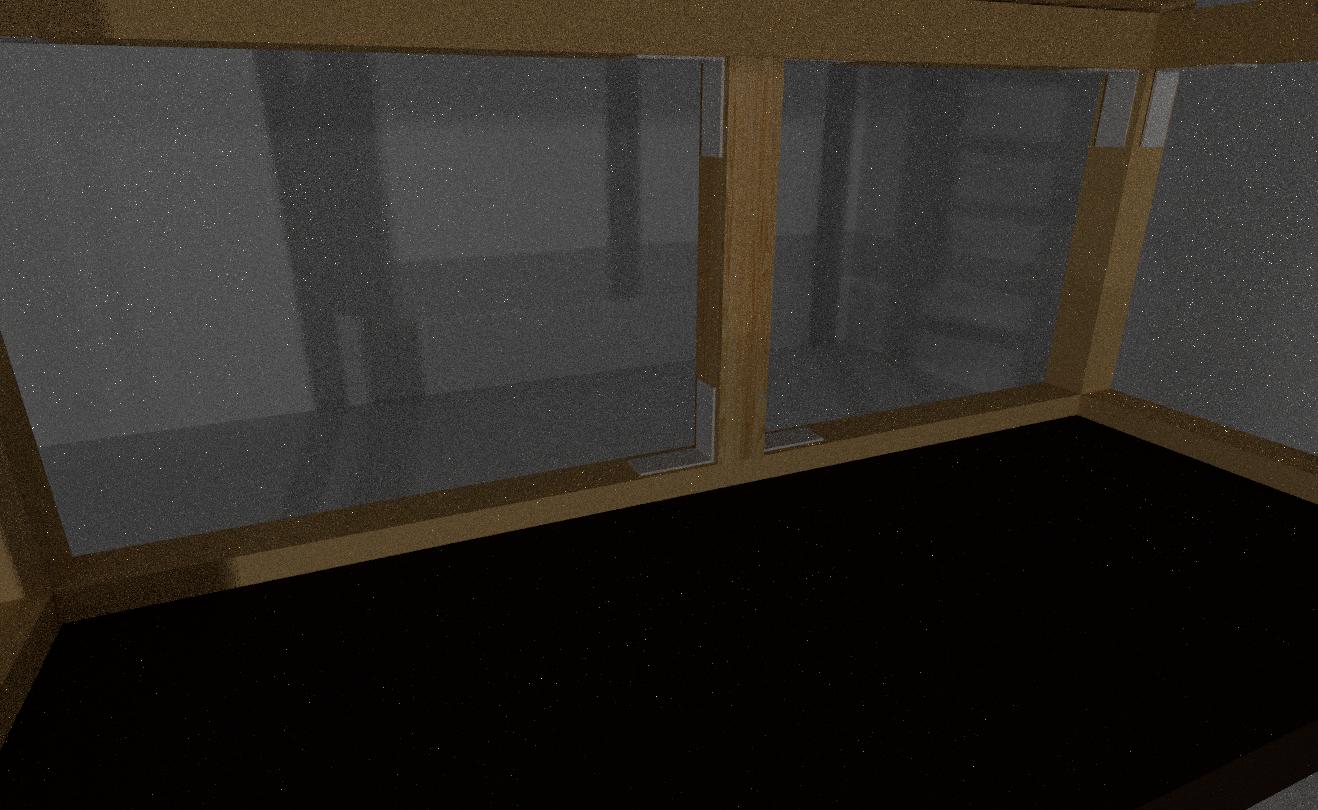 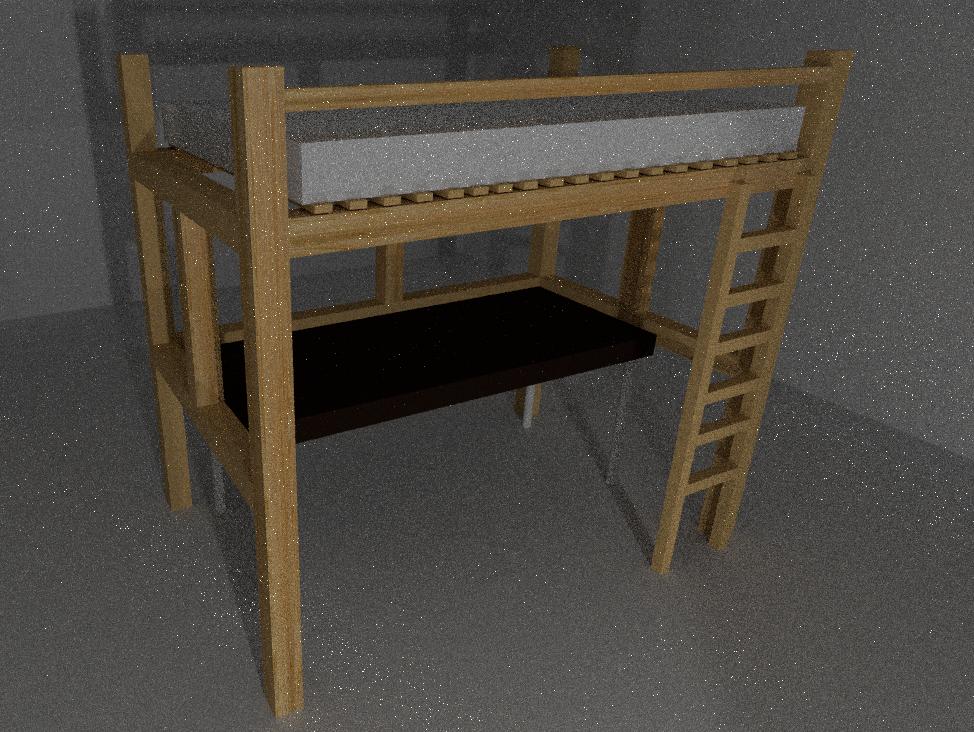 But I realised that all the strength would be on the angle brackets and the screws. So I made a new design where the two main wooden beams are laid on the four vertical beams. It reduced the number of 3m wooden beams by two because instead of having 4x2m beams I had 4x1.4m beams. 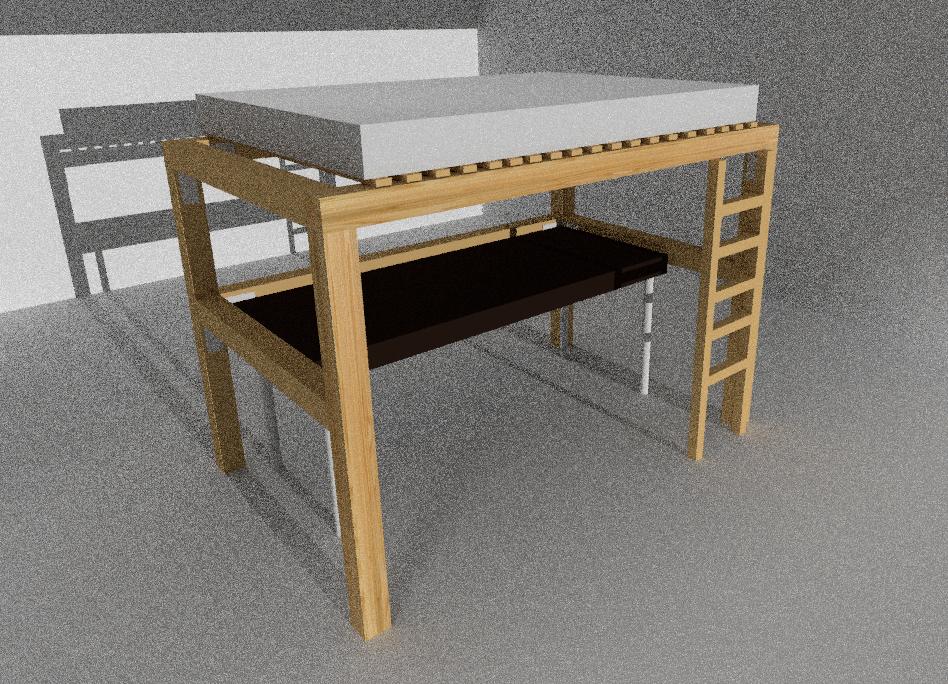 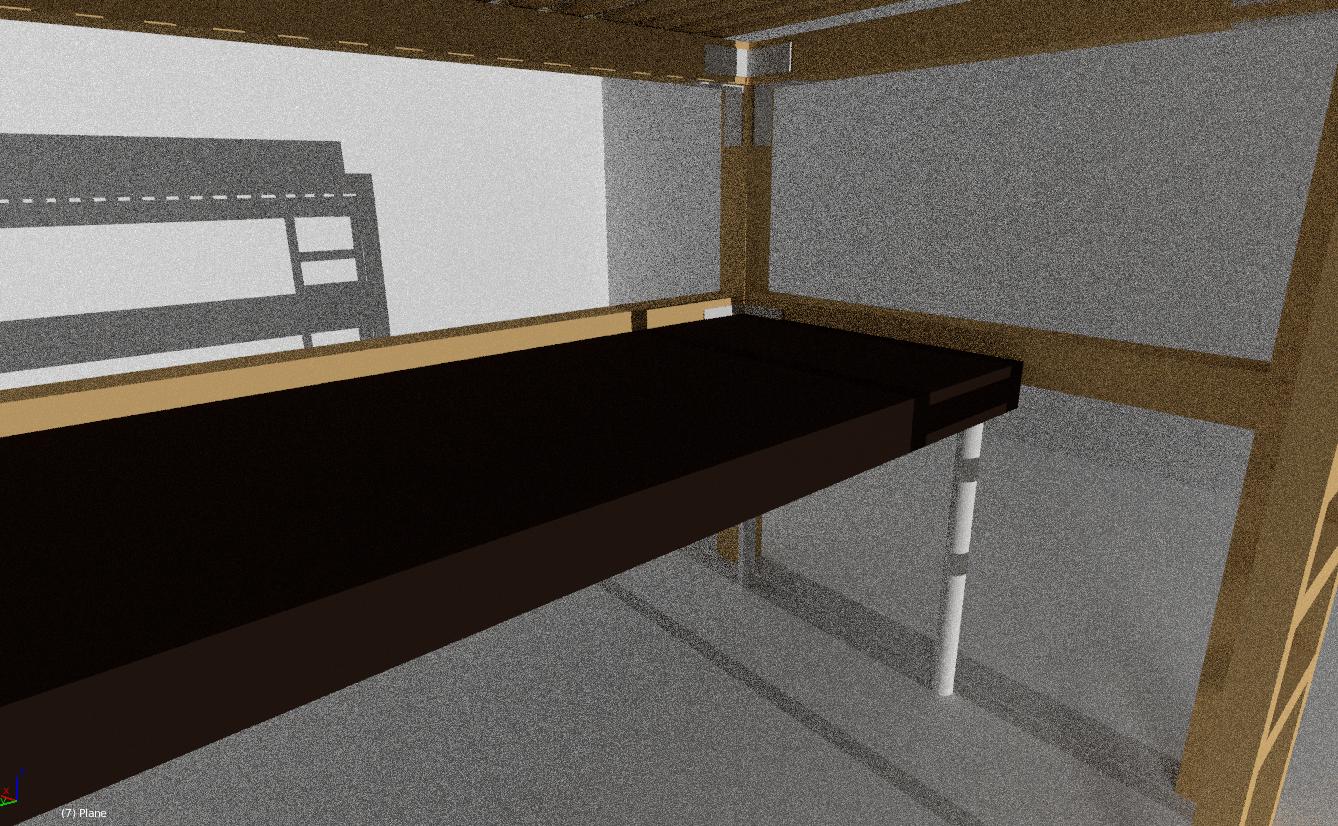 I made some tests and saw that the main wooden beams could support about 1000kg but the slates could only support about 50kg. With the help of the bed, the weigh should spread on the other slates but I still would like to have your opinions. 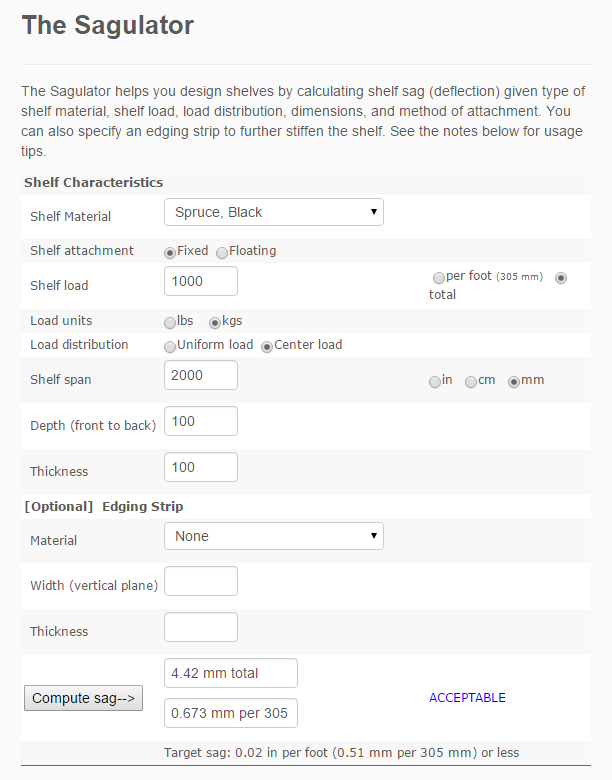 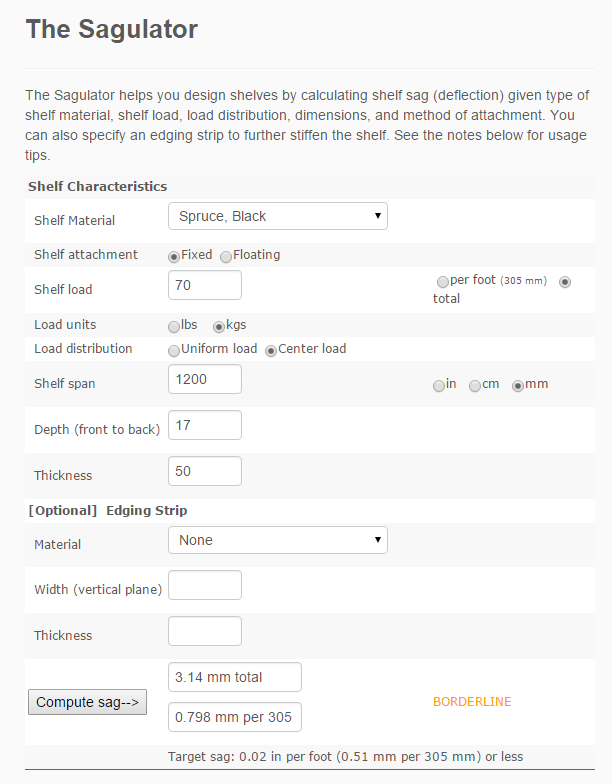 If I had a center horizontal beam, the slates would have ~60cm on each side of the central beam and the support capacity would be much higher but I'm not sure wether it's well attached to the rest of the structure or not. 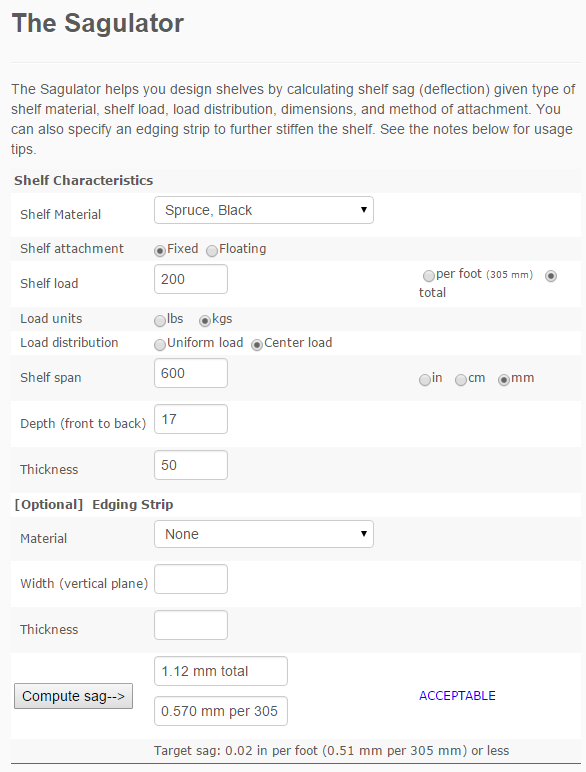 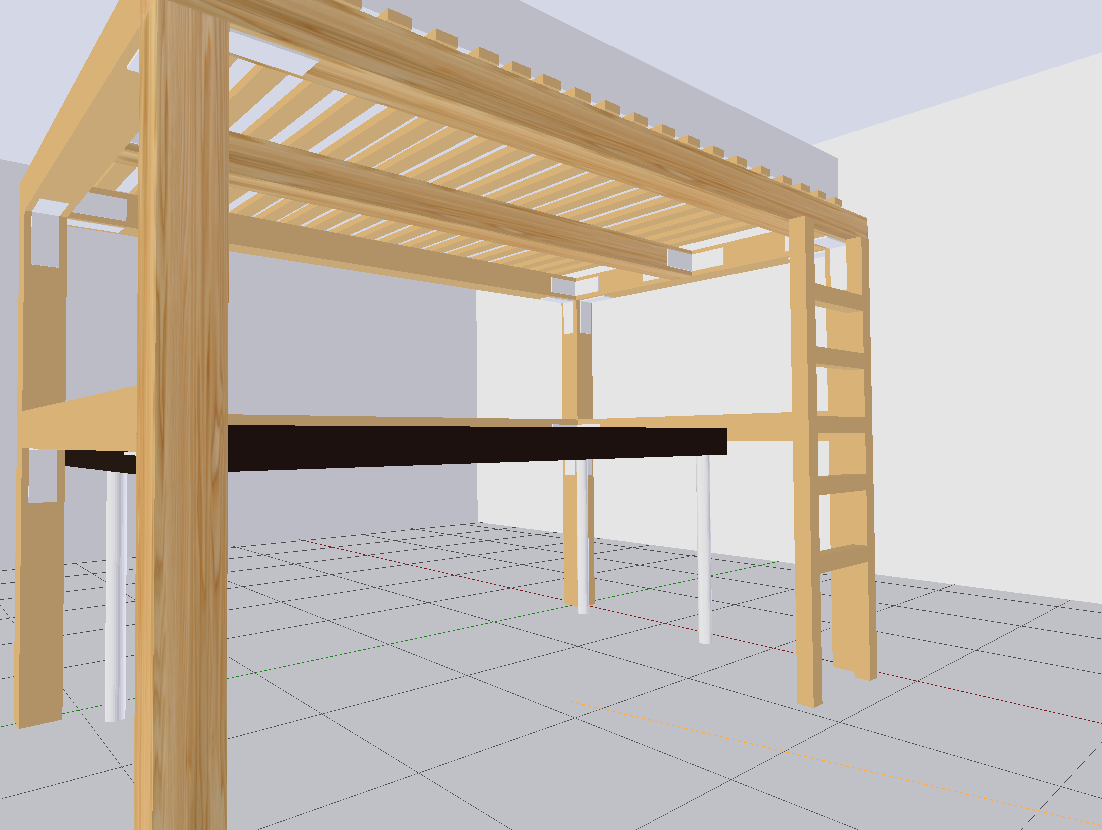 Did I use the sagulator tool right ?

Do you think I should put the center beam ?

Should it be attached better to the rest of the structure ?

Did I use the sagulator tool right ?

The folks who made Sagulator made the default condition for shelf attachment to be fixed. The connections that you have in your design would all be classified as floating. To be fixed they would need to be clamped tightly with no room to flex at the ends. Nailing would not be fixed, screws would not remain clamped tight for long. Screwed and glued - might work. The brackets definitely should be considered as floating connections. So, I would say that you did not use it correctly from the beginning.

Sagulator can not be relied upon if the loads are unreasonable high or low. In the case of the long beams, a 1000 kg concentrated load is a bit of an over estimate and would have an excessive deflection. If you used a more reasonable total load of 250 kg it would be fine.

For the slats, I think you switched the the depth and thickness (your diagram shows the depth being greater than the thickness.) Sagulator would show excessive deflection in both cases and even with much smaller loads.

Do you think I should put the center beam ?

Even though, Sagulator only shows deflection, and not strength, I would guess that the slats would actually break if you used them for the entire 1200 mm span. So, yes, you need the center beam.

Should it be attached better to the rest of the structure ?

That is a very good question and shows insight on your part. If you are attaching your brackets with carriage bolts - no problem. If you use screws, use the longest ones that you can.

Not the answer you're looking for? Browse other questions tagged technique joinery furniture wood strength or ask your own question.

11
Make a bunk bed
3
Weight bearing for a loftbed and wood only joints
5
Best way to attach metal legs to corner desk? Do I need extra support?
3
Is there a better way to join these two boards for a platform bed?
3
Wood movement with L-shaped mitred leaning shelf
1
What knock down hardware can I use on this platform bed frame?
4
How to enlarge a hole behind metal bracket?
3
Loft bed design
3
Shelves inside cupboard, how to attach to legs?
3
Reinforce bunk bed