I want to make a wall hanging knife holder that would be appropriate for two chef's knives. A very simply idea would be to use pegs. Just hang the knife on two pegs. A more elaborate idea I had would be to make sort of a form-fitting socket that the handle and guard of the knife would fit into snugly. The problem here would be that the carving would be difficult. A slotted holder is out of the cards because there is not enough headroom to lift the knife out. Also, the holder is around head level, so it needs to be pull out, not lift out. What would be an optimal, Japanese-quality solution here?

A typical chef's knife (blade is about 8 inches, haft is about 4.5 inches):

First real attempt at using sketchup as I would have a hell of a time explaining this otherwise. Magnets for this type of this are everywhere but like you said you have a ceramic knife. When I found out you were only thinking about 2 knives something like this came to mind. 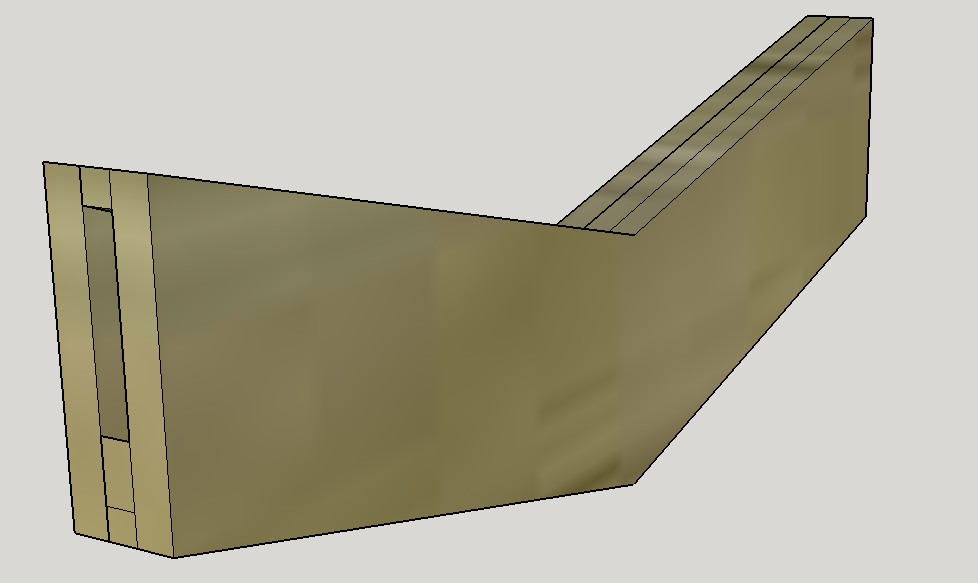 Blades would enter from each side. Would obviously have to have width a little greater than your longest blade. Small riser in each end will help keep the blade holstered by giving the handle something to rest on. That fulcrum could help the blade rest on top or the holster keeping the cutting edge from sitting. That would largely depend on how your knives are weighted. Also could have small recess on the bottom for air circulation.

You could take the same basic idea and instead of the blade sitting vertical you could have it laying flat while still angled down. Such a contraption would look odd I think and the one I have picture above would have a better center of gravity and is more flush to the wall.

I would have gone for a more curved model but straight lines are easier for me right now.

All that said you could take the basic idea and arrange them in an array for more knives.

I know you might think the peg is too simple but I thought I would include it anyway.

Again the weight center of the blade is important for that to work. Knife is free for access. If you want to hide the pegs you could still make a partial face the concealed the blade. Just need to leave the top open the help the blade get out.

Not the answer you're looking for? Browse other questions tagged design carving or ask your own question.

5
Design considerations for a machinist's work bench
7
Installing fancy distressed wall hanger knobs
5
Invisible wall mounts
1
Looking for help to design my own board game
0
Tabletop inlay design sources
2
What are the potential issues with this bench design?
0
How to whittle drumsticks with a swiss army knife?
1
Meat Grinder Table Design