How do I identify hand planes?

I bought 2 hand planes last week at flea markets, both of them together cost me less than $20 (from 2 different places). Both of course needed some TLC, one was pretty orange on the top, bottom sides, and everywhere in between.

One has No. 6 stamped on the end, though I had to clean the rust off to read it. The other one just says Craftsman and assumes you know what you got.

When I did a search for No. 6 hand plane I got a lot of images that of different planes. 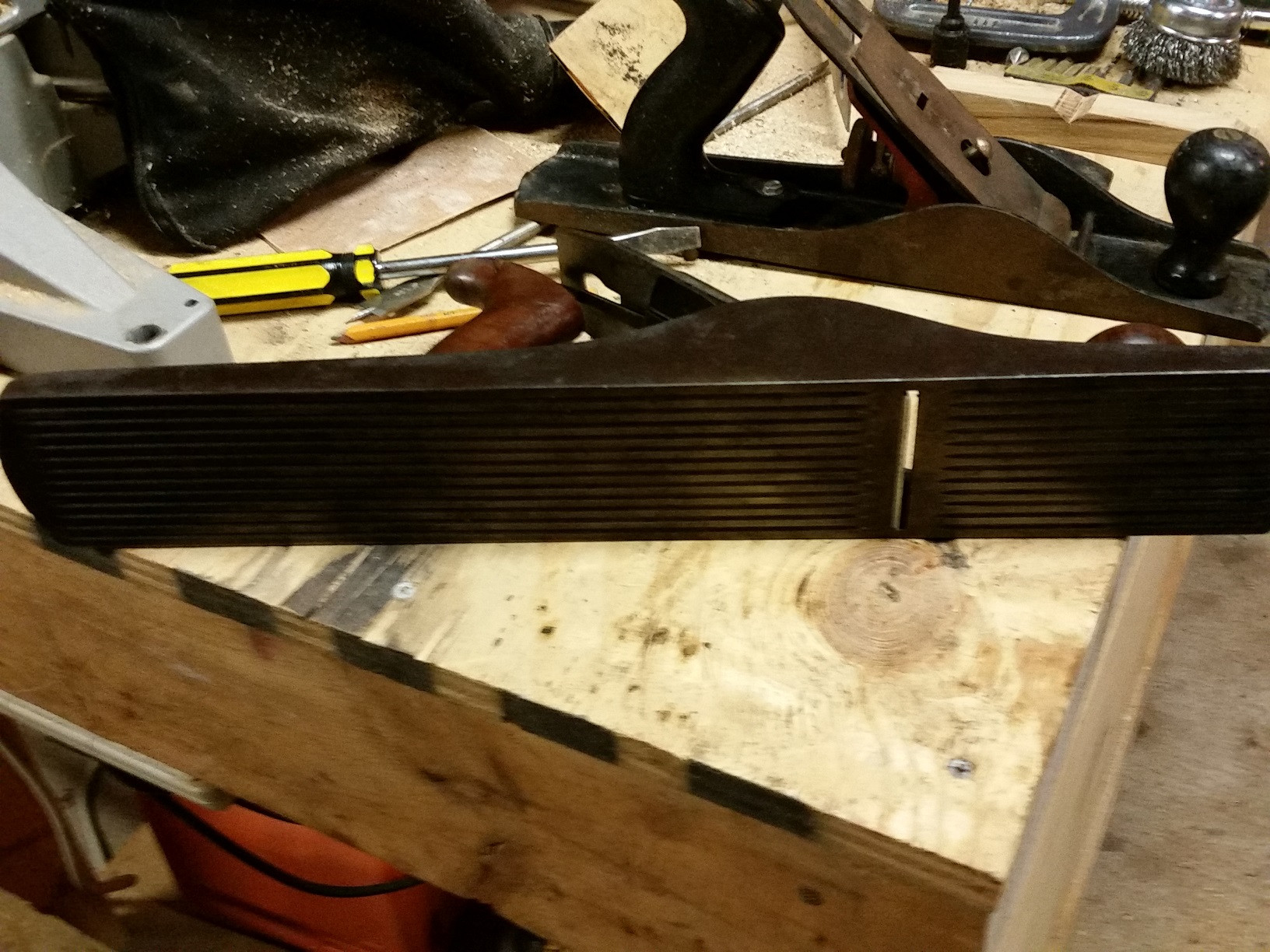 I'm afraid there isn't a good comprehensive site for all of these, so you'll have to do some research on your own for some of the lesser-known makers.

There could be a lot of bleed over between these categories but I think we could cover some good ground if we look at the different plane types (Although I have never heard this term they can also be called type studies). So that way if you see a plane you can get an idea of its purpose and know whether or not you need it in your collection. Again, this list is not meant to be extensive as there are many other types and some specialty types. The webpage Patrick's Blood and Gore covers them more then we ever could in this format.

These planes are smaller in size (Not to be confused with finger planes which are even smaller) and many can be worked with one hand. Usually easy to spot because of their size and the handle is also usually the cap iron/chipbreaker (at least for metal construction variety.) so you hand, while working the tool, would rest of over the iron. They specialize in end grain.

Hopefully it is safe to say that this would be one of the most common plane type you will run into. The "Jack of all trades" plane is what you would picture when you think of a plane. Metal ones should have a knob and a tote(handle) and the body would hide the plane iron inside ( as supposed to something like a rabbet plane.). Wooden one might not have a knob but would be about the same length. They are also shorter than a jointer plane but tend to be larger than the smoother. This is a general roughing plane. used before a jointer or a smoother depending on the project.

These are some of the easier ones to spot as they are the family of long planes given there nature of true up panel faces and edges. You can expect these to be near or exceeding 20 inches long. The plane in your picture surely is a corrugated jointer plane.

These can be seen as slightly smaller jack planes. As far as metal planes the anatomy of these and jacks are very similar. Smoothing can be also seen in how the blade is sharpened. In that the edges are slightly curved as to prevent making grooves in the work. The blade is sharpened, in such a way, does not solely mean that plane is a smoothing plane. The iron can also be placed at a much higher angle. It is designed to make very fine shavings.

This one is fairly simple. These are really tiny planes. Some of them are functional but there a number of novelty ones out there. Meant for really detailed work like on carvings.

Rebate planes and shoulder planes have the same basic design characteristic. The blade is the same width as the body. The body will have opening on both sides to allow the blade to extend the width of the tool. Rebate/Shoulder are not really tool synonyms while they perform the same function the shoulder plane has a more acute angle so that it can cut end grain better (Like that of a tenon shoulder).

Plane with a large, typically round, sole. Blade can be moved up and down in the mouth of the plane. Modern varieties have can be two knobs for handles. The large sole acts as a fence so the tool can move about in a recess.

Plane with an adjustable sole that can cut uniform convex and concave surfaces. Adjustable sole is the key identifying feature here which is just a thin plate.

These planes are easy to spot as well. There are a wide variety of planes that are called moulding planes. Most blades are not simple rectangular blades with flat edges. Used for making curves, hollows, beads and other more complication moudling cuts. Blades would have the same shape as the cutting edge of modern bits for a powered router. This is huge category.

This one works just like a card scraper except that there is a body and handle to hold the card/blade as supposed to free hand. Blade is installed in near vertical position.

Similar type of planes that can be used to cut tongue and groove (Older wooden varieties came in a matched pair) and rabbets. The blades were not that wide and the had fences to govern depth of cut and help run along a boards edge. The tongue blade would have a gap in the center and the matched blade sized for aforementioned gap.

If you were to spout the phrase "I like planes and plane accessories" you most definitely own a combination plane. Easy to spot, if the set is near complete, as you will find many additional parts depending on what you want to do with it at any given moment in time.

These planes can usually be identified by the multiple fences and fence attachments. More easily spotted if you see the interchangeable blades. The blades, depending on what is available given the planes manufacturer, would be able to do moulding, rabbeting, beading, ooges, grooves.... the list goes on.

These names are likely different / vary between regions. If another name comes up we should edit the post to cover the varieties.

My go-to source for Stanley hand plane information is Patrick Leach's Blood & Gore webpage. Don't let the name put you off - he has a plethora of information about all types of Stanley-made tools.

The planes were made during different years, and they are grouped into what are called type studies. The Hyper Kitten page is the one I normally use for identifying types, including a handy interactive flow chart. Based on the little I can see if your No. 6C, it looks like a pre-Type 12 since that looks to be a "low knob" in the front.

Otherwise, for Millers Falls hand planes, I usually start here for my research. For Sargent planes, here and here are good starting points.

You're looking down the rabbit hole here. There are a ton of other different old makers (Dunlap, Lakeside, Bailey, Shapleigh, etc.) and a quite a few newer makers too (Lee Valley, Lie-Nielsen, Groz, WoodRiver, etc.). I'm afraid there isn't a good comprehensive site for all of these, so you'll have to do some research on your own for some of the lesser-known makers.

I'm also a member of LumberJocks, and one of the threads there is dedicated to people who restore old tools. If all else fails, someone there can likely identify your tool if you give them enough information.

Those grooves are called "corrugations." The marketing idea was that they reduce friction between the sole and the workpiece, thereby making planing easier. In my experience, if there is any reduction in friction, I have yet to feel it. However, they do make flattening the sole much easier since there is less material to remove.

A lot of great info already. A couple of pictures to spice it up. In my experience the most common flea market, yard sale, antique store, etc. planes and what I happen to have are: 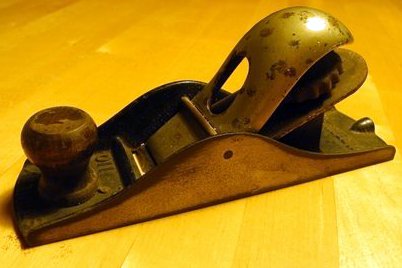 You see these guys everywhere. This is a Stanley No. 110 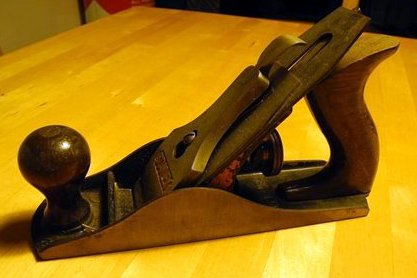 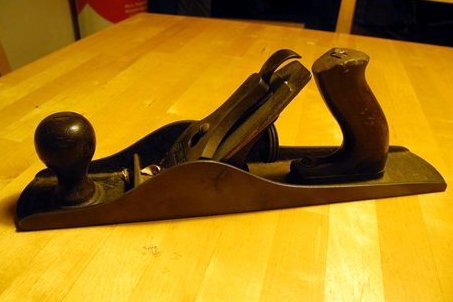 This is a Stanley No. 5 (the tote is a little broken) 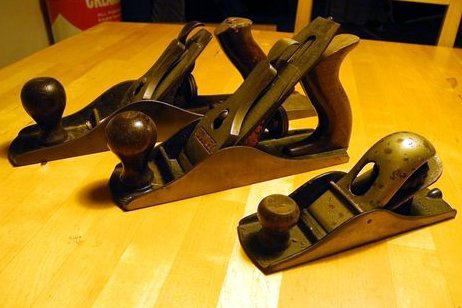 Not the answer you're looking for? Browse other questions tagged hand-tools tools plane tool-identification or ask your own question.

8
Why would a plane have a grooved sole?

22
How do you plane end grain?
8
Why would a plane have a grooved sole?
9
What should I look for when aquiring a plane second hand?
6
When is the ideal time to work green wood
6
Fettling a hand plane
7
How can I identify sharpening stones?
4
Different ways to set up a Number 4 bench plane
5
getting edge of plane square to sole for shooting
5
What kind of plane is this?
4
Eclipse style honing guide changing blade geometry & preventing tight mouth setting on planes