I am considering hiring a cabinet maker to construct a built-in workbench for machine work and would like to know the key design considerations and recommended jointing options for such a project.

The table would be mounted to a stone wall in the back and one side and have two legs. I envision using something like white oak 4x4s for the legs and having a 3" or 4" hard maple top. It has to be able to mount a large vise. I have seen Sjosberg benches but they are not really appropriate since they are designed for wood work, not machine work and blacksmithing.

What would be a recommended way of constructing the maple top and joining it to the legs?

In the photo below is traditional machine vise bench: 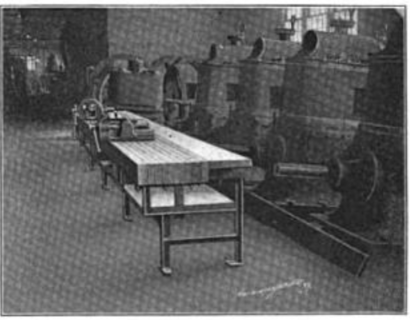 Like many such benches it has cast iron supports, not an option for me. Also, notice top is made from 2x4s sistered together, which seems logical to me. Do you bolt them together?

Unfortunately there isn't any easy answer to this.

As with many woodworkers when I was designing my own workbench I immersed myself in the topic and spent months collecting images, step-by-step build articles, reading and analysing (over-analysing) books and online sources for any and all suggestions about what materials to use, what joints to favour etc. And the inescapable conclusion from doing this is that there simply isn't any one particularly good design for any aspect of a workbench.

People can't even agree on the minimum thickness for the worktop, there certainly isn't any agreement on what joints should be used (any reasonable joint is strong enough, and many can be further reinforced if needed/desired).

As long as the chief requirements are met — stability and strength — then everything else is up for grabs.

Machinists' benches don't have all the same requirements as a woodworking bench of course but you do see the same individuality in them too. The materials, worktop thickness, key design aspects (including shape and worktop height) all vary enormously from one to another.

So the take-home message is this: strong enough and stable enough.

And price of materials doesn't ensure this, by which you can read that it doesn't need to be made from hardwoods. Even if a bench at some point has to be able to support something like an engine or a rear-axle assembly it could be made from inexpensive 2x construction wood throughout, as many real-world examples show.

I envision using something like white oak 4x4s for the legs and having a 3" or 4" hard maple top.

Unless you're set on the materials from an aesthetic point of view I would suggest you re-think a thick maple worktop. It undeniably makes for a strong, attractive slab, and it will be extremely tough and durable, but as amazing as this might seem to a non-woodworker (some woodworkers too!) a solid-wood worktop is less stable than a much cheaper top made from one or more manmade boards, including if made from the cheapest and most maligned of the lot, OSB or oriented-strand board. Another very un-admired material is particleboard (UK: chipboard) which in sufficient thickness is immensely strong — this is the core material of most laminate kitchen countertops.

The difference in price between a hard maple worktop of 3-4" thickness and one made from some combination of MDF, plywood or particleboard would be considerable, possibly approaching a factor of ten. And the top made from the manmade boards will be more stable as mentioned, and likely at least as strong so actually represents far better value.

If you have your heart set on seeing maple (or another hardwood) on the top you wouldn't have to give it up entirely while still taking advantage of manufactured boards for the bulk of the construction. Hardwood edging strips are usually used on the edges anyway for better durability, and in addition to those a 'skin' of thinner hardwood boards for the top will give the appearance of a benchtop made from hardwood but at a fraction of the price. A particularly good and inexpensive way of skinning the top has been used by a few people on their workbenches: laying a layer of laminate flooring on the surface.

A worktop laminated up from board materials will save money in another way, as in addition to the savings in materials costs the build time will be significantly shorter because it's far easier to construct. Instead of a lengthy and sometimes tricky flattening and smoothing operation at the end of the glue-up of a solid-wood top, a laminated top can be essentially ready to go as soon as the last glue joint has dried.

Also, notice top is made from 2x4s sistered together, which seems logical to me. Do you bolt them together?

Yes you can if desired. This is sometimes used as the sole joining method, here's an example for a heavy-duty workbench 200 pounds of "ain't goin' nowhere" as its maker says: 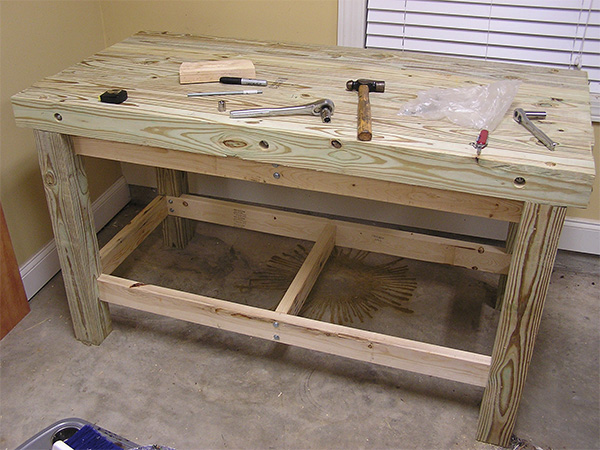 Other times the threaded rod is used as a reinforcing/stabilising measure, with the boards glued together as normal. To be frank though, this is not needed if the boards are glued together properly (glue joints are at least as strong as the wood itself) but it is sometimes seen as a necessary precaution if the top will see regular exposure to moisture.

Possible leg joints
At the crudest end of the spectrum you could literally nail the entire thing together! It would be plenty sturdy if done right. I'm sure you would prefer not to go this way and for various reasons I wouldn't recommend it anyway.

As touched on above there are innumerable options for true joinery (multiple joint types and multiple variations of each one) and as such it's difficult to recommend just one. What I'll suggest instead is a simple-to-do, very strong, but most importantly reversible construction method that I think is ideally suited to the home workbench: bolt it together. And with very heavy use there's no risk of glue joints creeping or fracturing if you don't have any!

Here's an illustration of how it can be done: 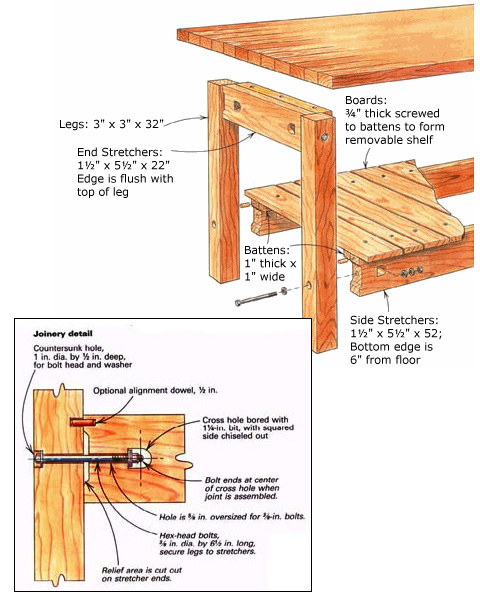 And a couple of options on the joints: 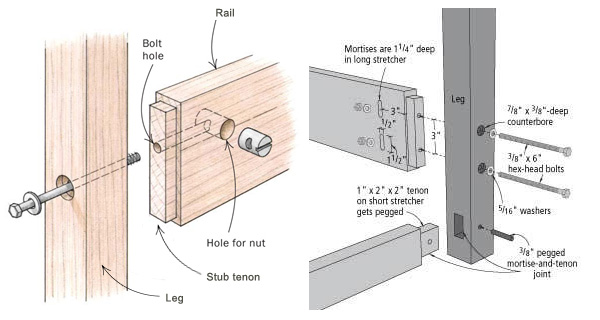 Joining worktop to leg assemblies
This as you'd probably guess by now can be done in many ways. I'm a fan of the simplest, strongest option for this sort of thing so I would suggest using some of these: 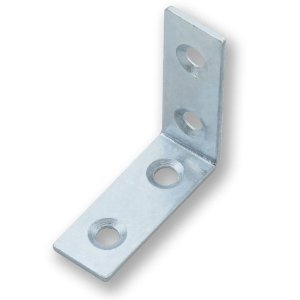 Yes they're crude, but very effective and quick to install. Plus of course it keeps with my theme of keeping the construction simple yet strong, and capable of being knocked down at any point in the future in case you need to move or alter the bench.

Not the answer you're looking for? Browse other questions tagged design workbench or ask your own question.

8
Are there specific types of screws I should use for woodworking?
2
Best way to join frame members in a rectangle box using bolts?

7
Mounting the top for a new workbench
2
Are some workbench features not suitable for a softwood workbench?
2
Vise chop thickness?
2
Help me fix mistake -- twin screw vise spacing runs screws into table legs
4
Need help understanding workbench design and build process
4
Need Advice on Building Workbench
1
Can breadboard ends hold together a tabletop without glue?
3
Strength of oak versus maple
3
Design: Creating a table with removable center/top
1
How to face joint board longer than bench by hand