How to setup joint proportions?

I am a brand new woodworker and I would like to know how to setup joint proportions correctly.

I've watched many videos on various joint techniques, but most won't teach you about the proper measurements required. The only consistent advice I find is keep dovetail length about equal to board thickness. And keep dovetail ratios between 1:6 and 1:8.

Disclaimer 1: This is my first time setting up a joint of any kind, so please take it easy on me :)

Disclaimer 2: This is not about the half lap dovetail in specific. I am curious to know about the joint setup/layout process involved in approaching any joint.

For this hardwood joint, I've chosen 1:8.

Here's the process I used: 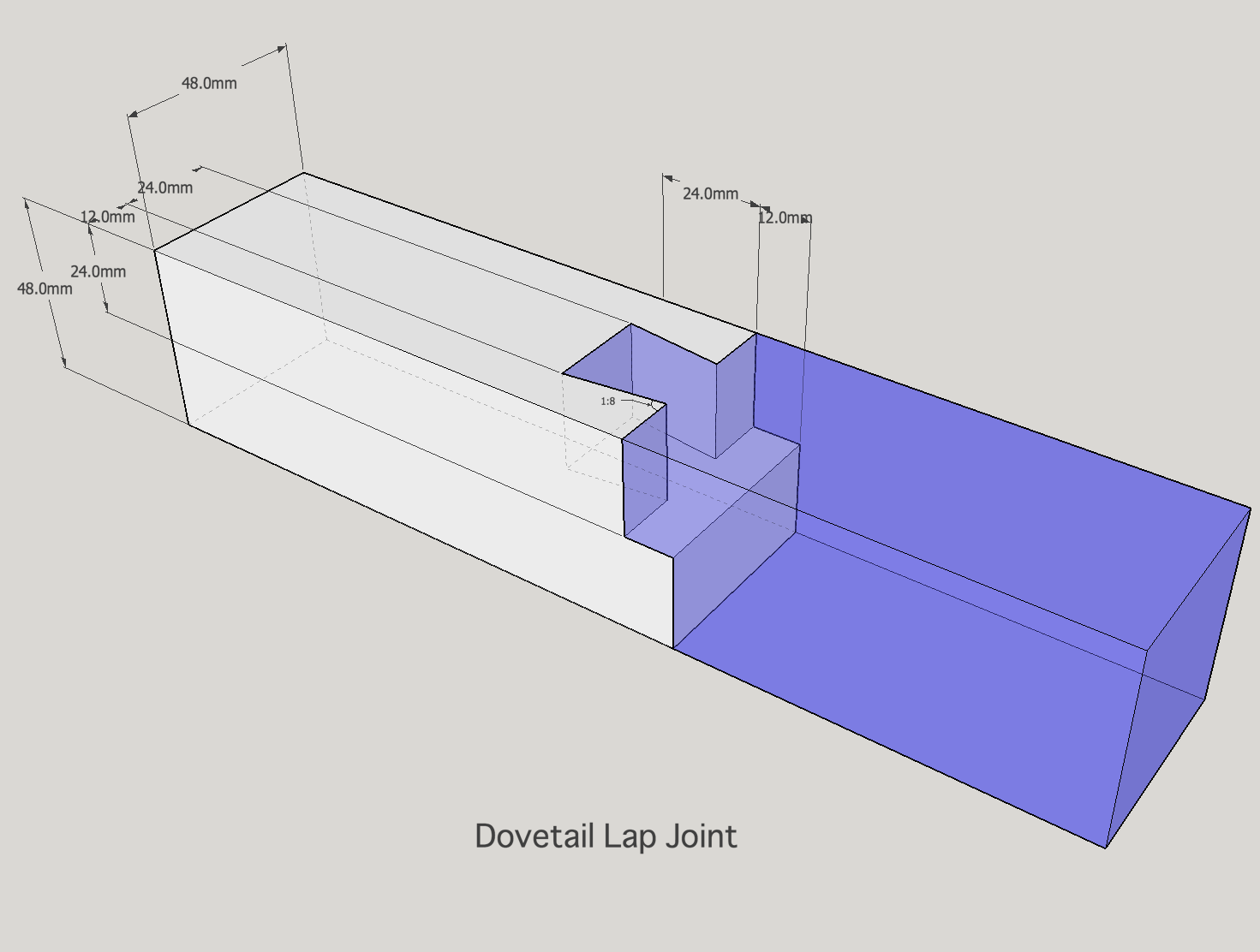 The joint above looks like a half lap dovetail joint, but how well would it function like one ?

Is there any basic science/math to picking dimensions for the joints ?

What techniques do you use to layout a joint from scratch ?

The only consistent advice I find is keep dovetail length about equal to board thickness. And keep dovetail ratios between 1:6 and 1:8.

It's worth mentioning that some of this is a tradition thing and to some extent that is based on aesthetics; you do see exceptions for specific decorative effect.

Dovetails are inherently strong, both structurally and because of the large glue surface area, so you can get away with a fair amount of variation and still end up with a very strong joint. Broadly speaking, the main things to keep in mind are not to make the pins or the base of the tails too thin, and not to make the slope too excessive (because this would tend to leave short grain at their corners which is weak).

And going on from this, to some degree many joint dimensions are a matter of choice — excluding very fat or very skinny options almost anything in between will work acceptably well.

I wiggled things around until they looked like most stuff I've seen elsewhere.

The joint above looks like a half lap dovetail joint, but how well would it function like one ?

It's slightly more complex to lay out and cut than a conventional dovetailed half-lap (with I think little or no added benefit for most applications) but if you're happy with how it looks I don't foresee a problem.

Is there any basic science/math to picking dimensions for the joints ?

There are some, but it mostly pertains to structural wood joints where strength is more critical, and the maths is very heavy going as it takes into account the structural strength of the wood, e.g. moduli of elasticity and rigidity. If you'd like to read up on this publications from the Forest Products Laboratory (a division of the US Department of Agriculture) are a good place to start. If you'd like to look into it in even greater detail there are ASTM standards for structural joint strength and testing of wood.

What techniques do you use to layout a joint from scratch ?

Rough rules of thumb are the usual starting point for laying out joints, and some people have their own preferences for how to lay out joints (some based purely on expedience and not with an eye to maximising strength).

In a furniture-making context, because wood is generally more than strong enough for the application much variation in joint dimensions is not critical and doesn't have any noticeable impact on strength.

For mortise-and-tenon joinery for example, older guides may say that tenons are generally 1/3 the thickness of the wood being used. With thinner stock tenons half the thickness are not uncommon however, and with thicker boards tenons under one third can be used; or alternatively, and to be preferred, a pair of thinner tenons are formed (twin tenons). Mortises are generally just a little deeper than the length of the tenon they're intended to mate with, as it's difficult to form the bottom of a mortise perfectly flat it gives you a little leeway so the tenon can seat fully, as well as providing a small pocket for excess glue to collect in (rather than all of it trying to squeeze out when the tenon is pushed home).

Because joinery is such a wide and deep subject it would be best to ask joint-specific questions as and when they crop up.

Not the answer you're looking for? Browse other questions tagged joinery design or ask your own question.

17
What am I doing wrong when making lap joints with my stacked dado set?
8
Corner butt joint, longer top or longer sides?
12
Mortise and tenon joint proportions for 3 wooden beams corner
11
Quick corner joints in practice
2
Troubleshooting Compound Miters
5
Do I need to worry about expansion and shrinkage for my table top with wood joined at 45 degree angles?
4
Hanger bolts on chair legs keep coming loose
1
What knock down hardware can I use on this platform bed frame?
8
How do you pick a joint?
1
How likely is it that my kids will break this bench?