Stabilizer for softwood tabletop that bows

I am building a cheap dining table out of cedar 2x4's. This is obviously not my first choice for wood but money was my limiting factor. I have planed them down to size and biscuit joined them together for the table top. The glue has been dried for about a week now and I'm noticing that the sides of the table are bowing downward about 1/4" on each side. Is there a good way that I can stabilize the table top from underneath to fix/prevent the bowing?

For your reference, this is the design I created and am using for this project. 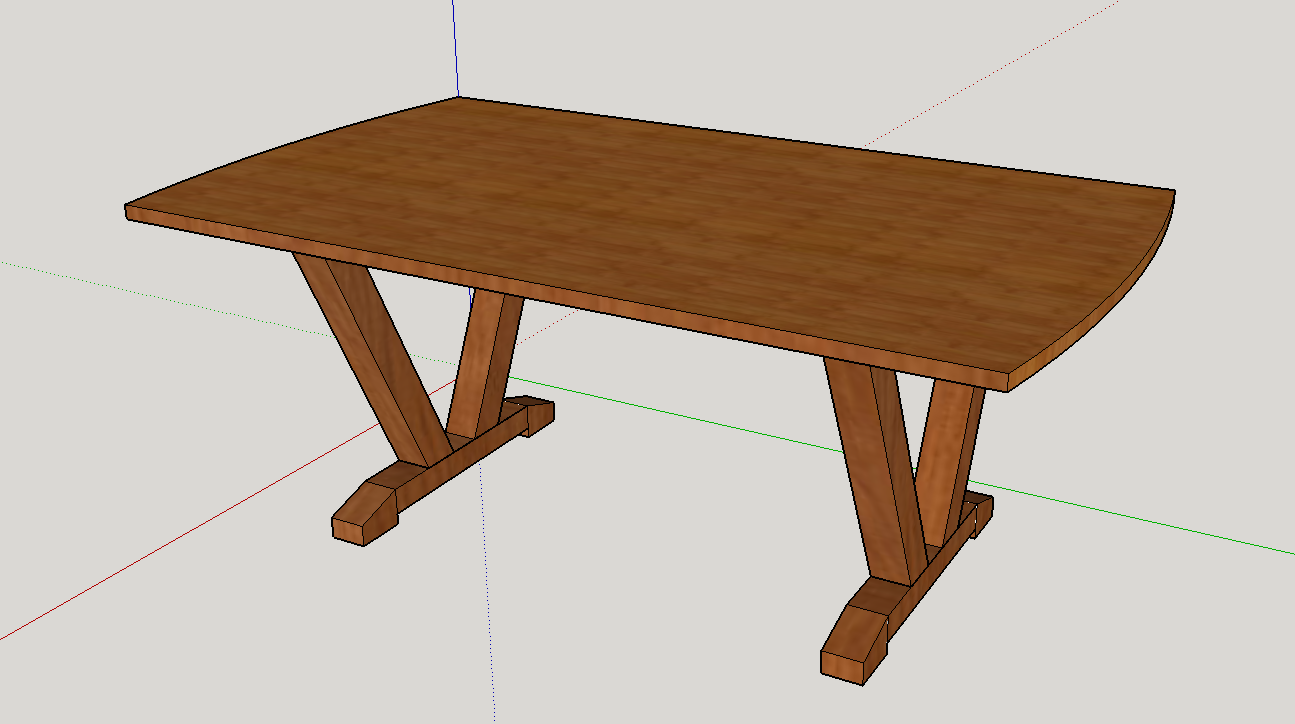 The ideal 'fix' for this is probably to saw the table apart (yes I know, *gulp*) and flip a few of the boards over,

But going with what you have, two very traditional methods that were used to help keep tabletops flat were screwing the top to battens on the underside and breadboard ends. As a solution to your current obviously the first is more easily adopted of course so that's what I'll describe.

Your design may already incorporate boards that run across the shorter dimension of the table that the legs attach to, in which case those can probably be used for this. Although you may wish to attach additional battens given that bowing has already occurred.

It's not as simple as just driving screws through boards that run across the width of a tabletop. You need to account for what's generally described by the catch-all phrase seasonal wood movement (sometimes shortened just to the even-less-useful wood movement). This specifically refers to expansion and contraction of wood across the grain which on a wide tabletop can amount to a fairly significant dimensional change, e.g. 10-12mm or just under 1/2". Note that expansion along the grain is so small it can safely be ignored. For a little more detail on movement please see more in this previous Question, What general considerations do I need to take into account for wood movement?.

So in this case you would enlarge the screw holes on each end of the battens, or in your existing front-to-back boards if there are any, so that the screws in those positions can move back and forth as needed during dimensional changes during the year. 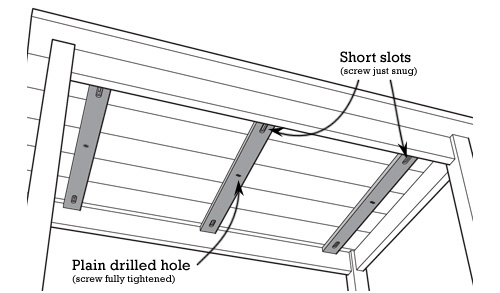 Note that this illustration assumes one screw on each end, there's no reason you can't use two for each batten as long as each one rides in a slot.

Typically there will either be cross pieces underneath, or "breadboard ends", to keep a tabletop flat. Either way you have to allow for wood movement as the table expands and shrinks across the grain, which means the crosspiece gets attached in such a way that the top can slide relative to it, eg by screws going thru slotted holes. You'll notice that most picnic tables solve this by using individual boards rather than gluing up a solid table top, affixing each to the crosspieces with a single screw, and leaving space between them for expansion when wet/humid.

There are things that can be done to reduce the tendency of a solid tabletop to bow, by letting the wood acclimate to the environment you intend to use it in before you start construction (which won't help you much for an outdoor table), managing grain direction so warp tends to average out, and just accepting that no matter how flat the pieces were you're going to have to flatten it again after glue-up. But the breadboard ends or equivalent are what keep it flat.

Not the answer you're looking for? Browse other questions tagged technique bowing tabletop or ask your own question.

17
What general considerations do I need to take into account for wood movement?
8
Do pocket hole screws allow for proper expansion and contraction in planked table tops?
6
How can I fix warping on board made of glued 2x4s
5
Is this a case of just using the wrong wood? (Warping)
7
Is this cedar planter box design asking for problems w/ wood movement?
4
Can I use half-lap joint for table breadboard?
2
Planing to correct cupping in panel (desk top)
1
Non-permanent side-by-side assembly of boards
1
Why did desk boards split apart?

6
How to make a louver vent in a board?
6
Cutting tight miter joints for a frame around an existing object
5
How can I create a planked wood table top with a plywood core?
12
Quick corner joints in practice
4
Caster/slide for tabletop tray
1
Mounting method for tabletop
3
Designing legs for large larch tabletop
3
Why does my teak dining table have splits?
0
Cut down a veneered table top