Questions about my custom stain and cleanup

As some know I was experimenting with making my own stain using vinegar and nails removed pallets. I used white vinegar and a couple hundred nails in a 5 gallon pail.

In the end I have a stain that is working but the results are not what I expected so I was wondering if someone might be able to determine where I went wrong. In hindsight I can think of a few specific things that changed the outcome. Outside of the general process of putting nails in vinegar I did the following things:

I know from an answer to another related question

In reality you just need iron and vinegar. Rusty metal is no more or less desirable here

so it is possible I put myself in this position by using too much rust.

At the end of the day I wanted to know how can I clean this pile of nails? In theory most of the rust should be gone and I just need to clean them and I could use them again.

Do you think the "rust foam" was unavoidable? How could I have removed the liquid from the foam?

Below is a picture after I poured almost all the liquid out. 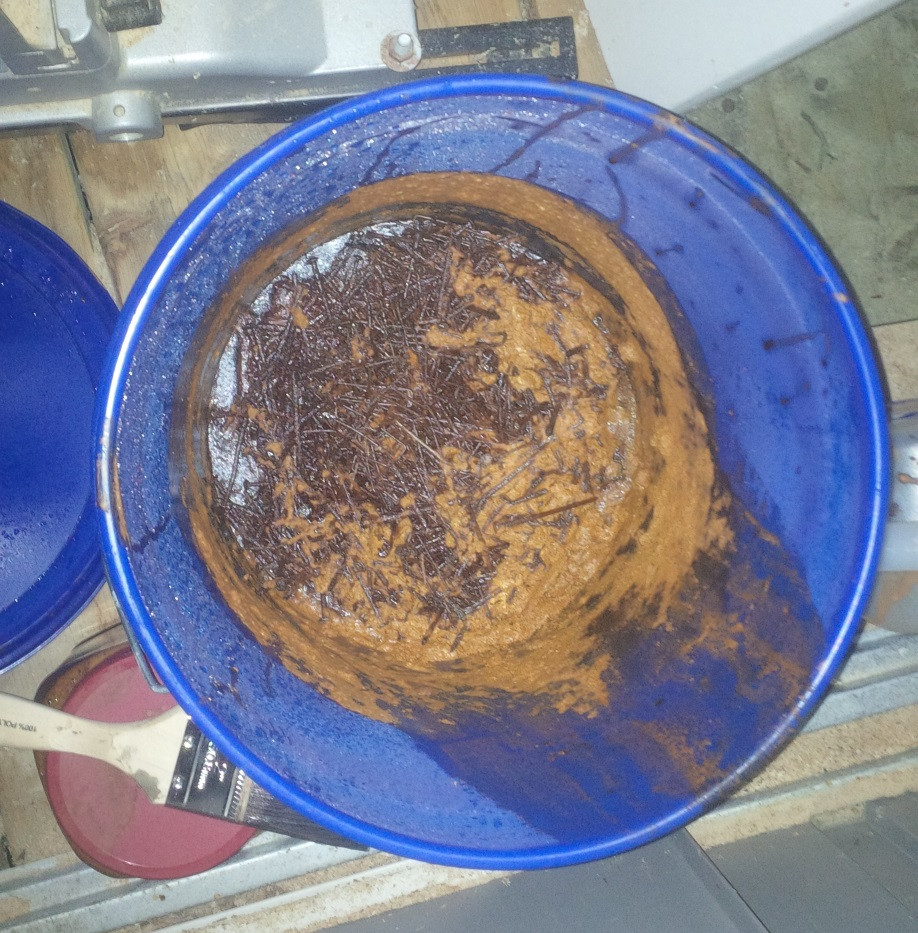 Concoction was left in the pail for about 3 weeks. Life got in the way. Most the tutorials about this sort of thing suggest a week at most.

Not a problem. The goal is ideally to convert all of the acetic acid to iron acetate, so giving it longer is advisable, not a bad thing in any way. As I've alluded to previously, most guides to this sort of thing are woefully light on important details!

First time I tested out making some iron acetate solution I used a small wad of steel wool in a small jar of vinegar and I left it soaking for so long it dissolved entirely.

Tricky to spoon off because of your setup, which I'd have done as a first step (similar to skimming foam off the top of simmering stock or when boiling down jam).

I think filtering through a coffee filter will take care of most/all of it. I've had this myself and I do remember that the liquid does eventually go clear (to be specific, not cloudy) on its own, I think the fine rust particles just settle out of the solution and form a layer on the bottom of the jar.

I might have used too many nails but I didn't think it would hurt.

Nope, again the goal is to maximise your production of iron acetate. If you provide an excess of iron it helps to ensure this.

At the end of the day I wanted to know how can I clean this pile of nails? In theory most of the rust should be gone and I just need to clean them and I could use them again.

After you remove them from the vinegar they will re-rust precipitously — once exposed to air they can start to turn a sort of dark straw colour literally in front of your eyes, a process called flash-rusting.

So first thing to do is simply to rinse them off with plenty of clean water. Some people like to neutralise the reaction with an alkaline solution (e.g. baking soda or washing soda dissolved in warm water) and if you want to err on the side of caution do this, then rinse one last time.

Then you need to dry them out quickly and get a bit of oil or wax on them to stave off future rusting.

I'm not sure how I'd approach drying them, you could simply dry them off roughly and then lay them out in a single layer and give them a blast of WD-40, it will drive water from the surface of the metal (the WD in the name stands for Water Displacement). It's hard to tell how many nails you're dealing with there so this could require quite a bit of WD-40.

If you'd prefer not to use the above method what I think I would do is dry them fairly thoroughly with one or more towels, then put them in a shallow tray in a warm oven to fully dry out. They may rust a bit before they've had a chance to completely dry but it's just light surface rust and not a big deal; typically you won't even see it once you oil them.

To oil the nails efficiently, the pail you used to soak the nails in looks like it has a lid, if so once it has been cleaned and dried throw the dry nails back in there with a spoonful of oil, then just rolling it back and forth for some minutes should be enough to evenly coat them all in a light film of oil.

Any oil will do, including a vegetable oil (it will go rancid eventually but this is not a problem, it just smells a bit) but use mineral oil or baby oil if you want to avoid this.

Not the answer you're looking for? Browse other questions tagged staining nails clean-up or ask your own question.

5
Choosing a vinegar when making my own oxidizing stain

5
Choosing a vinegar when making my own oxidizing stain
5
How to fix water damage to wooden table
1
Is this resin & nail hole a Bad Thing for a chopping board?
4
Lacquer brush marks, and dullness, on wood surface - what to do?
3
Can all whetstones be cleaned?
4
Question about yellow stain around wood plugs
0
Worried about pre-stain conditioner results
0
Turning indoor stain furniture into outdoor stain using sealer / oil or sanding and restaining
1
How to correct water based stain dried streaky
0
Black “dots” on wooden stair treads, can't sand them away