What are some efficient and effective ways to remove rust on old hand saws?

I have quite a few hand saws that I have bought from antique stores, garage sales, and ebay. They all have some amount of rust, ranging from occasional spot rust to full-on rust on the entire saw plate.

My usual rust removal routine is to use a wire wheel 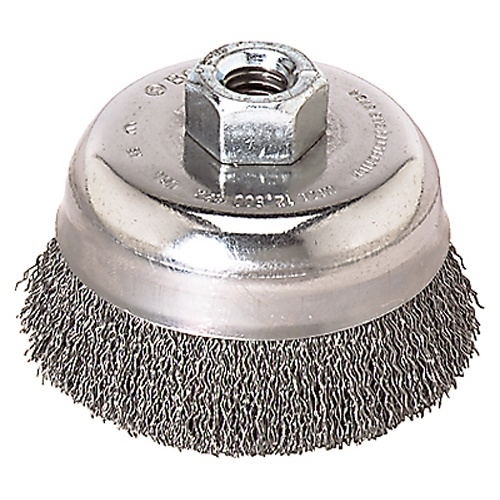 to remove as much surface rust as I can, followed up by sandpaper to get rid of scratches.

As an added wrinkle, hand saws often have etches in the plate that may be destroyed by some means of rust removal (i.e., heavy sanding and other abrasive means). The image below (source: The Disstonian Institute) illustrates such an etch. 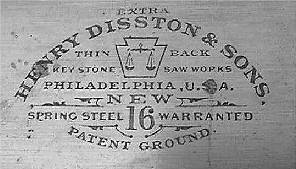 What other effective and efficient means are there to remove rust from a hand saw?

Many people use a little of two of these, for example by abrading most of the rust away and then using certain polishes which have some chemical action in addition to the fine abrasive particles that physically polish the metal.

An additional point, it's worth degreasing (washing or solvent degreasing) any metalwork prior to getting at the rust, regardless of the method used, but it's particularly vital when using chemical or electrical means as without it you can get much slower or patchy results. It can be surprising just how much surface rust is removed by giving it a good scrub!

Fairly obviously this includes using wire wheels, abrasive paper/cloth/film/mesh or powders and steel wool, but this category also include physically scraping off bulk rust, e.g. with a hard steel or carbide scraper. This last is of particular application to saw blades since the large uninterrupted flat surfaces makes for an ideal canvas for scraping to quickly and relatively easily get the bulk of the rust off, prior to using a finer technique to remove the last of it.

There's no denying the effectiveness of abrasive methods since you can sometimes see the rust come off before your eyes, so the technique is high on the list of many users because of the quick payoff and satisfaction. But they also come with some risks. The most obvious risk is to the tool itself and that is scratching of the metal — at even moderate speeds a brass brush can mark softer steel, so great care should be exercised when using a steel-wire wheel at any speeds. You may inadvertently introduce texture that is difficult or impossible to erase; regardless if it can be removed not scratching it in the first place is obviously desirable.

An under-publicised risk to wire-wheel work is that of the tool being snatched by the rapidly spinning wheel. The danger of this, not just to the tool but to the operator, should not be underestimated. If you must use it read up on the technique and practice at lower speeds!

And always wear eye protection when using a wire wheel to remove rust, no exceptions.

To begin with there are the commercial rust removers (most based on phosphoric acid) — including the Internet favourites Evaporust, Naval Jelly and Ospho — and while these can be very effective, and some very fast, the cost of using them rises steeply in the long term.

The more budget-minded tend to favour one or more home solutions, including muriatic acid (hydrochloric acid), battery acid (sulphuric acid), phosphoric acid, oxalic acid, citric acid, vinegar and my own personal favourite when I'm not in a rush, a solution of molasses in water.

This last sounds bizarre if you've never heard of it before but it does work and very well, although it is relatively to very slow. It can take a couple of days for light rust to a few weeks for heavier rust encrustations. However it is extremely safe; people have literally forgotten about parts soaking in molasses solutions for months and the metal has come to no apparent harm.

The strong acids, hydrochloric and sulphuric come with some dangers (not just of personal injury) so they should be used with great care and careful reading up on their use should be done prior to attempting any work with them. Also note, many metalworking sources state that hydrochloric acid can lead to what is called hydrogen embrittlement, which can fatally weaken the steel. How bad this is in practice or how pronounced the effect can be is the subject of heated debate, however I think it's best to avoid its use entirely for this purpose as there are other methods which are just as effective, just a little slower. And nobody should be in that much of a rush to get the rust off an old tool!

This a great method, quick, inexpensive (in the long term) and fairly simple to do, and the results can be everything you'd wish for as far as rust removal goes, leaving at best pristine steel.

The proponents of electrolysis confidently state that it is the cheapest, safest and quickest rust-removal method going. They're slightly overstating things on all counts. It can be very safe, but steels vary and bottom line, varied results are regularly seen. Sometimes it's merely a cosmetic difference but other times some etching or pitting occurs. And unfortunately it's impossible to preview the effect, you have to use the technique to see the results.

An important point in relation to saws, electrolysis can nearly erase the etch because it indiscriminately cleans the steel (the etch is still there, just the black is removed). So additional steps may be needed to restore the etch to visibility if this is desired.

Note: if using electrolysis don't bother with lye/caustic soda (sodium hydroxide) as some guides call for; the process works perfectly well with washing soda (sodium carbonate) which is far safer to handle.

Vinegar-and-salt rust removal has been recommended for tools as slow but very safe and very effective. I'd remove wooden handles first, of course.

I've been meaning to clean up a bunch of old handsaws myself, along with a few other abused tools.

I'm not a chemist, but my understanding is that the acetic acid reacts with iron oxide to form iron (III) acetate, which is water-soluble.

I'm not sure about the salt's function either, to be honest. Some folks claim the chloride ion might cause pitting in some metals and advise avoiding it; vinegar alone seems to do a fine job on everything but the worst-damaged surfaces (which I expect I'd need to attack abrasively).

It has also been suggested that adding a bit of dish detergent as a "wetting agent" might help de-rust fasteners and other small corners. It would certainly help cut through any remaining oil on the metal. (You should degrease the tool first, but...)

Caveat: It is reported that this treatment will remove "blueing" from steel. I don't know whether it will attack pot metal, as molasses is reported to. It didn't seem to do any damage to brass.

Remember, since this is an acid bath, however mild, you should give the tools a brief baking-soda bath afterward to neutralize any residue. Then, of course, dry thoroughly and immediately oil so they don't rust again.

Lots of web-discussion about this, if you want to dig deeper.

Late addition: The best container I have found so far for soaking handsaw blades is a plastic window-box planter. It's long enough to hold the blades, but not wide enough to lay them down. On the other hand, I can fill it almost deep enough to completely cover them with two quarts of vinegar, and if I toss in a few other tools that need cleanup that raises the level enough to do the job. A gallon of vinegar has so far de-rusted three saw blades and two abused planes.

I tried adding a very small amount of salt in my second attempt (reusing the same vinegar, which still seems to have been effective). I'm not sure whether it made a difference or not.

(The handle of the wire-brush I was using to mechanically loosen some of the rust is now somewhat ebonized, from the iron acetate acting as a stain.)

I haven't yet tried the molasses approach; may give that a spin for the next tool. The fact that we don't have a clear explanation for how it works bothers me...

Not the answer you're looking for? Browse other questions tagged technique hand-saw rust or ask your own question.

2
How should I go about restoring rusty clamps?
10
What should I do to maintain a saw blade?

7
What are the techniques to seal or remove sap?
6
What are the different styles of Japanese Saws
4
How effective are different types of saw blades for various cuts and woods?
3
What are some tricks to flatten twisted and warped lumber boards without removing any material from them?
2
What are some good ways to finish smoothing a wood carving after you have the general form roughed out?