Cutting a wooden box into 2 pieces, with special shape

I want to cut a wooden box (3 X 3 X 3 INCH) the same as the attached image. Every CNC shop told me that they cannot do that. I tried to do it with regular saw, but it wasn't good as you can see.

Does someone have an idea how to do it? 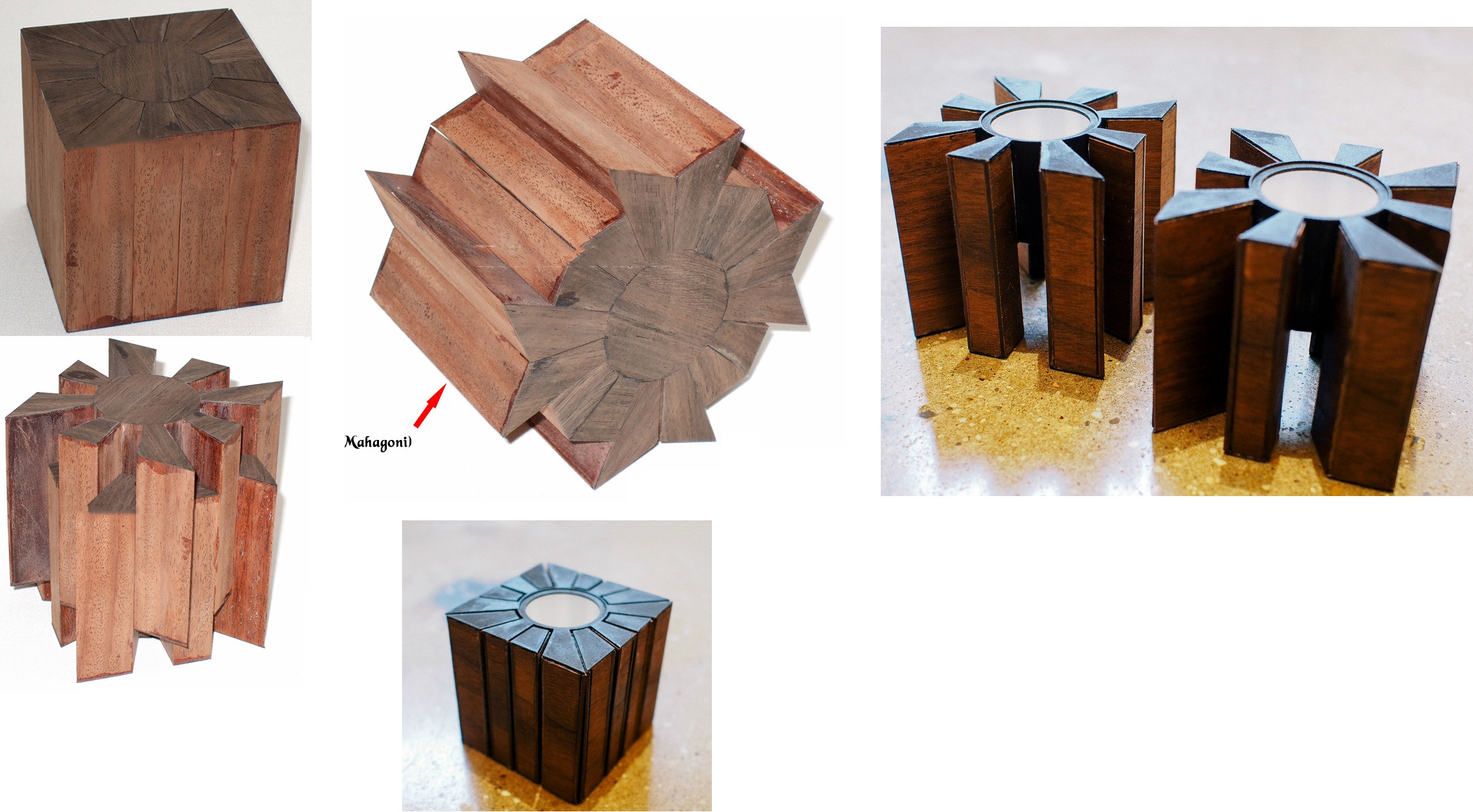 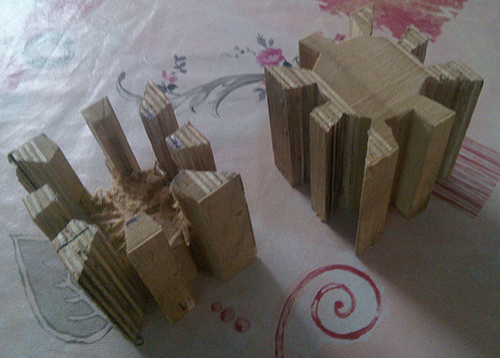 I don't think it necessary but there are several links in this answer that are directly related to the horror movie Hellraiser. If you have issues with that type of content don't click on the links.

So it looks like what you are trying to make is a variation of the Movable Star Lament Configuration. I cannot seem to find any plans to reference or anyone that has done it will an accurate build process for this so it looks like we have to guess a little.

Still was does seen obvious is that we should be using 2 blocks to create this instead of one. A bandsaw, chisel, gouge and drill press appear to be the tools of choice for making this.

First thing I would do is make a template on the computer and print them out several times for each face (4 assuming you don't have any oops moments.) You should be able to draw this out with a circle in the middle and a series of intersecting lines. It looks like the block is cut up into 16 equal parts. That gives us angles of 22.5 degrees. So with that in mind: 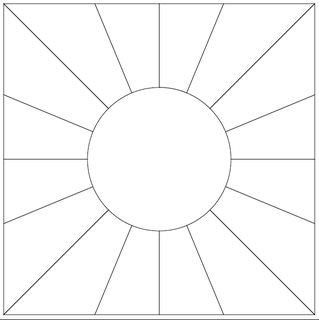 Then you could colour or mark the template to show what needs to be removed. The kerf of the blade should allow the to fit well if both blocks are cut from the same template

I think that you should cut the circle out first. Using a Forstner bit, like Steven suggests, would ensure you get a flat surface when you stop drilling. That's a lot of waste to clear out so make sure you clean out the hole as you progress (not while it is on of course). 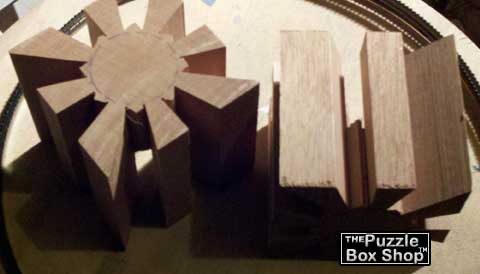 Image from The Puzzle Box Shop

An after thought would be you could still use the template and if the outside edges don't match up perfectly then you could just trim with the bandsaw to make it square.

According to the site the where you pictures come from they put an ebony veneer on the end grain of that mahogany wood. Guessing that was done to help make a more uniform stain/finishing. The second set of blocks (candle holders maybe?) also look like they have a veneered top.

The two boxes in your picture both appear to be composed of many individually-cut parts.

If you look at the zoomed-in pictures of the one on the left, you'll see that the direction of the grain is inconsistent on many parts. If you look closely at the one on the right, it looks as though the exposed faces, edges, and ends are all veneered.

You can produce a more seamless-looking box as follows:

My guess at how they built this: Start with two identically shaped squares. Core out the center half way of each one with a forstner bit. Then trace the matching patterns onto each piece and cut them out with a bandsaw.

It might also be possible to use a router to cut out the groves instead of a bandsaw.

Either way, you're going to need very accurate measurements and marks to get this right. Probably best to cut it a bit "tight" and then chisel down to fit.

6
How to make a louver vent in a board?
11
Router tears wood, leaves streaks
6
What is the functional purpose of fluted dowel?
5
What tools could I use to cut a turned chair leg in half vertically?
4
How to cut round corners on a 4x4?
1
Table saw bogging down more than usual
0
How to make small wooden toy pieces
0
Trouble with sharp turns on scroll saw. Is my problem technique or equipment?
3
Cutting a wooden ball in four pieces
2
What is the best way to cut this oak cladding for the best fitting angles?