Joining corners in a loft bed

I'm making a loft bed, and would like to know if the way I plan to join the corners will be sufficiently strong to hold up say 120kg in the second floor. 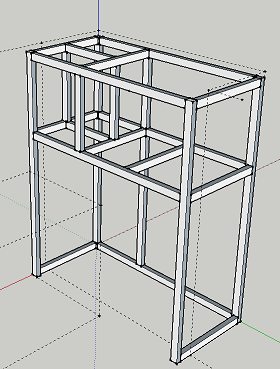 I think it will be sufficient with 80mm screws to join on the the 48mm side, is that correct?

On the 68mm side of the corner pole where the long 1784mm beams will experience more tension, especially on the second floor, I plan to use the same 80mm screws for fastening and add angles below for holding it up. But I'm not sure if this is sufficient to hold up a bunch of jumping kids :P

The design would have been more sturdy if I had a pole down on the front, but the ladder is going on the inside. 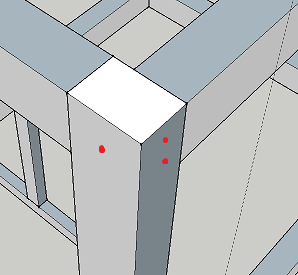 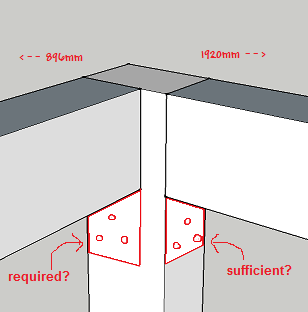 The good news is that, according to the sagulator, your design should be able to hold a static load of 120kg just fine, and the combination of butt joints and angle bracket reinforcements should support that unmoving, static load as long as you use lag screws or heavy-duty construction or wood screws. Do NOT use drywall screws; they are too brittle and are more likely to shear or break.

Now for the bad news. Your structural design is rather weak, and with 120kg moving around a little on top, I would be very concerned about the whole thing starting to lean toward one side (racking) before catastrophically collapsing. I'll cover a few improvements you can make to make your design stronger.

Screws into endgrain do not hold very well

That section title is pretty self-explanatory. If you drive a screw through one board and into the endgrain of another board, the screw will be much more likely to pull out of the endgrain than it will if you drive the screw into the face or edge of the second board. Toenailing or its fancy cousin, pocket hole joinery, takes advantage of this concept and basically runs the screws in the opposite direction (but at a slight angle, since that's more practical than growing a tree so it will have screws sticking out of its end grain).

Simply put, racking is any lateral motion where the top and bottom of a structure are moving in opposite directions relative to one another. If you don't properly reinforce against it, racking force can exert tremendous force on your joints, especially right-angle joints, causing the joints to fail.

I would highly recommend adding some diagonal braces across the back and sides to reinforce against racking. Or you could install plywood or MDF panels across the sides and back to make the structure more rigid. You could miter the ends and add them in place of the small angle brackets. Or you could use a much larger angle bracket that extends out further from the corner. Either way, you want your structure to be made of big triangles or you want to fill in the rectangles to resist racking.

In addition to the greater load-bearing capacity, you can spread out your screws a little more, which will help strengthen the bed somewhat against racking forces.

How are you going to get it in and out of the room?

You probably don't want to build a complex structure like your design entirely in the room, and even if you did, you aren't going to want to completely dismantle it in order to get it out later. If you examine mass-produced wooden frame beds, you'll notice that the bed often comes apart very easily by lifting and removing the sides, leaving you with two sides, a headboard, and a footboard. Redesign your loft bed so it's made up of a few components that can be easily carried through a zig-zag hallway, up twisting staircases, and through a person-sized door. Consider using knock-down furniture connectors such as the bed rail brackets I mentioned in another furniture design answer.

You can replace the butt joints with doweled or mortise-and-tenon joints, pocket hole joints, half-laps, or any number of other joints or combinations of joints. Pretty much anything is stronger than a simple butt joint, though with some of the other reinforcements I've mentioned above, the butt joints will be strong enough.

That said, you can add cleats on the inside corners of your butt joints so that you can screw into the edge or face grain of both pieces, rather than relying on a screw holding in endgrain without splitting the wood.

Also note that these other types of joints either require glue or can be further strengthened by adding glue. Granted, you may need to make special considerations for glue joints if you also want to make the bed knock-down, but it won't be too difficult.

If you'd like to avoid using hardware, look to Japanese compression joinery as an alternative solution

"New construction is usually with nails, bolts, screws, but we still actually use joinery - Which would be wood and wood expanding, contracting with each other. So this is actually something that lasts forever."

This means your frame could be disassembled as required, without worrying about the damage caused to your wood by screws and nails.

Lap joint and through mortise 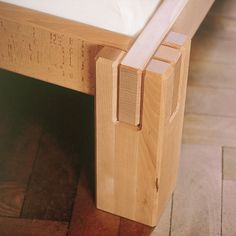 Through mortise with lapped tenons

Again, another really strong joint, but a little harder to cut. This would certainly be useful for the middle horizontal beams. 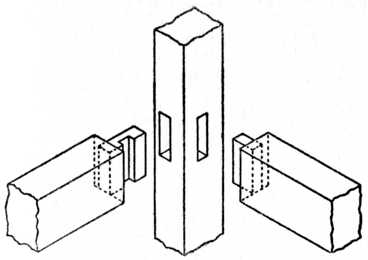 Also pretty easy to cut. This joint could be used at for the 3-way intersections that occur in your horizontal beams 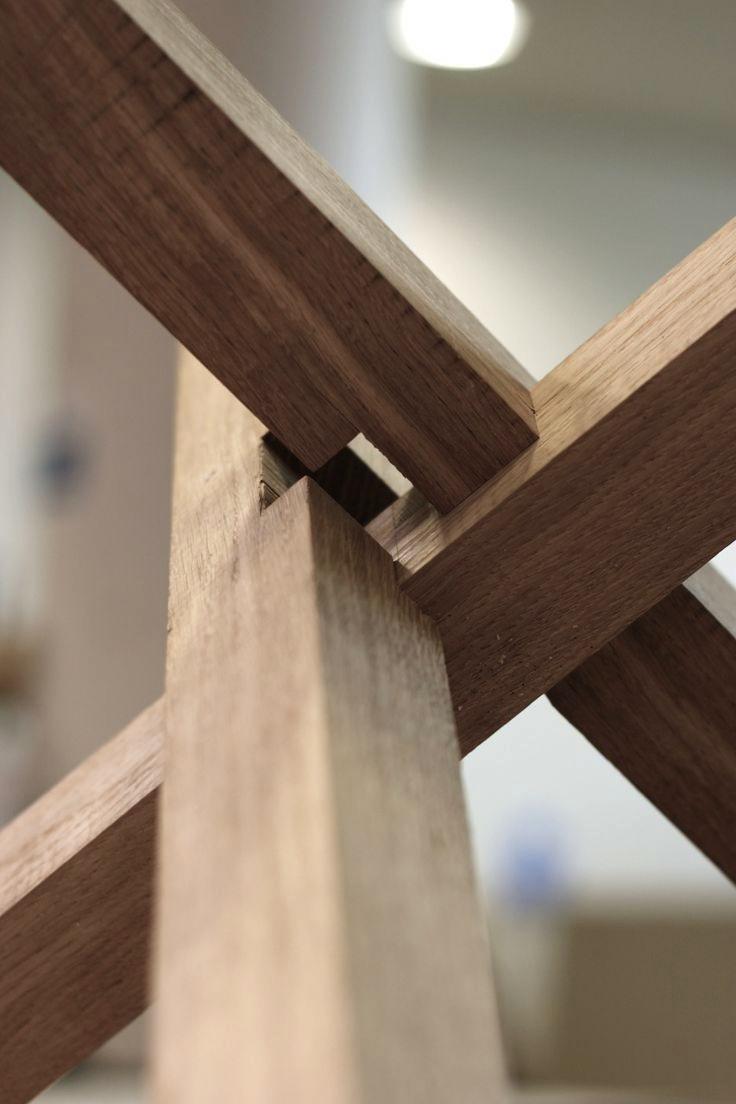 Not necessarily a Japanese joint, but could still be very useful to you in your bottom corners where you can rely on gravity to hold everything in place.

Rob's answer is extremely detailed and thorough but I'll answer based on the assumption that you don't want to upgrade your joinery in any way.

Screws alone could be sufficient for something like this given the length of screw you list. You didn't specify the wood you're using and this is a critical factor for structural strength as well as its holding power when it comes to screws, so assuming it is softwood I think it's vital that you drive in any that will enter end grain at a slight angle (toenailing as rob's answer refers to). This is less critical for hardwoods but is worth doing with them also.

While the screws may be sufficient I think you should reinforce every joint in one of two ways.

If you can ensure your mating surfaces meet very accurately at 90° and that the end grain is sanded smooth, glue each joint. This will add significantly to the strength, far more than most people would suppose*.

If time or equipment limitations don't permit refining the end grain faces as needed for a good glue joint I think you should use some steel brackets for peace of mind. Even the smallest type shown below will greatly strengthen the overall structure. 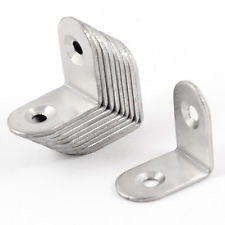 *Recent testing of glued end-grain/long-grain joints has shown that despite the traditional belief handed down to us that this is very weak it can in fact create a joint stronger than the surrounding wood, i.e. breaking it apart tears off edge grain from the verticals instead of cracking through the glue joint itself. See this YouTube video for a brief demonstration.

3
What type of wooden joint to use connecting three wooden beams
1
Is this bunk bed design feasible?
10
Creating my first wooden gaming table
3
Weight bearing for a loftbed and wood only joints

7
Best way to make a small detachable ramp on a dog house?
5
Joining an irregular, detachable modesty panel together and to an irregular shaped desk
2
Joining 3 wooden cubes with swivel joints
3
Is there a better way to join these two boards for a platform bed?
2
Questions around designing and building an indoor climbing frame
2
Reusable Desk design: how to join pieces?
3
Loft bed design
3
Need help with design of entryway bench joinery
1
Joining 2x4 and 4x4