I have made another trip to my grandfather's shed and I found some more tools that I am very interested to have and use (like the adze I got!). I have been watching enough episodes of The Woodwright's Shop to know that I found a scratcher gauge.

Also with it was what appeared to be a pair of mortise gauges. One is pictured below. Good guess is that it is homemade so there's nothing to look up. I say "appeared" because all the mortise gauges I have seen both scratchers are on the same post with one of the "nails" being adjustable. 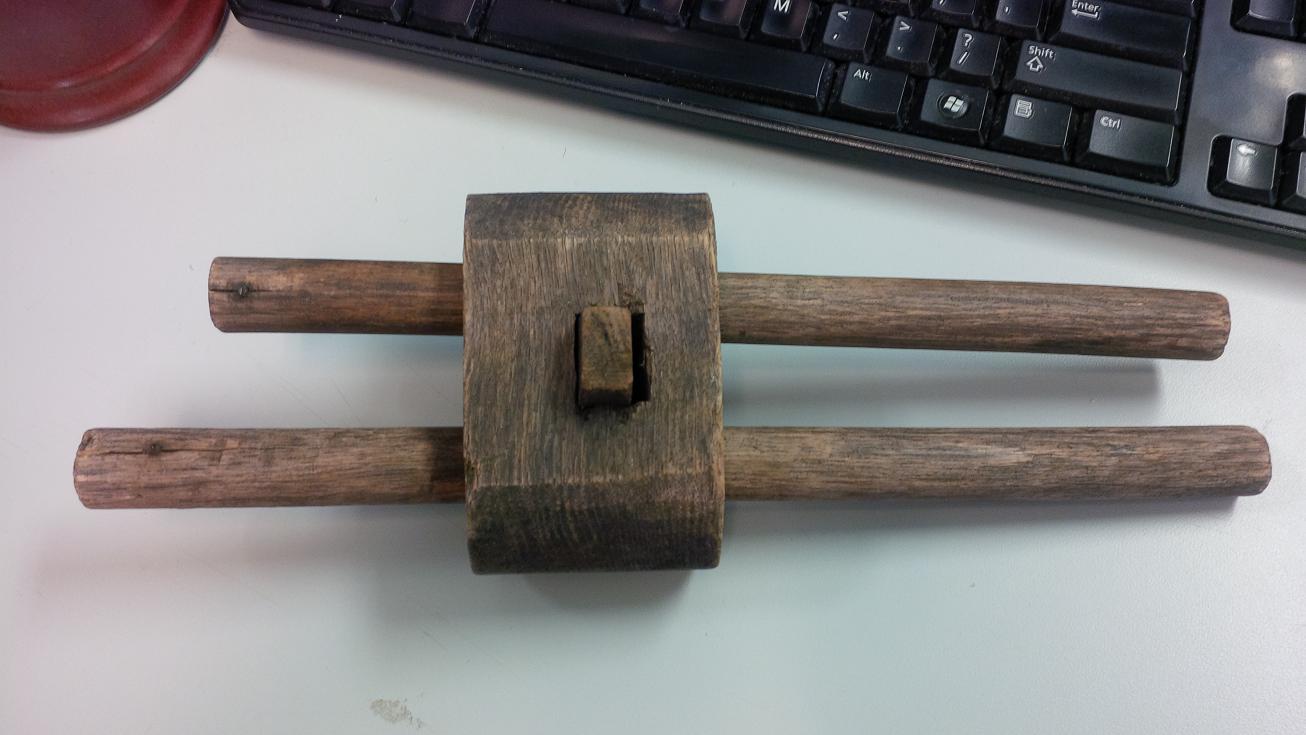 My problem with this is that: If you were to use this for a mortise you would have lines protruding the mortise area which could be seen.

Am I wrong about what this is? If I am right would you just use this like a regular mortise gauge?

For this gauge, I would imaging that you scribe with both beams individually instead of scribing with both points active at the same time.

So, if you're setting up the inside cheek of the mortise, you scribe with the shorter beam. Then rotate the tool slightly and scribe the outside cheek with the longer beam. This is a similar system to the Veritas Dual Marking Gauge (pictured below, images from Lee Valley), which I own and operate in the same fashion. 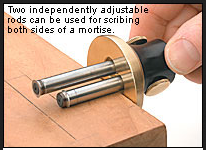 Note that this would require rotating each of the beams slightly opposite each other so that one is not active when using the other, or even having each point on opposite sides of the gauge.

I think this could be one of two things, either a double marking gauge so you can have two settings held simultaneously on the one tool (just for convenience, not specifically for mortising), or a rudimentary mortise gauge.

My problem with this is that: If you were to use this for a mortise you would have lines protruding the mortise area which could be seen.

Some woodworkers don't mind visible gauge marks on their work, but in the past at least it was quite common for final dimensioning to be done after the mortises were cut (most noticeably the 'horns' being cut off) and any final planing, even just scraping, would naturally erase any gauge lines.

Not the answer you're looking for? Browse other questions tagged tool-identification traditional-techniques measurement or ask your own question.

12
Is this a specific kind of hand drill?
22
How can you make a square without a square?
11
Setting precise depth on a table saw with no depth gauge
9
Traditional woodworking marks
7
What would be the UK equivalent of the common US 2 by 4 (not just by size)
3
Resources for wooden furniture projects without glue, nails or screws
0
Remove little material from a wooden piece with manual tools