How do I clamp box joints?

When making box joints, per a number of articles I've read, I've left the fingers a touch longer than the thickness of the board. So if I'm making joints on 1/4" plywood, my fingers might be 5/16" long, and then I just sand them down at the end. Some authors (Matthias Wandel as an example) even suggest cutting the fingers with a table saw.

An issue I'm encountering with these is that it becomes difficult to clamp the joint tight, since a clamp ends up pressing on the extension of the fingers sticking out, not the second board you are trying to clamp. I tried clamping a square to inside of the joint, which works well for keeping the joint square, but doesn't seem to apply enough pressure to pull the fingers tightly together.

Is making the fingers a tad longer poor advice, or is there another way to clamp this type of joint? I had considered making a jig with fingers and just a small amount of wood, but with 1/4" plywood, and only 1/16" excess material, it seems unlikely this would stay in place with clamping pressure.

For clamping box joints, I've found that offsetting the clamps just to the inside of the fingers ensures you will be able to pull the corners tight. With the clamps there, you will still be pulling the joint closed while introducing relatively no bending to the boards. Picture below (source: RodsWoodworking.com). 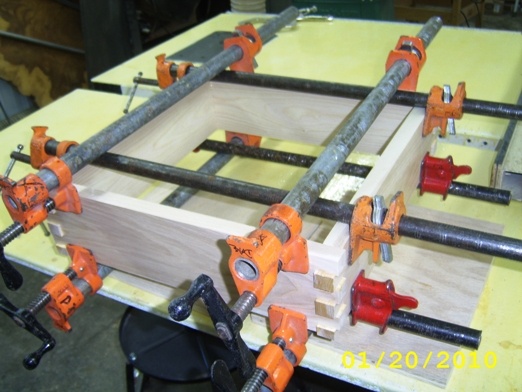 You could, as you suggested, make some jig with matching fingers that interlace with the box joint, giving you bearing on the portion of the joint you're trying to press. This can be rather tedious though, since you need to make a minimum of eight (two per corner) to properly clamp a box, possible more depending how deep the box is. As suggested by @keshlam, you can buy box joint cauls that serve this purpose.

Another way I've seen is to use offset blocks (or cauls) and then clamp around the entire assembly using ratchet straps. This is illustrated in the picture below (source: LumberJocks). 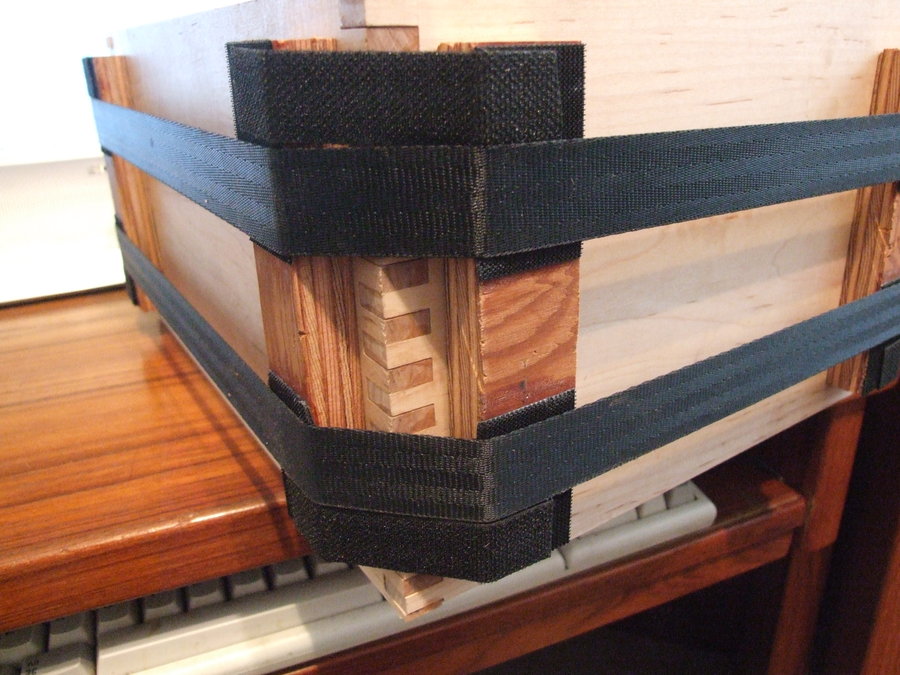 Per the suggestion of @keshlam, it's prudent to coat wooden cauls with packaging tape (or another surface that glue will not stick to) so that they don't become part of your box inadvertently. Also, you might try lining the very edge of your joint with blue tape to catch any squeezeout, similar to the image below (source: StartWoodworking.com) 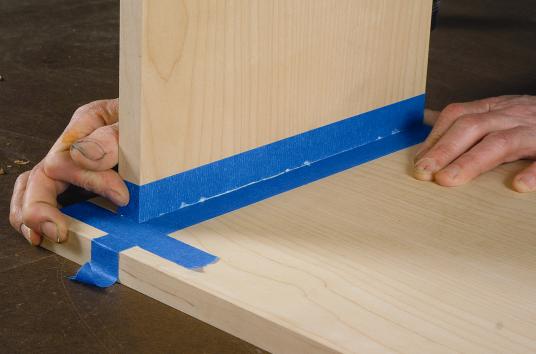 I tried clamping a square to inside of the joint, which works well for keeping the joint square, but doesn't seem to apply enough pressure to pull the fingers tightly together.

I think that's basically the right idea but could do with being implemented differently: 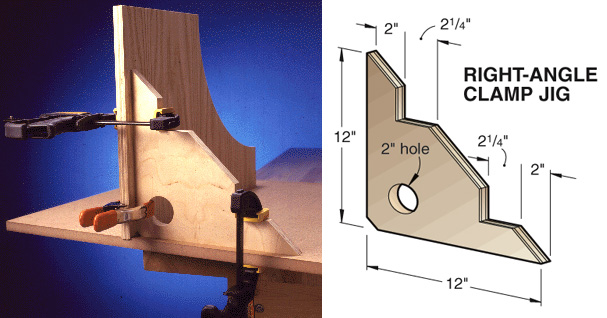 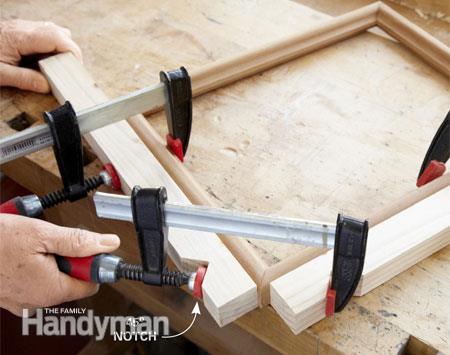 As you can see the clamping blocks themselves support the thin stock and work simultaneously to keep it straight while providing the necessary clamping action to squeeze the joint firmly.

Is making the fingers a tad longer poor advice

I wasn't familiar with this prior to your question but I think I can see why this might be advisable in some situations.

I would however recommend that you not do this if your cuts don't result in unacceptable amounts of chipout, as it saves on later work while simultaneously makes clamping more straightforward during the assembly phase.

Try this setup.Green is jig. Red is where clamps go. 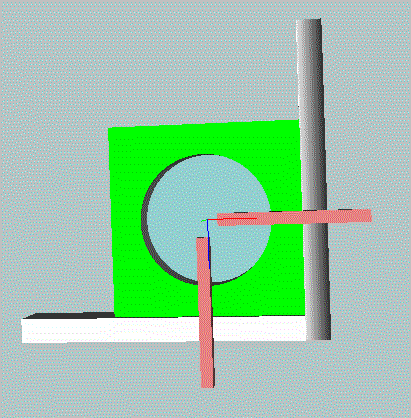 I wanted to elaborate a little bit on what grfrazee touched on with his answer. Gluing cauls or "Matching Finger" cauls could be a great idea. Indeed, as you have read, some instructions/teachers will advise to let the pins protrude the surface. This can make it easier to create a flush surface after but it can also be used as an aesthetic! If they were rounded off for instance.

Making these cauls could be considered a waste of time and wood on just one project. However, if you tend to make the same dimensions of finger joints, or even dovetails, you can still get good use out of cauls. They are simple and if created properly almost guarantee that pressure is being applied in the correct position. Risk is usually minimal just outside the joint but if being square is essential it would not hurt to consider.

There is another great video from The Woodright's Shop called "Pinch Rods and Squeezy Blocks". The latter being the name of how Roy Underhill's refers to his gluing cauls. A picture below show his dovetail "squeezy block" which took less than a minute to make using a chisel and one of the cut boards as a rough guide. 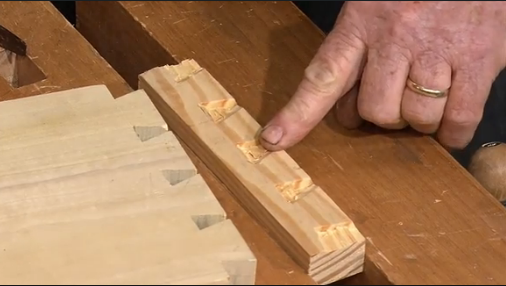 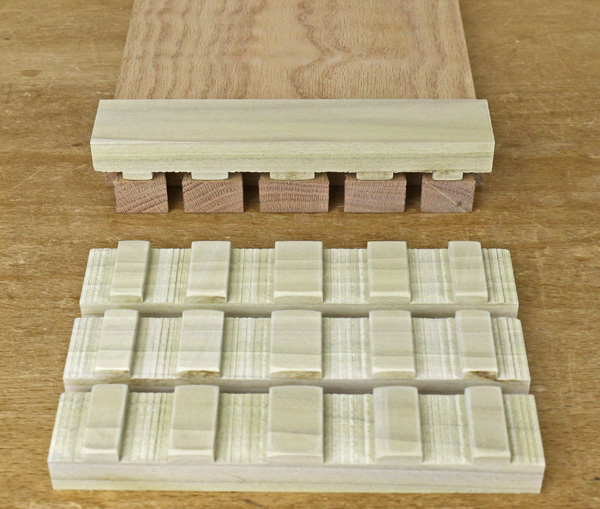 This can be rather tedious though, since you need to make a minimum of eight (two per corner) to properly clamp a box, possible more depending how deep the box is

But they are not really hard to make and if you can use them again then why not. From the Crafty.com post

It’s worth the 20 minutes it takes to make these.

As a bonus that same video show how to use (and make) pinch rods to use to make sure your box is square!

Not the answer you're looking for? Browse other questions tagged clamps box-joint or ask your own question.

8
Why thread both ends of a pipe for a pipe clamp?
9
How to clamp where clamps cannot reach?
5
Finger Joints on a 2x10
6
8 to 12 mm plywood box joints: brackets vs glue(box joint) vs screws
1
Making a box joint jig
5
Box joints for this table with just jigsaw and chisel?
0
Where to get half of a pipe clamp
6
Glue-up for butcher block-style countertop
2
What type of clamp is this?