How to can I repair/mitigate rot in the center of a Western Cedar tree round?

I want to turn a large western cedar tree round into a low table for a covered outdoor area.

The round is from a 100-ish year old cedar tree. It was freshly cut (one month ago), is roughly 4 feet in diameter, around a foot thick, and has some rot in the center. How should I deal with the rot?

This will not need a fancy finish, but I don't want it to look shabby either. It is something that will sit outdoors in a covered area under a deck between two chairs in the shade and next to our garden. Think iced tea or cold beer on a hot day. 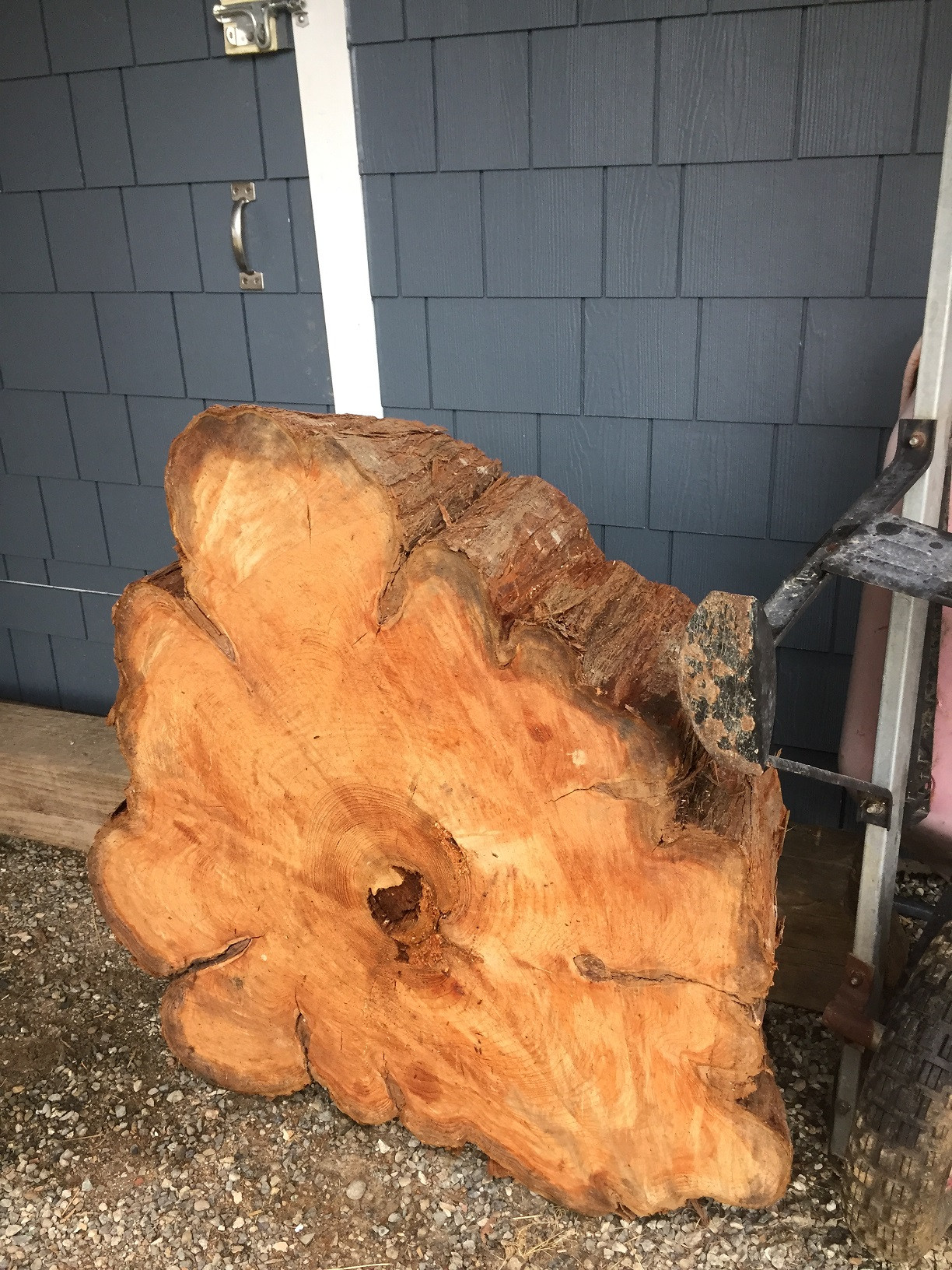 As a corollary to my answer on your other Question:

Removing the rot will not only help keep the rest of the log rotting along with it in time, but it will also help with cracking in that you won't have the center pith.

There are many ways you could deal with the rot.

In addition to grfrazees answer I would recommend treating the piece liberally with ethylene glycol, what can be bought for little money in the form of concentrated automotive antifreeze. This will kill any fungal mycelia in the part of the wood that still appear healthy. Additionally ethylene glycol is hygroscopic and thus mix with the water contained in the wood all the way through.

As ethylene glycol evaporates at a far lower rate than water it will stabilise the wood, similar to polyethylene glycol (what is non-toxic but doesn't kill fungi). If applied in sufficient amounts this can stop the cracking altogether. It may affect the colour of the wood to a small degree however, what is probably not an issue if the round is kept outside.

Ethylene glycol is moderately toxic to all eukaryotic lifeforms (plants, fungi, animals/humans). However after it is absorbed into the wood you would have to eat the wood itself to induce any of it's toxic effects. It got a bad reputation because of it's sweet taste what makes it likely to be ingested in large quantities by pets and children, resulting in death. For that reason automotive antifreeze is treated with denatonium these days in most countries, what makes this accidental ingestion far less likely.

You may want to look at this article for further information on the subject, including the use of borates to prevent fungal growths.

12
How can I repair a split in a board?
4
How should I secure my treehouse to the tree?
8
How can I reduce the gloss of a varnished piece of furniture?
7
How can I prevent outdoor cedar projects from losing their color?
10
How can I keep a cedar tree round from checking?
4
How can I turn a couple of logs into stubby legs for a outdoor tree round table?
2
How to repair the edges of a plywood
1
How can I finish this to protect it from the elements?
3
How can I seal/stain white cedar to make look similar to its original light color?