What are some suitable woods to use for tool handles?

We all occasionally have to replace a tool handle, be it an axe, a shovel, a sledge, whatever.

The standard handle materials seem to be hickory and ash. I've bought my share of hickory handles from hardware stores and have no issues with them. I use ash for lathe tool handles and have used it for file handles as well.

Recently I made a hatchet handle out of osage orange (hedge). Historically, osage was used for bows in the southern US, and I've heard legends that an osage bow was worth a horse and a blanket (that's just hearsay, don't quote me on it). It seems to be holding up well, as I would expect from a dense, springy wood. Also, I expect the hatchet head to rust out before the handle rots due to osage's extreme longevity. 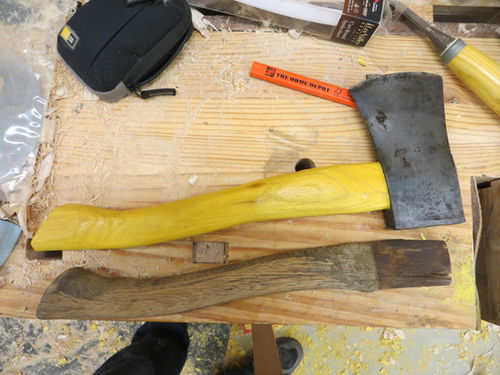 One website states that hickory and ash are really the only (US domestic) woods worth using. I've thought about trying black locust, also due to its rot resistance and toughness, but this is not readily available in the Chicagoland area. Another forum thread discusses suitable woods in terms of vibration transference. This website also seems to suggest using whatever is available locally and not worrying too much.

So, what other woods are suitable for tool handles based on your experience? Sometimes, you just get better results making your own handles than buying them at the store, so knowing which species work (and which species last under use, abuse, and time) would be very helpful. Note that I am more concerned with "long" tool handles, not so much short ones like one would see on a plane or a screwdriver.

One website states that hickory and ash are really the only (US domestic) woods worth using.

Obviously just one man's opinion and a gross over-simplification. It's also inherently misleading because it's light on detail.

Update: I originally repeated here the (supposedly) sage advice that it is sapwood only that you want in the handles for striking tools, but it turns out that this is another long-standing myth1.

This website also seems to suggest using whatever is available locally and not worrying too much.

I think this is worth paying attention to as they make many sage points.

So, what other woods are suitable for tool handles.... Note that I am more concerned with "long" tool handles

I hate to say it but it might best be summarised as: forget the species, what's this piece like?

Wood is inherently a variable material, so one piece of hickory (or ash, poplar, oak, willow, yew, walnut, birch, etc. etc.) is not equal to another. And no single piece is quantified by a broad description of the species, no matter how accurate that description is in general.

Another consideration: beyond the species, beyond the flexibility or the shock-absorbency of the wood chosen, grain orientation in the handle is perhaps of equal or greater significance. The most obvious aspect of this is the grain should be aligned with the axis of force when the tool is in use (it should run front-to-back in the eye of the tool head). Additionally, for a long haft grain run-out should be minimal or absent. Both points are well summarised in this diagram from a US Forest Service handbook:

An extensive guide to axes which includes a section on 'hanging' that you might find informative:
An Ax to Grind: A Practical Ax Manual. The author is firmly in favour of hickory!

1 Despite how often this is still repeated as Stuff You Should Listen To, handed down from old timers who "really know their stuff", this was debunked before most of those old timers were born! The following quotes from a 1966 pamphlet put out by the Forest Products Laboratory, but the research this is based on actually started before WWI (the earliest reference to it that I have found is from 1913).

"In over 500,000 tests made by the Forest Products Laboratory on woods grown in the United States, no effect upon the mechanical properties of the wood due to its change from sapwood into heartwood has been found in most species."

And specific to our interest here, it goes on to say:

"...nor is the sapwood of hickory and ash intrinsically stronger than the heartwood, as is sometimes claimed in connection with handle stock."

Another consideration is the wood's effect on steel. Some woods like oak have acidic tannins in them that stain and promote rust, so oak is rarely used for that reason.

Consider the type of stress the handle will be subjected to. Then the handle's best wood choice will be a function of resistance to the abuse normal use will inflict on it.

Long handled shovel - Resist the tendency of the retaining screw to break loose or split the tail of the handle.

So, since no single species of local wood answers the call everywhere, traditionally there was no one best wood for handles. The long experience of others before us shows what works well.

Example - most older quality chisels, made in the USA, have hard maple handles. Rakes and shovels usually had elm handles because of the helical grain. Both hickory and ash were used for axes.

Your osage orange example is what I meant by local woods in the past. It was not easily available in New York State, for example. I live in Southwest desert and it is available here today. Doesn't grow here. 40 years ago I could not buy it anywhere.

Personally, I have to stay away from working in hickory(allergy, go figure), so I've experimented with a few other woods. I have really enjoyed the few handles I've made from local maples. It tends to be exceedingly straight and clear grained. Other good choices (and also another bow materials) are lemon wood and yew. Although, be careful with the Yew dust, particularly the bark, as it contains a few nasty chemicals/toxins.

I agree with @Graphus entirely. Often, it will come down to the particular piece of wood in hand. The clearest, hardest poplar you come across will still probably beat out a twisted, knotty piece of Ash.

Not the answer you're looking for? Browse other questions tagged tools hand-tools wood-selection handle or ask your own question.

2
Can i use Aspen wood for my beginner axe handle?
3
How do you orient the grain in a tool handle that takes shocks?

11
What woods are soft enough for glazier points?
6
What are the handles/wheels called when making a homemade vise (like a moxon?)
5
What tool can cut thin wood or acrylic/plexiglass without melting it that is suitable for NYC apartment?
6
What woods take stain well?
2
What are some good wood choices for making signs?
4
What wood type is suitable for a childrens toy?
0
What is the name of the second tool
0
Preparing New Tool for Use and Ongoing Care