How can you safely operate a router table without a fence?

I am now the proud owner of a used router and table. I am just getting ready to use it for the first time and was reading some emails and saw the following ad. 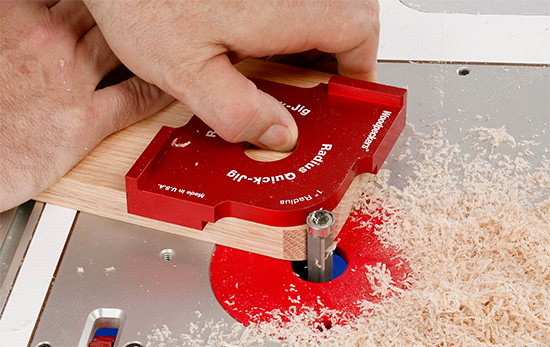 So almost all pictures I see of router tables have a fence or guard in play. In that picture they are not using a fence. I would think that the super fast moving blade would be a reason to have something for safety.

So can you operate the router, on a table, without a fence or guard safely? Assuming I can what, besides a fence, can I be using on the router table.

The bit they are using in that picture has a bearing on the top part that is sticking out of the table (which is actually the bottom of the bit, because routers are inverted in a router table). Bits with bearings like that are safe to operate without a fence, because the bearing spins, acting as a guide as the stock is pushed along the bit. It doesn't matter which angle the stock approaches the bit from, because the bit is symmetrical, and as soon as the stock hits the bearing, the bit will not be able to cut any deeper.

If that is difficult to picture, it may be helpful to view a video of it being done. Here is one I found on YouTube.

Bits without bearings generally require a fence to use. With no bearing, there is nothing controlling the depth of the cut. The fence does that for you.

Sure. In the picture above, the bit has a bearing on it, which sort of acts as a fence. I have that exact set of Woodpecker's radius jigs and use them exactly as pictured.

I don't know what purpose there would be in using a non-bearing bit on a router table without a fence or some sort of fixture to guide the cut, but you could do it.

You will often see a router table with a place for a post near the bit. This allows you to pivot the work into the bit in a more controlled manner.

As a point of comparison, I operate a router table without a fence or guide roughly half of the time that I use one.

For example, if I am making picture frames, I will use a rabbet bit with a guide bearing to rout out the space at the inside-back of the frame where the glass and picture go. If one uses push blocks and keeps one's hands sufficiently far from the bit, there is little danger involved. If I am doing a simple edge profile on the frame (roundover, ogee, etc.) I will use the bit's built-in guide as well and not worry about trying to set the fence just right.

Otherwise, I have seen people us a router totally freehand (no bearing on the bit and no table) for a few purposes (clearing the waste from dovetails and inlay for two examples). It can be dangerous if you don't know what you're doing, especially if you try to take too big of a cut. You also have to be very cognizant of grain and keep a firm grip on the router to keep it from skating all over and ruining your piece.

13
Is a plunge router suitable for router table work?
8
How to determine if a router bit is safe to use?
4
How do you prevent screws or other metal from falling in the hole on your router table?
6
What router to use for a homemade routertable?
3
How do I safely accomplish plunge cuts on a router table?
7
Use a fence with a router bit with a bearing?
3
Building new router table by re purposing components of an off shelf router table-need advice
1
Handle cutouts safely using a router
1
Why do many router table fences have a 45 degree vertical edge at the router side?