How can you make a square without a square?

So how can you make a square, without using a square? How were they originally made if the accuracy needed to be right, but modern methods of measurement and manufacture were not available?

I'm just starting out with woodworking, and as I don't have a project I want to complete as yet, I'm interested in making many of the tools I'd use as part of the learning process (mallets, squares, marker gauge, etc.).

Budget is very tight, but I don't mind incremental steps to the end goal, such as making a just-about-good-enough bench on which to build a better one. I've been watching a lot of Paul Sellers Youtube videos and they have spurred me on.

So how can you make a square, without using a square? How were they originally made if the accuracy needed to be right, but modern methods of measurement and manufacture were not available.

A long time ago, the Great Pyramid of Giza was built. This was way before any modern, recognised system of working out a square - and yet it is square.

We also know this, Pythagoras' Theorem:

So, if you create a triangle that has edges of length 3, 4 and 5 you can create a right angle.

How can they create a triangle like this? Tie 12 knots in a piece of rope, equally spaced:

And then make it into a triangle: 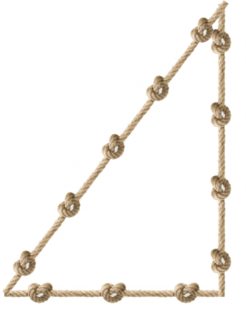 And that gives a right angle.

Budget is very tight but I don't mind incremental steps to the end goal.

I guess you have a piece of paper to hand? If you feel that is cheating, you could use a ruler to draw that triangle, or make it yourself with string.

Well, to start, today's squares really are pretty cheap and it wouldn't cost much more than the materials if you are going to make it out of metal.

However, making one out of wood, if you have a rectangle with the opposite sides the same length, then measuring the distance between opposite corners is the way to go. When both measurements are equal, all corners are 90 degrees.

There are two very simple methods, the first relies on measurement, the second is empirical.

If accurate measurement is available you can rely on the 3-4-5 rule, already referenced in the Answers you've received.

I happen to have just made an accurate pocket try square using this method: 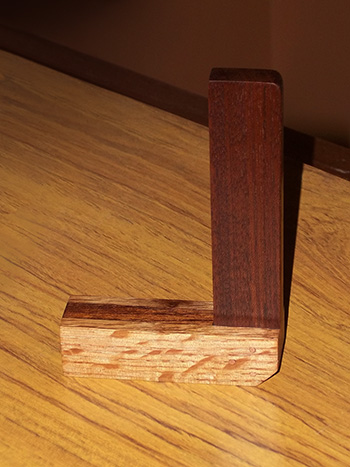 Assembling the parts dry I marked 6cm across on the short arm (the stock) and 8cm up the blade. Then I applied glue and inserted the blade into the stock and lightly clamped, adjusted the position until I measured 10cm precisely between the two marks and left it until the glue had set.

After the glue was hard I drilled through the joint for three pins to lock the joint securely. I used copper here but other metals can be used as well (even mild steel, e.g. sourced from paperclips or basic wire nails) and if preferred wooden dowels can be used instead of metal. There isn't any significant difference in strength or stability for a piece like this going with wood over metal, I used the copper purely for looks.

The second method can only be used where you have a long enough working window on the adhesive used, or you don't glue and are merely holding the blade in the stock (e.g. by clamping force) and can then can lock its position in place with pins, nails or screws without the parts shifting. What you do is directly compare the squared line drawn by the try square against itself. Working from a perfectly flat edge, once there is no discrepancy between the squared line drawn with the try square used one way and then flipped over you have a perfect 90° angle:

This is an excellent idea and you'll learn a great deal doing this, in addition to creating a host of useful tools, jigs and accessories in the process of course. Please be sure to ask further questions if you'd like input on other things you might like to build.

Here's an existing Question about a that you might find informative: What's a bench hook?

If you can draw straight lines, you can make a perfect right angle using a compass - see this simple diagram: 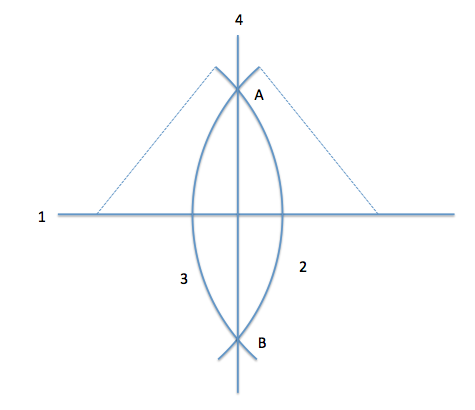 Draw straight line (1), then parts of a circle (2) and (3) - as long as they are centered on the same line and overlap, their exact distance doesn't matter. Join the two points A and B where they intersect with straight line (4).

You now have two lines at a perfect right angle... and you should be able to use them as a reference to make a straight line.

Drawing an accurate circle is as simple as putting a pin at the center, a string with a loop at each end with one loop around the pin and the other around the tip of a pencil. The larger the scale on which you do this, the smaller the error will be.

This is how I am learning woodworking, and eventually metalworking, as well. It's a good way to go. Building squares is a nice little project.

You are right that there seems at first to be a chicken-and-egg problem here.

Suppose you can obtain two pieces of wood that have at least one flat, straight side. Those will be the outer sides of your square. Use one of the pieces to draw a straight horizontal line on something flat.

Temporarily join the two pieces together such that they can still be rotated with respect to each other -- like, put a single screw through them, or a single dowel, or whatever. Get them as square as you can. Then put one side along the line you just drew with the square arranged like the letter L, and use your new square to draw the perpendicular line. Now flip the whole thing over, so that it is now a backwards L, and try to draw the exact same perpendicular line. If the square is accurate, the perpendiculars will coincide. If it is not, you can estimate how far out of square your square is, adjust it, and try again.

Keep doing that until you get something that is as close to square as you want it to be, and put another fastener into the square so that it can no longer rotate, and hey, you have an accurate square built out of only an accurate straight line.

Now of course the question is "how do I produce an accurate straight line?" But that's another question.

How were they originally made if the accuracy needed to be right, but modern methods of measurement and manufacture were not available.

You do not say how far back in history you want to go. The ways that the ancient Egyptians made sure their building blocks were square are rather different than the ways that medieval carpenters used to make square buildings, and those are rather different than the techniques used to build square, accurate machine tools during the industrial revolution. Make your question more precise if you are interested in the history of tool building.

I've been watching a lot of Paul Sellers youtube videos and they have spurred me on.

woodgears.ca is also a good site for this sort of thing; there are videos there on how to make your own try squares, framing squares, and so on.

If you want to see how it was done 100 years ago without fancy modern tools you should really start with "The Woodwrights Shop" with Roy Underhill it's on PBS and has a lot of content available for streaming.

For your specific answer on how to make a square "square" Roy shows a really simple way in the episode "Try Square with Christopher Schwarz" http://video.pbs.org/video/2365021524/ The square itself is made of wood theirs is really nice but the "Truing" concept shown at 23:07 (mm:ss) could be applied to any 2 pieces of wood at approximately 90 degrees from each other.

In it's simplest form pace it on the edge of a table and draw a pencil line. Flip the square over to see how far off it was, use a plane or chisel to remove just enough wood to get it closer. Remember that you only need to remove 1/2 of the visible difference. Then Flip it around and draw another pencil line, etc. Until it is as accurate as you want.

But I'd suggest buying a try-square or other such tool. They are accurate, not too expensive and very useful.

I like Roy Underhill. I haven't watched that episode, but if you want to check a homemade square for squareness, it seems like the easiest way would be to take four pieces of material that are the same, for instance 4 6" sections of free paint stirrers from your local big box store, lay them over lapping in a square, put a nail through each corner and shift the frame till the diagonals measure the same. You square things up in a similar manner in carpentry. If you want to know if something is square, you measure the diagonals and adjust till they're the same. When they are, it's square. You could do this with the aforementioned paint stirrers or anything the same width/depth/height and when it's square, you could check your homemade square against it. No math involved.

I think the answer you're looking for is simply this. Some brilliant mathematician/astronomer a very long time ago figured out that, at noon each day around the equator, the sun will shine directly at a spot on the Earth. When this happens. A straight stick inserted perpendicular into the level ground will NOT create a shadow. Because the shadow is located exactly in the hole in which the stick is inserted. If this is done with a stick and a shallow pool of water, the result is a perfect right angle with relation to the surface of the water and the edge of the stick.

Not the answer you're looking for? Browse other questions tagged hand-tools traditional-techniques square or ask your own question.

6
What kind of woods can be riven with a froe?
7
How can I debark wood?
3
Measurements on a Try Square
3
Resources for wooden furniture projects without glue, nails or screws
6
How to make bottom face of beefy table leg flat and square with sides
4
How to make a larger rabbet by hand?
4
How to mount mirror in wood frame that is not square?
0
Is it possible to use a mortiser bit without a mortiser?
6
Checking squareness of a T-square
0
How to cut long angled cuts without a table saw?