Planing thin stock without the aid of bench dogs

At this point I do not have a bench that will support dogs. However even if I did I would have an issue planing the faces of my thin 3/8" wood. The bench dogs I have seen have a clearance of exactly 3/8".

I am very eager to use my hand-planes but I don't have the setup for it. I have a cheap work table, with plastic "bench dogs", that would be perfect to use but the dogs are too tall so I cannot use the plane with them getting in the way or damaged.

What I have tried...

What I have considered...

I have seen jigs where you would screw pieces of wood at opposite ends of the work piece and use wedges to tighten. Given the wood I am using I would have to have stops with shorter wood. Planing the stops is fine, since it is scrap anyway, but I don't how to secure them without damaging the plane (screws would be recessed but with the wood that thin I would expect the plane to break the wood).

What I have been doing

For now I have been placing the board on the floor and using a belt sander with my foot as the stop. I am able to do about 80% of a face this way since I don't want sand my feet. What I then do is turn the board ( not flip over ) and finish the other 20% which would not longer be obstructed by my foot. This has lead to inconsistent sanding on occasion.

That being said ... Is there a jig /suggestion of what I can do so that I can hand plane the face of a pallet board that is only about 3/8" high? I am currently looking for a solution without the aid of bench dogs (since I am not capable of supporting them) but will answers supplemented by them would be fine.)

I think a simple mod here could get this method to work (I've used something similar myself when planing thinner stock many times) although it wouldn't be the primary way I'd suggest you go about it.

I have seen jigs where you would screw pieces of wood at opposite ends of the work piece and use wedges to tighten.

This is OK in general principle but I wouldn't recommend any holding system that relies on pinching the boards between stops (as happens if you had a wagon vice for example). With thin stock the potential for the material to bow upwards under the clamping pressure is too great, and even the slightest bow in the centre will result in the piece ending up noticeably thinner in the centre after surfacing both sides.

Is there a jig /suggestion of what I can do so that I can hand plane the face of a pallet board that is only about 3/8" high?

What you want ideally is a low-profile stop and there are a great many ways you can implement this. Since I presume you don't want the hassle of mortising into the top of your bench to allow the installation of a rising stop I'll mention three much simpler options.

The first one is so very simple but many people today are precious about their workbenches so are resistant to the idea. You drive one or two brass wood screws directly into the benchtop: 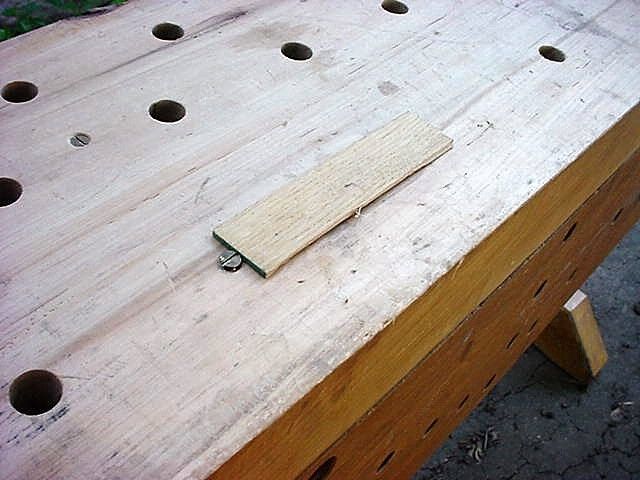 Not only does the edge of a screw head provide a surprisingly good grip on the end of a board this type of stop can be varied in height to suit the stock you're working on by simply being driven in or backed off (as well as driven home completely to leave the benchtop clear once more).

This method is not new and may go back as far as the 19th century, here it is as a reader-submitted tip in the June 1959 issue of Popular Mechanics: 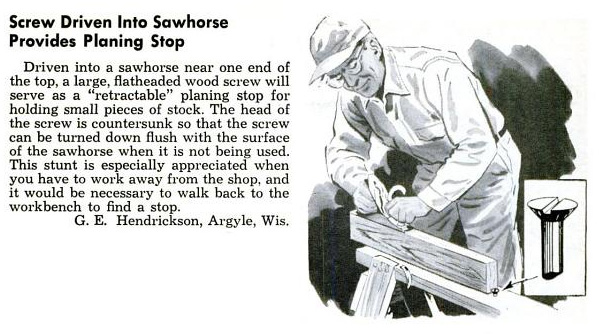 As in the above two images the screws can be used directly as the stop, but an alternative is to use them to hold a wooden stop across the benchtop against which the end of your board rests, as in the next image: 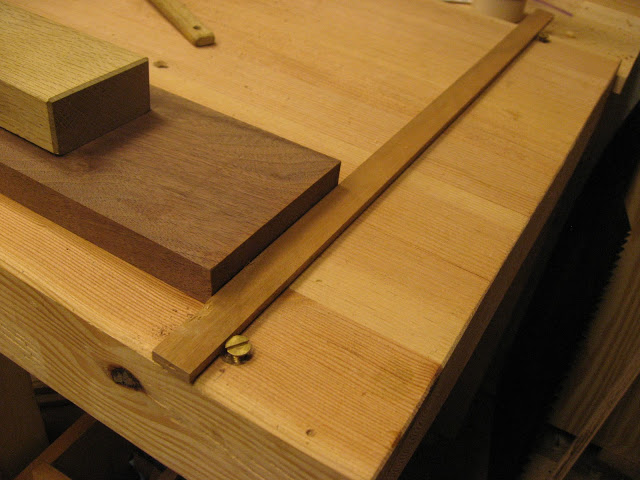 Second tip will work if you have a face vice, or dog holes in a front apron that would allow holdfasts to grip in a similar way. You make a type of planing stop that is a little like a T-square in form; these go by a few names, including a face-planing stop but sometimes are simply called a bench planing stop. 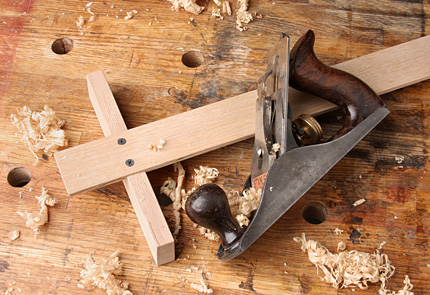 The short leg or keel is gripped in the jaws of the vice, or held by a holdfast, and the arm extends across your workbench as the stop.

Note: one design detail that isn't always incorporated into these is that the top of the keel block should be planed at a very slight angle (leaving the outside edge high, inside edge low). What this does is very firmly press the arm down once the keel is clamped securely.

As you can see shop scraps can provide the necessary material, a narrow length of ply and a piece of 1x2, so it's no problem to make two or three in multiple thicknesses to accommodate the planing of a wide variety of stock.

Last but not least, a bench hook with a low-profile back stop. Although bench hooks are commonly fairly small and primarily used as sawing aids the same basic design can be adapted for them to function as planing jigs (both for face planing as well as simple shooting boards).

And while they are typically fairly small, intended to be used across the bench, they can be made of significant size (in excess of 2' long if needed) to be used along the length of the bench: 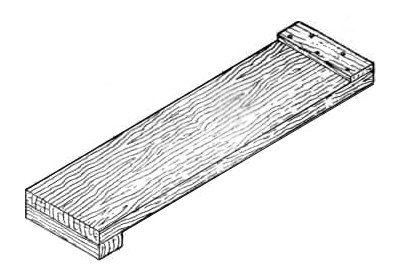 You could try retrofitting a plane stop to the end of your bench. In the example one here It is made in a way where you can raise it as little as you need. Even as low as 1/4" if needed.

I find it very useful and quick to add to a bench that can't take dog holes. Alternatively, I haven even just driven a screw into my bench and used that. 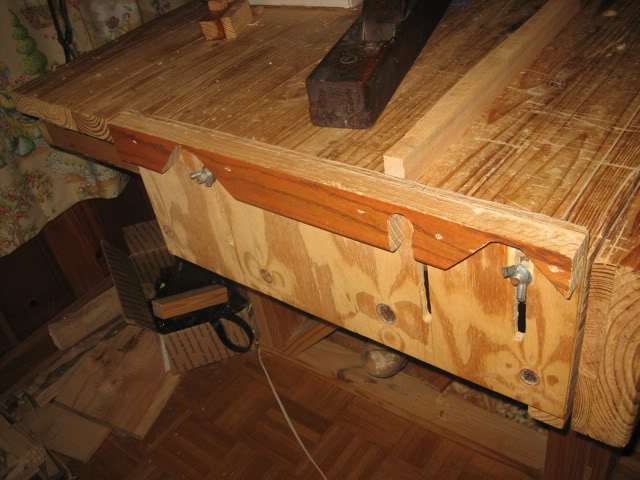 Image from the Literary Workshop

Use double sided tape to affix the piece you are working on to a thicker piece, and use your bench dogs. Similar to how you can use a sled on a planer to plane thin stock.

I use SpecTape from either Woodcraft or Amazon. It holds material very securely.

especially since you already 'hold' down the piece and turn it around I use bench clamps like these. You attach them to the top of you bench permanently. I have them on 3 corners (of my bench). they do an excellent job of hold your work piece and you can do most of the board then turn it around and work on the end that was held down.

If the workpiece width is less than width of plane blade I will mount plane in my bench vise and move workpiece over plane.

Can you make new, temporary(?), dogs that are shorter?
Friction like sand paper or sticky stuff like double sided tape might do the stuff.
Then there is the shooting board.
If the board is longer than you want you can nail it down. Preferably with something soft like dowels. Or drive the nails deep.

15
Best way to flatten boards by hand
10
Can you use painted wood in a planer without damaging the tool?
4
Different ways to set up a Number 4 bench plane
3
Planing thin material to consistent thickness using hand tools
4
How do I use a handplane to smooth a cutting board?
6
How to make bottom face of beefy table leg flat and square with sides
5
Hand plane gouging wood even with fine adjustments
4
How do I plane the edge of a board such that it stays square to the face?
1
How to face joint board longer than bench by hand
3
Using a left and right shooting board to square the ends of a board