Do wood cuts matter for wands?

I am having a wand made, and I wondered if wood cuts mattered.

Basically no it shouldn't. Assuming I am imagining the form of the wand correctly, the grain will run across the cross-section in nearly exactly the same way irrespective of the cut of the original piece of wood: 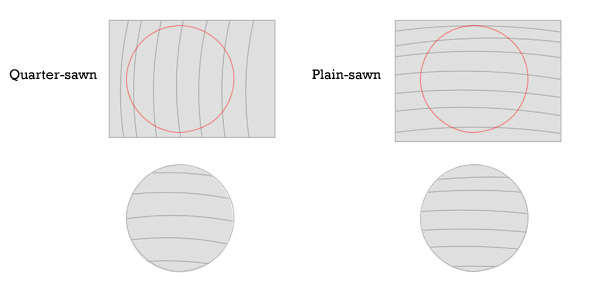 Grain orientation in the other direction on the other hand might contribute greatly to whether you end up with a stronger or weaker piece. If the wand is straight (somewhat like a drumstick or a conductor's baton) then straight grain that runs the full length will give the strongest result, but if there is what is called grain run-out (second image below) it will be more prone to failure if subjected to sideways forces: 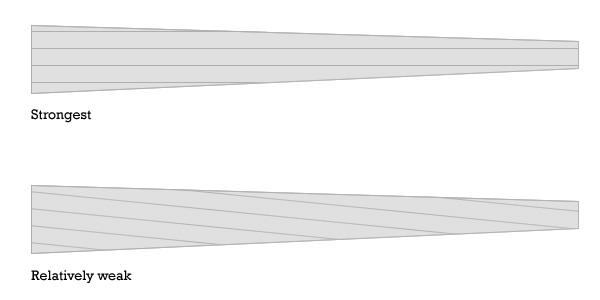 Note this is only relatively weak, very strong woods like oak and hickory can be very resilient even if the grain is less than ideal (as is the case on many modern axe and hammer handles for example).

I heard rift sawn wood is the best for strength in boards, but they only receive pressure from the surface.

Other things being equal quarter-sawn should be the strongest, and most stable (in addition to having the visual characteristics that it is often valued for). As Matt's answer already covers, some rift-sawn planks will effectively be quarter-sawn wood, but not all. So strength (and stability) of rift-sawn wood can be highly variable.

Warning: Depending who you mean by rift-sawn it can also mean quarter-sawn. In this question it was understood that modern quarter-sawn wood is what you are describing. I am going to refer to quarter-sawn from here.

Unless your wood stock is from a twig I would guess that the wood you end up with will have the grain of Quarter-Sawn anyway because of its size. This is of course assuming the length of the wand is perpendicular to the grain.... which you would want (I refer you to Graphus' answer for a visual representation of my meaning). This type of wood is favoured by furniture makers as it is less likely to warp.

For a wood to be Quarter-Sawn it has to average 60 degree to 90 degree in grain direction. With a wood diameter that small you should get that (Again I refer you to Graphus' answer for a visual representation).

We have not discussed wood selection yet and that is harder to answer since I do not know your location but oak, hickory, elm and white ash would be good choices to consider. They are primary choices for tool handles and I think would fit well here.

Another question here covers some simple methods in making wands if you were so inclined. Part of me feels you are having it made for you but good information none the less.

The two most important things I would avoid when choosing wood, especially for this project, is avoid the pith and, in general, knotting wood. Using either is asking for a premature break. Like if the knot was to cross the entire diameter of the wand.

To answer your title question Does the cut of wood matter?, unless the wand is going to be used by the 2- to 4-year-old set to beat on everything in sight, I don't think that the strength or cut of wood is going to matter in the least so long as you go beyond small twig size in diameter. If this is being made as a keepsake for someone it will, most likely, sit on a shelf and be played with on occasion.

My daughter has several manufactured (plastic/resin) "Harry Potter" wands which sit in their closed boxes, and she'll get them out once or twice a year to fiddle with them for a few minutes. Granted, she's 18 now, so not quite as fanatical as when she was 12, but even when she was younger, the handling was gentle, as she viewed them more as a collector's item/keepsake than an actual toy.

Even if it's being made for LARP use, that would likely involve older people (beyond the 2- to 4-year-old set) who would likely take care in the use of the wand, and wouldn't throw it, beat on people, rocks, or trees, with it, etc.

I'm posting as an answer to this question in particular, but I feel it applies to all of your I'm having a wand made questions.

Not the answer you're looking for? Browse other questions tagged cutting rift-sawn or ask your own question.

12
What are the different uses for plain sawn (flat sawn), rift sawn, and quarter sawn boards?
9
Is there a better way to make a wand?
6
Why should I avoid using the pith section of quarter sawn lumber?
5
Finish for a wand

16
What are the common cut patterns used to mill a log into boards?
12
What are the different uses for plain sawn (flat sawn), rift sawn, and quarter sawn boards?
12
How can I cut plywood in a straight line on a smaller table saw freehand?
8
What techniques are there to find the optimal wood cutting list for a project?
12
How can I make precise corner or notch cuts on the edge of a board?
4
Easiest way to make 5000 cuts'?
3
Splitting wood even though grain is arced
9
Hitachi electric miter saw leaves a strange, slightly undulating non-square edge
6
Ripping vs Resawing - is there a reason for the difference?
0
How do I ensure that the bottom of my shelf project is level?