How can you make a regular screw into a self tapping screw?

Assuming that it is even possible, how can you take a screw with a normal thread and point and make it into a pseudo self tapping screw?

Screw on the right (assuming its uniform all the way around) would be a normal screw while the one of the left would be self tapping as it has a type-17 point. 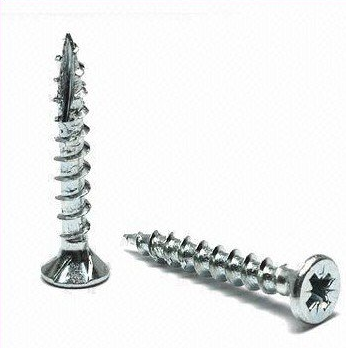 As this would be something that you would be doing to dozens of screws, in theory, the process should be rather simple to repeat.

Any screw can be modified to make it self-tapping and the process is surprisingly easy. All that's required is to create one or more cutting edges and the clearance needed for the swarf, and the existing threading takes care of the rest (just as it does with manufactured self-tapping screws).

The modification necessary can be a very quick operation, literally a few seconds per screw at fastest. Even the slowest method really only requires a modest effort, taking at most a couple of minutes.

This simplest method it to sand or grind the side of the screw; grip your screw in gloved fingers or pliers (pad jaws to prevent crushing the threads) and hold it against a belt sander or grinder until a flat face has been created that is approximately 1/3 of the way up the threads. Ideally it should retain its original point, looking something like this when you're done: 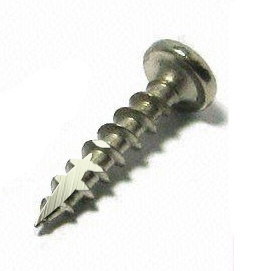 Another method more directly copies the form of commercial self-tapping screws, where you create a groove down the side of the screw somewhat like this: 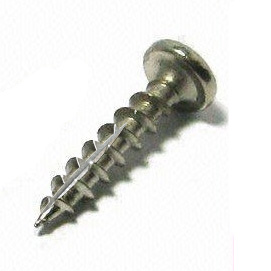 As most screws are made of mild steel this can be done using any common triangular needle or warding file, or a Western saw-sharpening file. For those with a Dremel-type mini drill a cutting disk/slitting disk can be used to do a similar job but care must be taken not to cut too deeply.

Once modified in either of these ways a screw can usually (not always) be driven in and left there as the fastener, without any compromise in holding power. But alternatively the one screw can be used repeatedly, i.e. used as a threading tool. After driving home it can be backed out of the hole and an unmodified screw of the same type driven in its place; so within reason this modification might only need to be done once per screw type for any project.

Note: it is probably best not to try to convert brass screws, it is likely they will not be strong enough to take the strain and they could easily snap in half when being driven into the wood.

As I was pulling together images for this Answer I discovered that, no surprise, this tip is nothing new. Here's a mention of it in Popular Mechanics from November 1923: 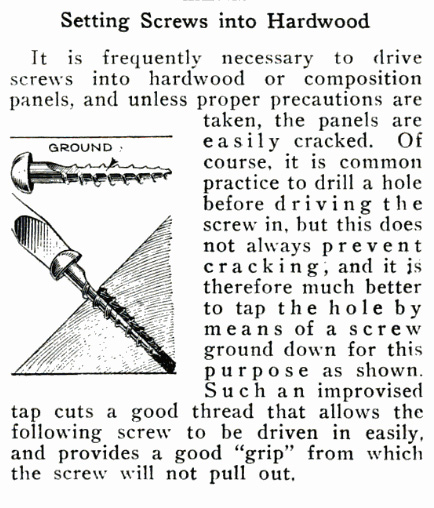 Bonus related point — threading holes
A similar process can actually be used on anything with a thread to allow you to tap a thread in a drilled hole of suitable diameter. This can be done with bolts of course, but just a length of threaded rod (including acme-threaded rod as commonly used in bench vices) can be modified in the same way, to tap wood and other softer materials such as the harder plastics used for some jigs and accessories, as well as aluminium.

Although some modern guides suggest grinding substantial grooves down the length of your bolt/threaded rod, it is far simpler and easier to file, sand or grind 2-4 flats onto the lower portion of the bolt or threaded rod, as in either of these examples: 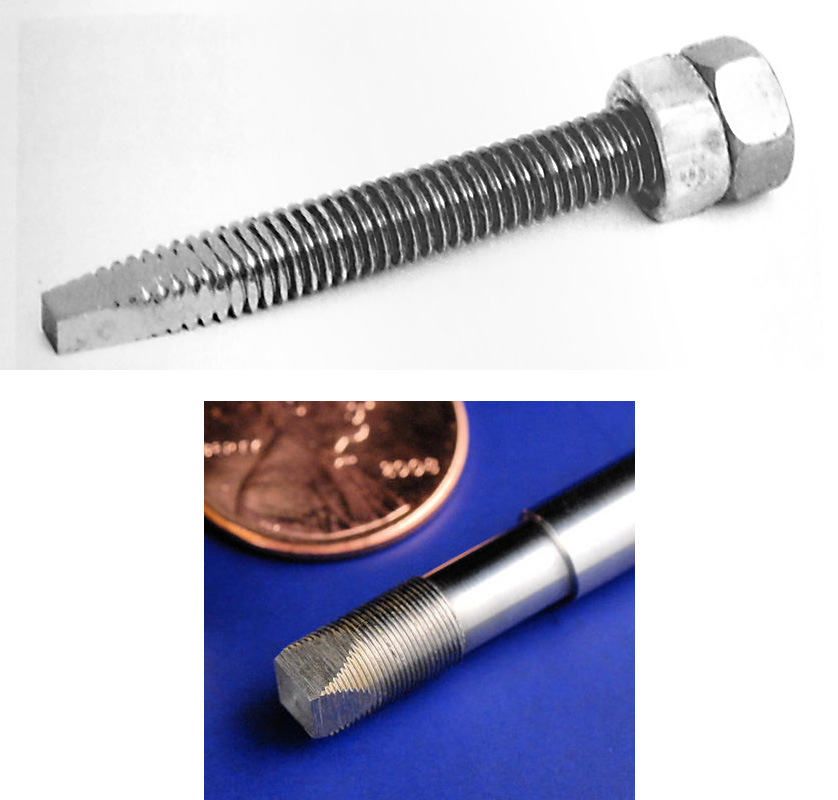 But suppose you're really in a bind. You cannot buy screws because all the stores have closed for the day, it's impractical to pre-drill your holes for whatever reason (I suspect this question is part of your pocket hole birdhouse series), and you need to get the project assembled today.

In that case, you have a few options:

Either way it should only take a few seconds per screw with an angle grinder or bench grinder. It may take a minute or more per screw if all you have is a rotary tool or file.

If I needed to cut many, I might make a jig by drilling a line of holes in a piece of 2x2 or 1x2 (depending on length of screw), cut the piece in half through the perforations on the bandsaw, and put a hinge on one end and a clamp on the other. Flip it open, drop a screw in each groove, then flip it closed and clamp it shut. Then use a grinder as mentioned earlier. I'm not sure this would save any time but it might help get more consistent results.

If you quickly need 1 or 2 self-tappers, try this. Use diagonal cutter pliers to grasp the threads along the length of the screw. Squeeze tightly and you have 2 quick grooves to act as tapping points.
Also, if I am re-assembling a plastic device, electronic etc, the small screws are sometimes too tight for the hole. A quick pinch with the diagonal cutter helps the screw cut the plastic a bit.

I would say you are going into the realm of metal working with this question.

I would also say that having a router bit for metal, and a simple jig to guide the screws are about your best bet, at least for being able to do more than 4 an hour.

EDIT: Matt pointed out an answer from someone else that shows a decently made self tapping screw. It appeared to me that the end was ground down on one side. So if you have a bench top grinder, a snap wrench to told the screw and something to push the end against the wheel (so you don't burn your fingers), you can do a little grinding on the tip, grinding one side flat.

13
What alternatives are there for pocket screws?
8
What size pilot hole should I drill for for a specific size of screw?
11
Can you overwork an impact driver?
5
Considerations when making my own threaded dowel for a vise
2
How can I drill a D-shaped hole to make a custom wood knob for an old stove?
6
Not sure how to successfully drill these pieces
3
How do I align threaded inserts
2
Am I selecting the correct drill bit for this job?
1
How well does metal ACME threaded work with wood holes tapped with ACME threads?

13
How to make proper pilot holes
14
Is this a self-drilling wood screw?
8
Do you need to countersink self-countsink screws
5
Can you identify the screws used in my folding chairs
4
How Can I Attach a Chain to an Eye Hook?
7
How to permanently bond metal screws into wood?
1
Guess How much Weight the table can hold
4
How to screw beer tap into wood without cracking
0
Can I screw in my cable tray into this desk?