I'm looking to replace the blades on our Powermatic Model 60 jointer, and was considering carbide blades.In particular I saw this cutterhead for the Powermatic Number 53, which is a 6 inch vs. the model 60's 8 inch.

Assuming that I can find a helical cutter head that will work for the Model 60:

How does this type of cutter compare to a traditional knife design? In particular I'm concerned with the quality of the cut: it appears as though it might leave a cut that isn't perfectly flat. 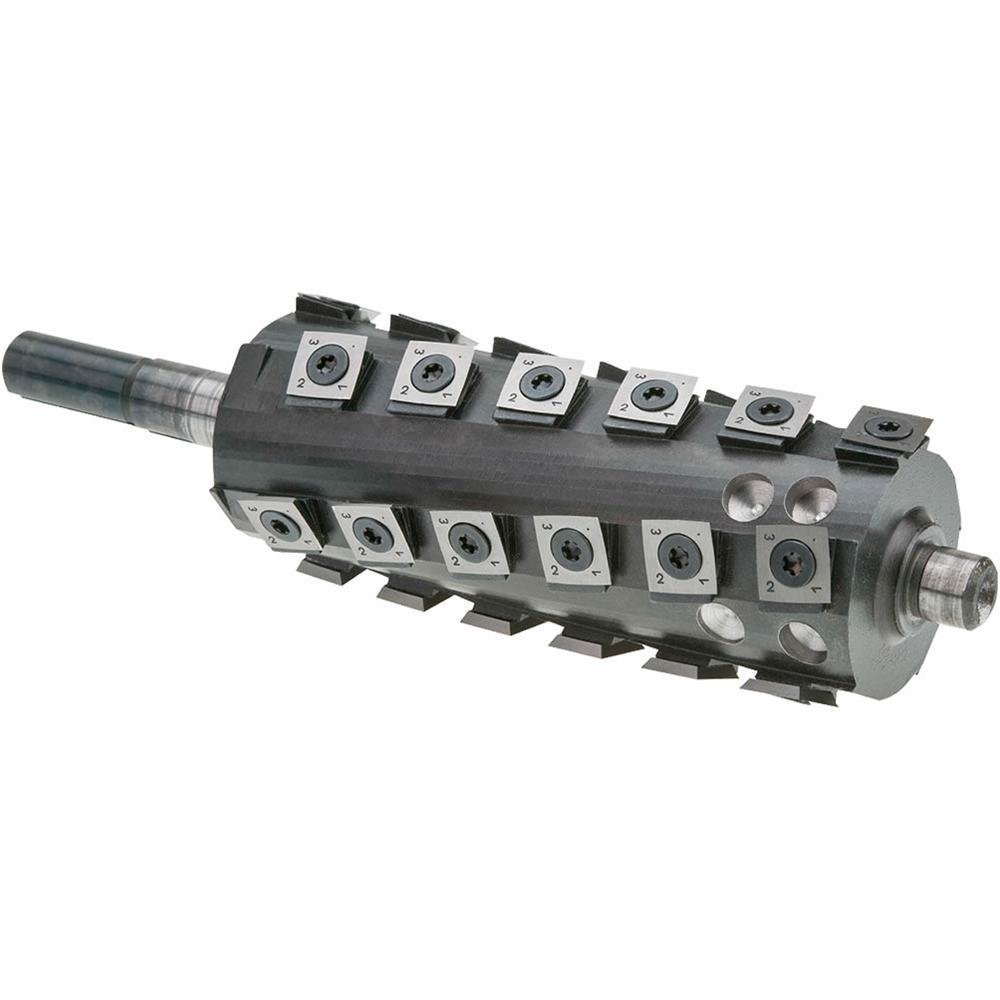 Contrary to popular belief, helical cutterheads--even the widely-acclaimed Byrd Shelix cutterheads--do not produce perfectly smooth cuts. In fact, the surface is ever-so-slightly scalloped, as you will see if you rub chalk on it or apply finish without sanding first. However, it is easy to remove the scallops by sanding, using a card scraper, or with a light pass of hand planing.

There are numerous configurations of segmented cutterheads, from 2-sided segmented knives to 2- or 4-sided square inserts. In addition to the cutter configuration, there are multiple cutter placement/alignment configurations. Byrd's cutter inserts are skewed to follow the helical alignment, producing a shearing cut; and the edges are slightly rounded to prevent gouging due to the cutting/skew angle. Other cutterhead designs align the cutters in either a helical or V arrangement, but typically the entire edge of each cutter slams into the wood at once (as with a straight-knife design), rather than producing a shearing cut.

Contrary to conventional Internet wisdom, side-by-side comparisons have found helical heads to be more demanding on the motor. In the tests, machine fitted with a helical head drew more amperage than an identical machine fitted with a straight-knife cutterhead. The current explanation for this is that a cutter is always engaged with the material, producing a constant load on the motor.

Helical cutter heads are easier to keep sharp: carbide is harder than steel, the teeth can be rotated to a new side three times, and when it's time to replace the teeth you don't have to muck about with adjusting their exact height; that's automatic.

If the head is damaged (e by metal embedded in the wood) you can replace just those teeth.

Helical heads are much quieter than traditional heads, since they're continuously in contact with the board rather than slapping it with a knife three times per rotation. The downside of that continuous contact is continuous load on the motor; you may not be able to take as deep a cut in a single pass.

And helical heads cost more, whether retrofit or original equipment.

So there are some minuses. If you aren't running a lot of stock thru the planer, and it has easily-sharpened or easily-replaced blades, upgrading may not be cost-effective.

Switching over to helical segmented heads can be a bit of a pain -- you've paid for the old head you're no longer using, and you need to disassemble the machine fairly far. If you already have a planer in good condition and don't mind that hassle -- and if an hc head is available for that model! -- replacing the head is worth considering. If you don't feel like wrestling with it, selling the old one and buying one factory-equipped with a helical head is certainly simpler.

A few points in addition to the good ones already posted:

Helical cutter heads are set up to 'slice' material away, hence the cant of the individual cutters as well as the spiral placement.

This leaves a very smooth cut, assuming a good cutter head design (I seem to recall some problems with early chinese made models.)

I've had both, I prefer helical carbide.

While only a partial answer I would still consider it one.

How does this type of cutter compare to a traditional knife design?

The one obvious advantage to the pictured design is that if one of the blades gets nicked or damaged you only have to rotate the one head as supposed replacing or re sharpening the entire blade.

The individual heads are numbered so you know if they were rotated and how many times. This will get much more play time and is most likely designed not to be sharpened but rotated 3 times and then replaced.

Depending on the price your money goes farther with this design.

The cut from these blades can be described from great to leaving scallops or snipes.

Each head is individually calibrated to it is important, even if the unit is new, to ensure that the heads are faced appropriately and the screwed torqued as per manufacturers recommendations. The blades on the heads to appear to be slightly rounded. However the locations of the "rows" do compliment each-other suggesting that a clean cut is more certainly possible. Sanding would remove any minor mistakes (Which should be done with regular blades anyway).

It is possible that the negative reviews of these heads could be linked to poor calibration.

Not the answer you're looking for? Browse other questions tagged tools jointer or ask your own question.

14
How to cut the centre out of a large round of wood
11
What drove the design for the traditional tang?