I'm working on a live edge walnut slab coffee table. This is a photo of the bottom side of the table before any finish is applied sanded to 220 (for reference the holes are for threaded inserts that take a 1/4-20 bolt -- I machined metal legs that mate to the table): 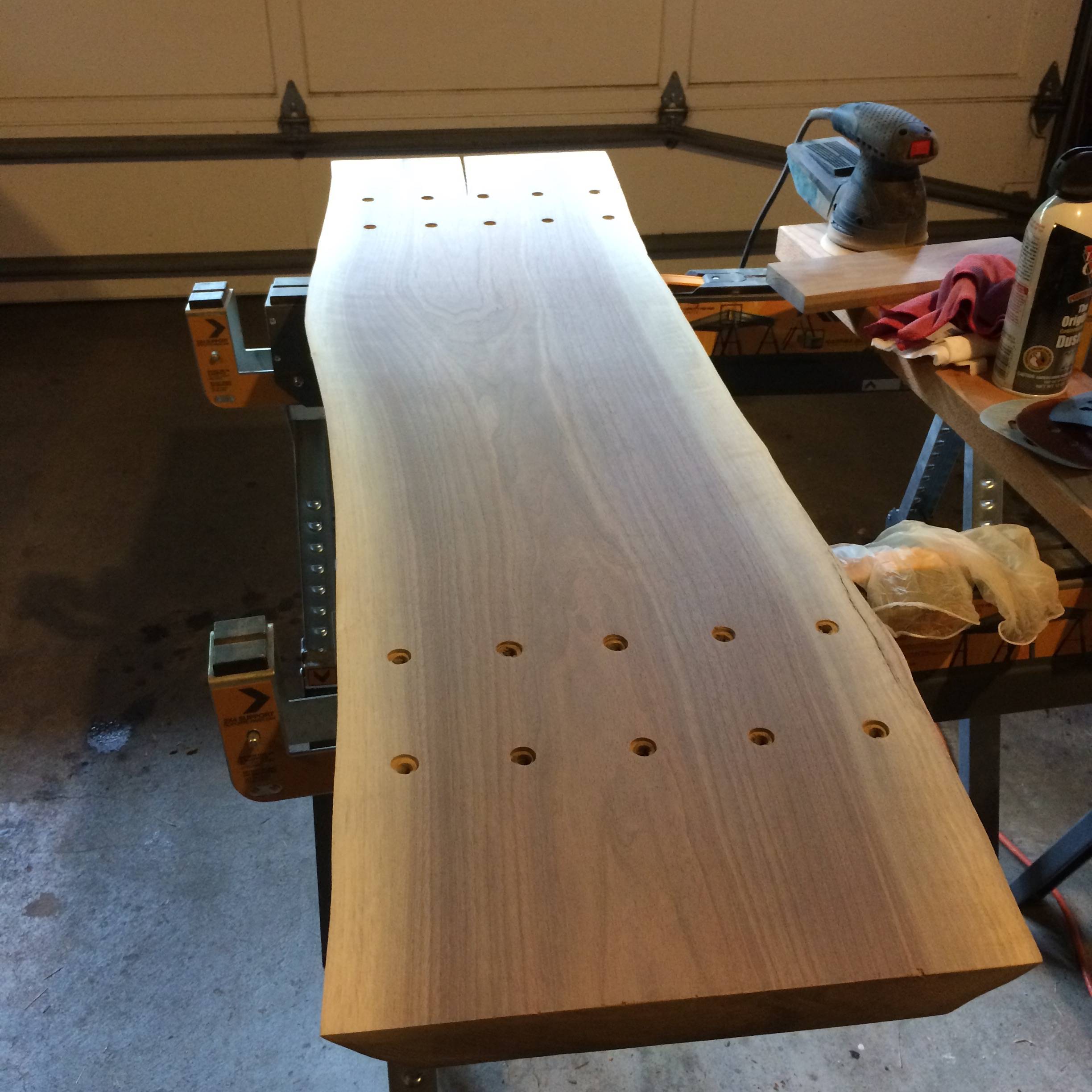 I finished the bottom using Emmet's Good Stuff, which is a gel polyurethane oil based varnish. I applied a few coats, scuff sanded, and then used steel wool to apply some wax. I used some cotton rags to polish the wax by hand: 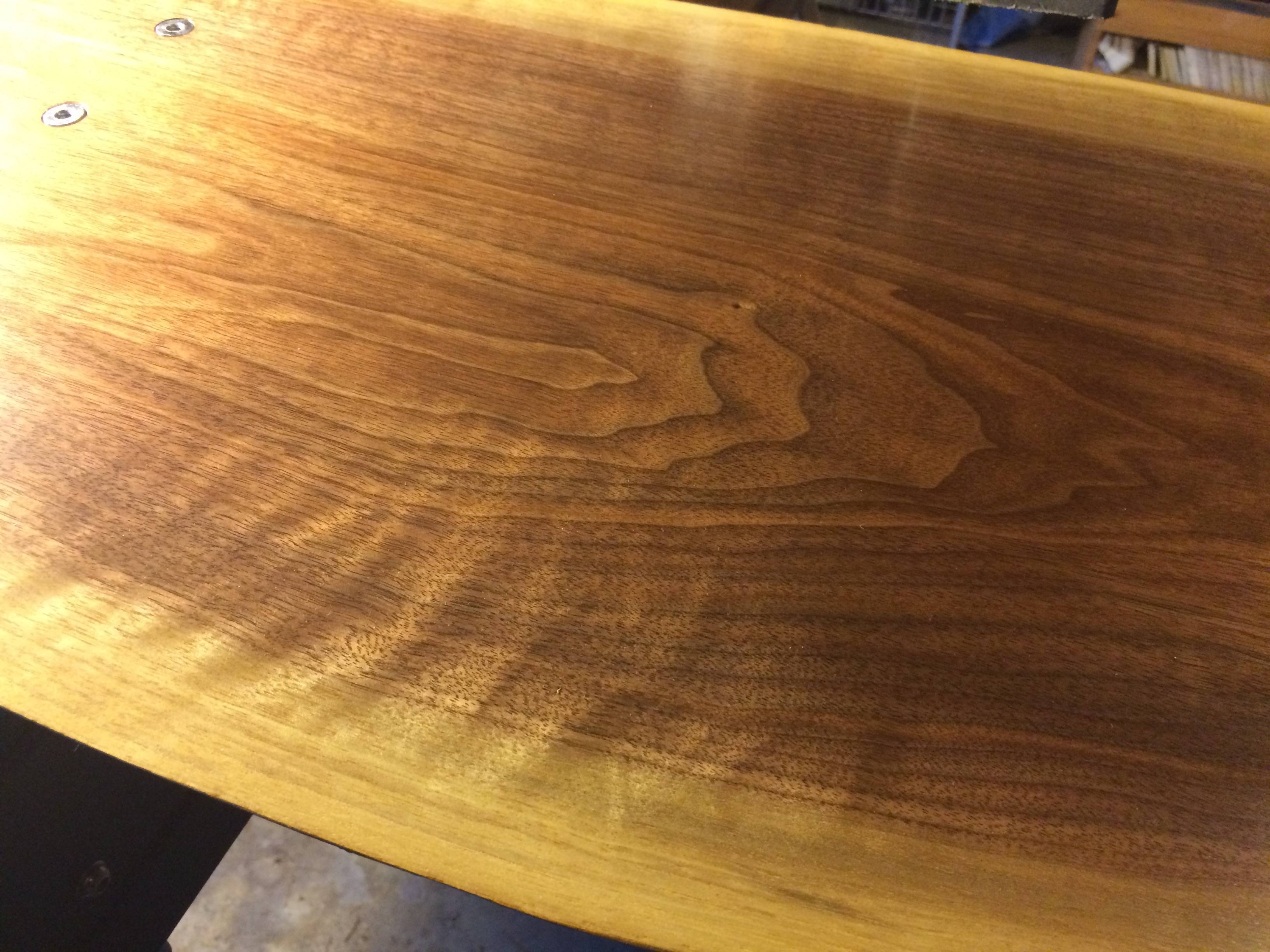 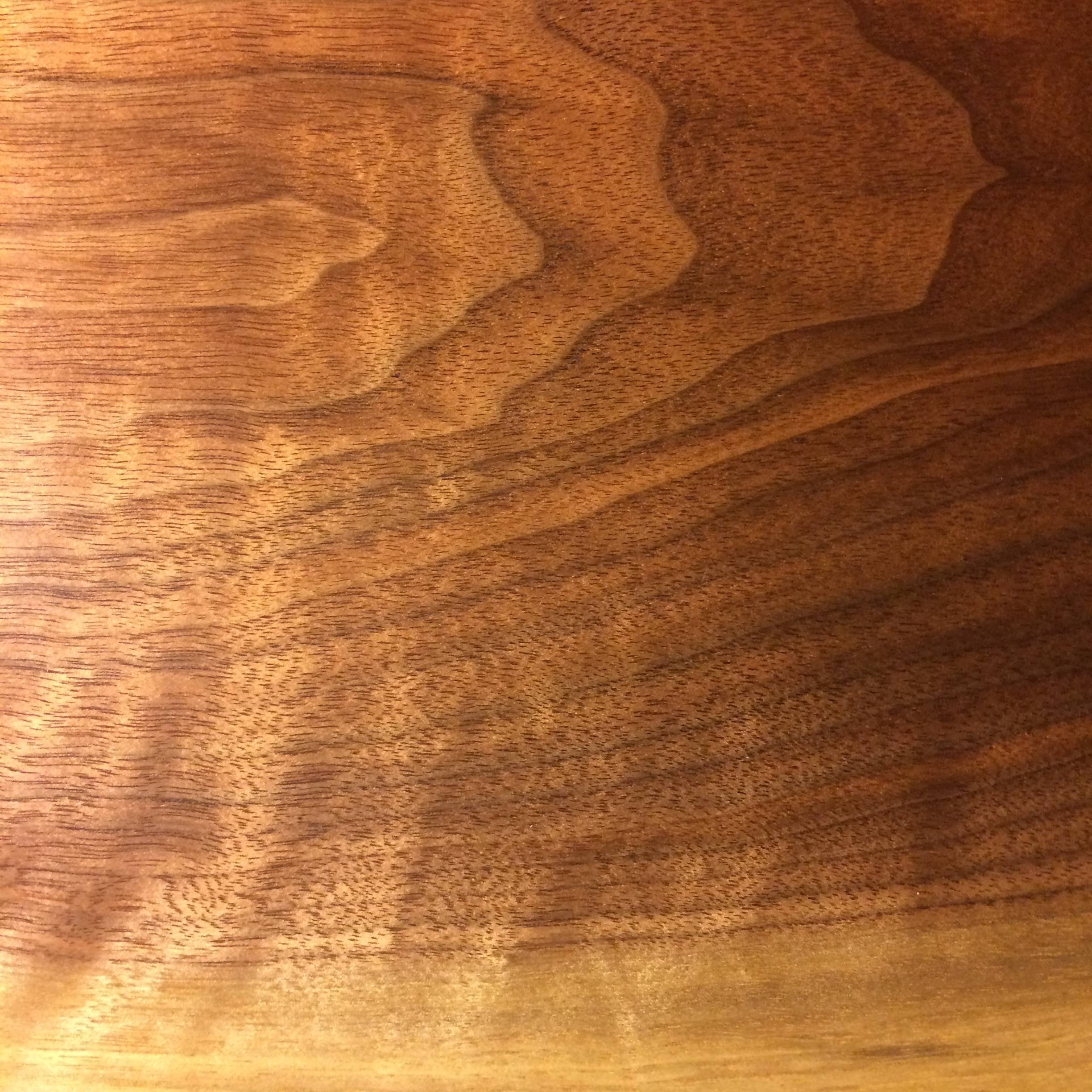 It's pretty hard to capture the grain/reflections with my iphone, but in general I liked the results. That stated I'd like something that pops the grain a bit more on the top side. The Good Stuff contains "synthetic oils" (whatever that means) that do penetrate the wood nicely, but it doesn't have quite the pop I'm looking for. Additionally the color of the wood doesn't quite match, the look I was hoping for seen in examples like:

I'm hoping to get a richer/darker tone in the heartwood while maintaining a nice contrast with the sap wood (it's fine by me if the sap wood darkens up a bit too so long as it maintains that nice contrast seen in the above examples).

I've been reading a ton about finishing and was hoping to get some feedback on the following finishing schedule for this piece:

Any feedback on the above steps, combination thereof, and the proposed reasoning behind them would be helpful. Perhaps there other other better ways to approach this as well. A few notes: I'm doing this in a garage with minimal access to professional equipment so spraying isn't really an option for me. I'm 100% an amateur/hobbyist so super expensive equipment probably isn't realistic (though I do have access to a tool library and would consider investment in low-medium cost tools).

After trying several different permutations I finally finished the table. I ended up making a test board of a piece I cut from the slab:

The combinations I tried were:

I then top coated those with good stuff to see what the final effect would be. 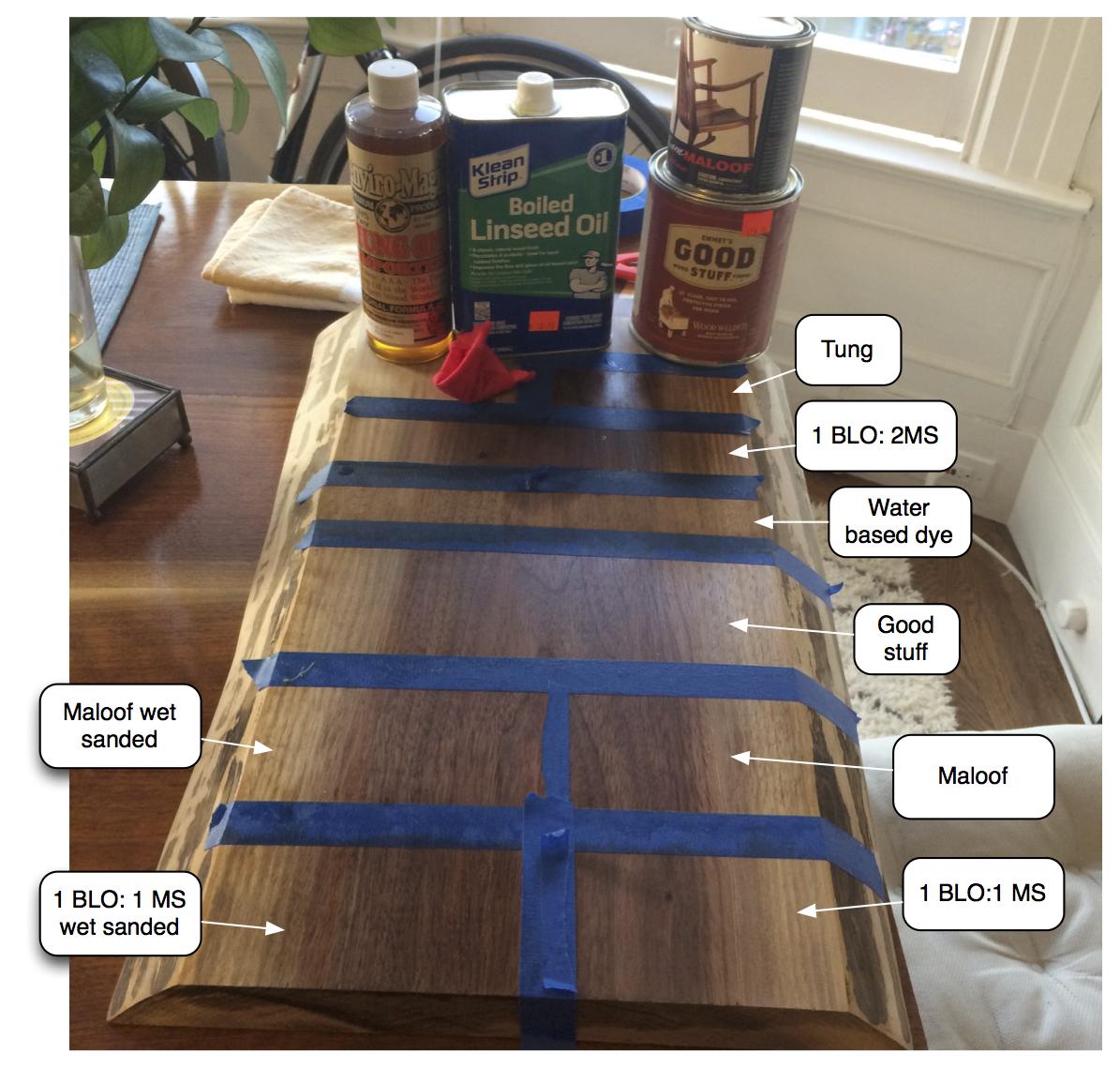 The sample board below shows the work, but it's probably impossible to see any differences given the lighting and iphone camera. Suffice it to say there was a notable difference between all options. How much and who noticed is debatable, but if you looked closely there were lots of differences. All the oil products definitely popped the grain much better than the good stuff. Qualitatively I'd say that BLO darkened the wood (especially the sap wood) more than the tung oil. Interestingly the 2 parts mineral spirits 1 part BLO came out darker than 1 part mineral spirits 1 part BLO. Maybe the mineral spirits thinned it more so that it was able to penetrate deeper? Wet sanding the second coat definitely did something to the pores. I've read in a few places that it's debatable whether this technique actually fills the pores since you're wiping away after a few minutes anyway. In any event those sections' pores were much more visible (e.g. darker) to a degree I didn't like.

The shellac absolutely sanded easier than the good stuff. This was to be expected, but I was shocked at how much smoother of a surface I got from this.

In the end I decided that I liked what the BLO and tung did to the wood. They both popped the grain and made it "richer", but in different ways. Rather than picking/choosing/overthinking it I just mixed 1 part BLO 1 part tung and 2 parts mineral spirits. That way I could tell myself I got the best of both worlds :)

I could have just used the maloof finish, but I didn't see much point of using the poly in the maloof finish since I was going to get a poly top coat from the good stuff anyway. Also though the differences were slight I preferred the pure oil to the maloof.

I did use the dewaxed shellac as a sanding sealer, which I was happy with. I got a much smoother surface than I think I would have if I used the good stuff, but who knows -- I'm sure it's possible to get a very smooth surface with the good stuff as well.

After that I used 4 coats of good stuff removing excess almost immediately. I scuff sanded between coats. Finally I applied neutral liberon black bison wax with steel wool and polished by hand with rags.

I'm really happy with the finished table. I think it looks and feels great. Compared to another larger table I did with just good stuff I think the grain pops a lot more due to the oil. I get a much more "3d" look to the figure. The oils appear to have definitely darkened the wood in a way that I like. The wax finish over the good stuff leaves a really nice smooth surface, which I really like.

Obviously the number one driver for the look of the finished table is the wood itself. That stated I could have probably done anything and it would have turned out nicely, but since I chose this route I'll say it was the best! 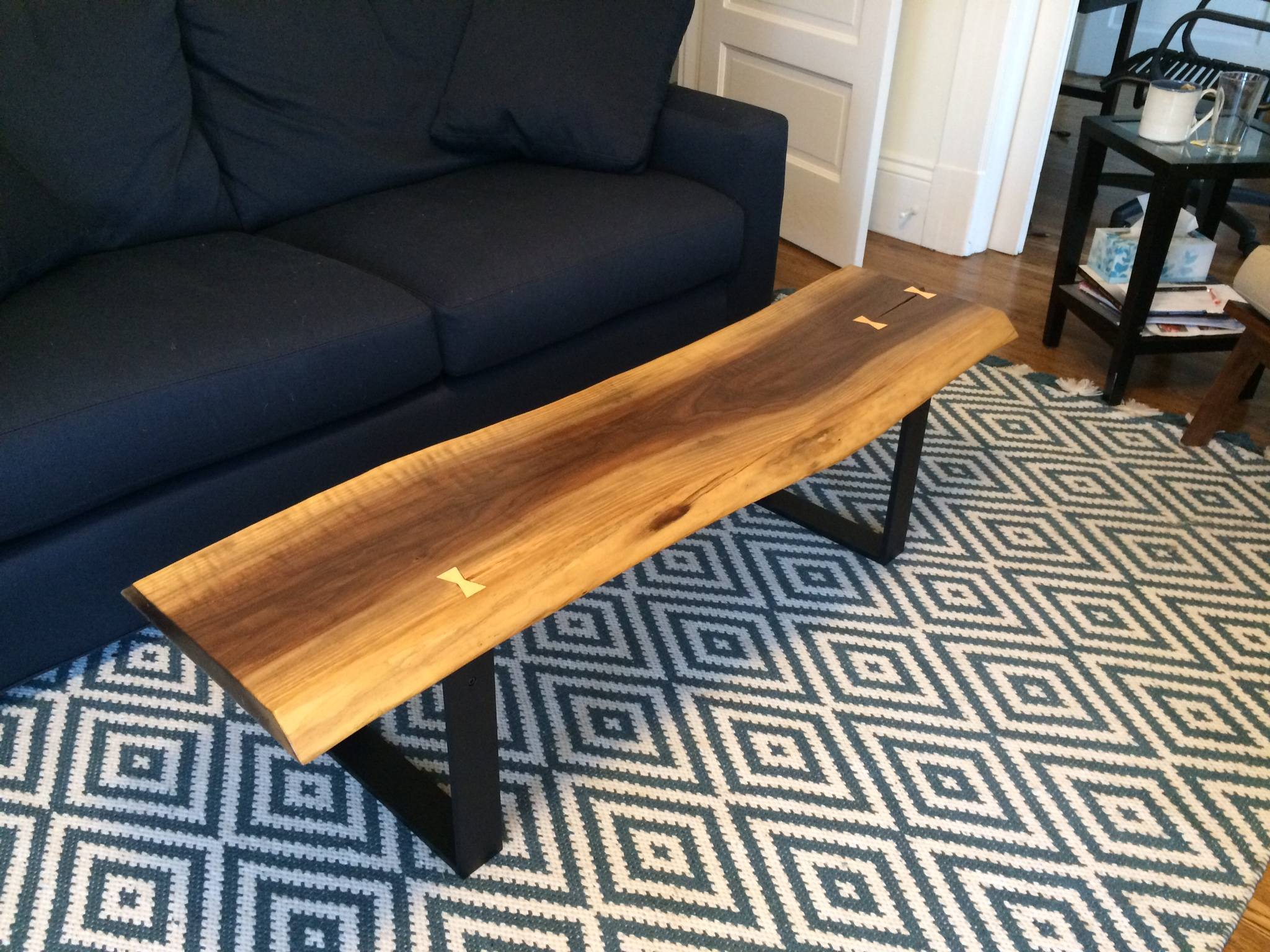 Side point: finishing the undersides of tabletops doesn't appear to be as advantageous as most of us have assumed. Bob Flexner on the subject, Finish Both Sides? Not necessary..

The Good Stuff contains "synthetic oils" (whatever that means)

I would be confused by this too. The only synthetic oils I'm aware of are mineral oils, which as they're non-drying I would presume would not be a desirable additive to any finish intended to dry, particularly not one intended to dry hard or tough.

1-2 coats of oil (either boiled linseed, tung, or something like a danish oil). The idea of this step is to pop the grain

Note: just want to highlight here for anyone who is not aware that so-called Danish oil products are usually not oils. Almost all on the market are a simple mixture of oil, varnish and additional spirits, and then sold at an inflated price to consumers.

As to popping the grain, oils are great at this (so is shellac incidentally, although it won't deepen the tone like you're looking to do).

Whether this will give you a noticeably different look to just The Good Stuff going directly on to the wood I can't say as I haven't used the latter. Ideally you'd want to do some comparisons, but with luck you will get a better result with the BLO than with the poly. BLO excels at this. Even if you don't get a significant improvement you've only wasted a little oil and not much time.

1 coat of dewaxed shellac. The idea here is to provide a sanding sealer, optionally use a darker shellac (maybe amber?) to help darken the wood as well (augmenting step 1), and provide an interface to other finishing products. (perhaps this step is unnecessary if the next step isn't needed?)

Obviously shellac isn't a sanding sealer here unless further sanding will be done.

Regardless if it will, it's still a viable step if you want to do a fast finishing job: you can oil, and then shellac over the top of it without waiting at all for the oil to dry or cure. Then once the shellac has dried (wait about an hour if possible but 15-20 minutes can do it) you can go straight to your first coat of varnish. Using this method you can go from oiling through to 3 coats of varnish in a single day.

I have also tried varnishing directly over still-wet BLO using poly thinned to wiping-varnish consistency (about 1/3 to 1/2 added spirits) and not had any issues with drying. But in this case the second application of varnish usually needs to wait until the following day.

This is entirely up to you. The open-pored look and the filled look each have their fans.

From what I understand I think I'd want to use an oil based pore filler.

Since you've sanded with 220 you're in a good position to make your own pore filler if you're interested, by simply blending the sanding dust with BLO (boiled linseed oil) or varnish. Varnish is a better bet as it dries hard and dries faster, but many traditionalists have used BLO for this and are happy with the performance.

(Maybe I can combine the first three steps into one step by wet sanding the oil and using the slurry as wood filler?)

In general I wouldn't recommend this as it's not the ideal way to fill grain.

However, from the photos it looks like your wood could be a very good candidate for this method. If you go ahead with this step be patient when waiting for the pore filler to harden up. Pause for at least a full day, but it can be worth waiting an additional 24 hours or longer.

Rub out the good stuff with sand paper up to ~1200 grit to get a satin finish.

Rubbing down would be to flatten off. If all you're seeking to do however is knock back the sheen you can do this in a single step, using fine steel wool or something like ScotchBrite. This can be done dry or with wax.

Give Tru-Oil a try, I really really like it on walnut. Pops the grain better than BLO in my opinion. However, for a coffee table, I would top coat it with polyurethane as the tru-oil doesn't protect against water damage all that well.

I too made a test piece for comparison. You can see the results here: http://dannix.net/lib/abode/walnut 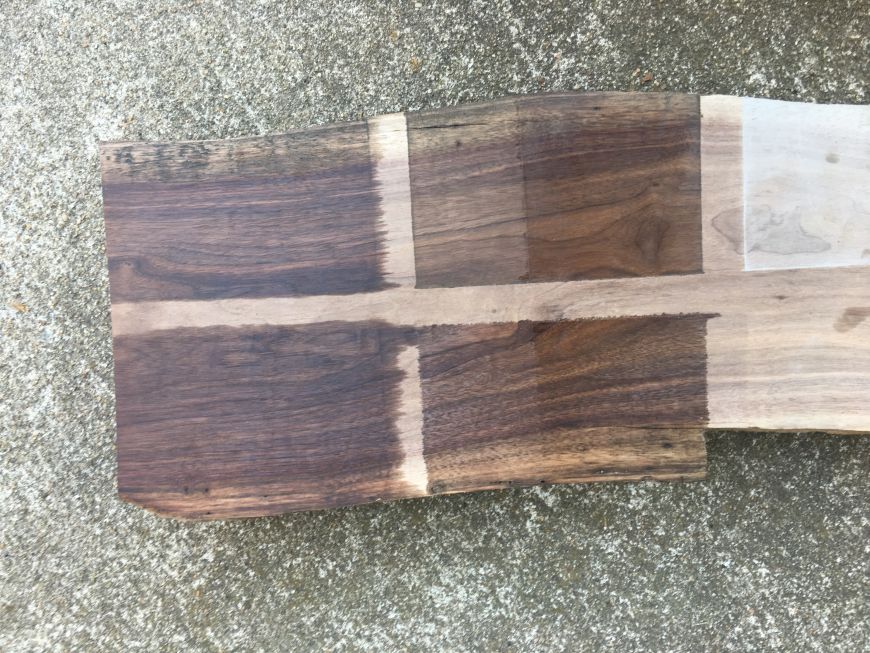 ^^ BLO on the left, tru-oil in the center, bare wood on the right. The top row was applied with rottenwood mixed in which acts as a grain filler while the bottom row was not. Then a second application of BLO and Tru oil was applied for comparison in the right half of each respective square.

12
Can I apply polyurethane over oil before oil cures?

12
Evening reflectivity of a finish after "finishing the finish"
13
Leveling a finish/finishing the finish
10
Applying shellac in high humidity
6
What is the difference between wiping polyurethane and wiping varnish?
2
Getting sanded poly slurry out of wood grains
1
Raw/Pure Tung Oil finish - seeping issues
3
Salvaging Failed Spar Varnish/Danish Oil Finishing Layers on Redwood Live-Edge Slab
1
making shellac darker / tinting shellac
4
How to get an even sheen with wiping varnish?
5
What's the best process for sanding/finishing reactive stained oak floor with hardwax oil to leave the best surface?