How thick do slabs need to be in a slab bench?

My cousin's fiancee is looking to build a bench for their kitchen. From his description, it sounds like what I would call a "slab bench." Just three thick slabs of wood, two for legs and one long one (about 60 inches he said). He hasn't decided on a wood. I recommended hardwood, but in retrospect given the thickness of the slabs, I think it might actually be worth trying in pine.

I told him I would typically use a frame or angle braces to prevent the seat from bowing and to make a rigid connection from the legs to the seat, but if it's a thick enough slab maybe that wouldn't be an issue: Is a 3-4 inch thick slab enough that it won't noticeably bow?

If they were to not use angle braces or a frame (i.e. there are only 3 members, no supporting structure), how should I connect the legs? I thought maybe just a really big mortise and tenon for each leg would do it, but I'm still concerned about it being weak. Should I just tell them to suck it up and reinforce the connections?

edit I've been provided with a reference picture of what he's looking at. It looks like it's just reclaimed 4x4 lumber with a miter, ... maybe biscuits or something as well, but no braces or anything.

Is a 3-4 inch thick slab enough that it won't noticeably bow?

Running the numbers through the Sagulator, a 3" slab of pine (eastern white) 12" deep with a full 60" span (note this would be only if the legs were right at the ends) and an imagined load of 300lb in the centre has an expected total sag of 0.01", which I think most people will agree is acceptable!

how should I connect the legs?

Many viable methods. The simplest would be butt joints obviously, which would actually be surprisingly strong with thick stock and proper grain orientation. Using epoxy, holes could be drilled at various points along both faces of the joint to provide 'keying' and extra glue surface area, adding greatly to an already strong joint (see Notes bottom).

Next up with be a spline joint, the spline either ply or hardwood (with the grain oriented to go across the joint, not along it). The spline should be glued at centre only or entirely floating to allow for movement.

Possibly the best solution would be one of various kinds of housing joint, from through to blind, plain or dovetailed. 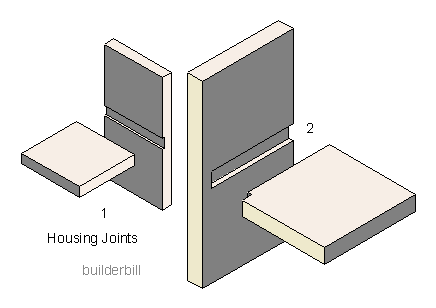 Should I just tell them to suck it up and reinforce the connections?

Reinforcements don't have to be ugly (although many manufactured ones are of course) but perhaps most important: does it matter if they're invisible in day-to-day use? Some people will be bothered knowing they're there, others are more pragmatics and won't care because it doesn't spoil the aesthetics.

Notes
If using epoxy joint faces should not be smooth like with conventional wood glues, rough is good (approximately the level of scratch pattern left by 60 grit paper is fine). Also do not clamp tightly as should be done with other glues, a tight fit and gravity are sufficient for epoxy bonds to end up strong.

The biggest problem you are going to have is racking. With only 3 pieces you will have to joints and any side to side motion will put a lot of stress on those joints.

Putting a back on it to absorb side to side motion would likely be enough.

There is another joint the through mortise and tenon. You put the tenon all the way through the side, (in a wider bench you could have two of them with the first picture on each side. the pin in the picture can also act as a vertical brace and an adornment. The good news here is as it 'loosens' up with use you just take a rubber mallet and pound the shims back in. 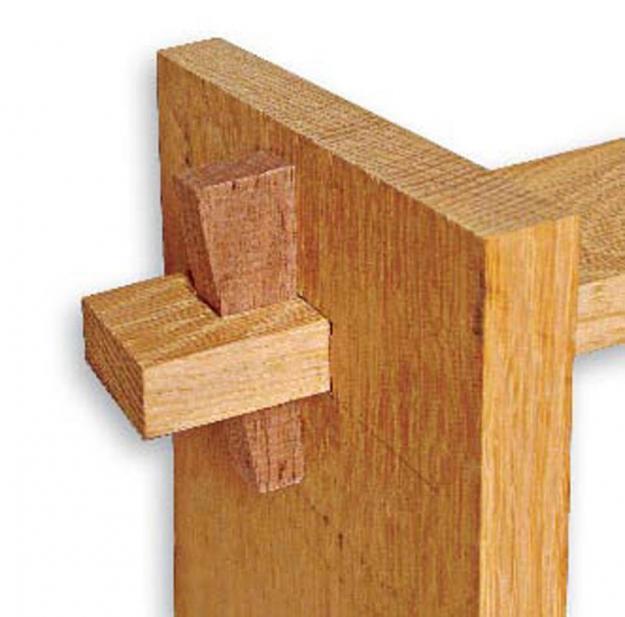 3" board would be plenty of almost any type of wood, hardwoods like white oak or hickory would could probably get away with 1 1/2" - 2" thick. which you could make your own by gluing thinner boards together.

EDT: the picture was added after this answer was given.

Not the answer you're looking for? Browse other questions tagged joinery furniture or ask your own question.

3
Maximum size for an unsupported bench

6
Joints for a 3/4in-thick pentagon
4
How to attach a one inch thick table top to two A shaped frames that are two inches thick
0
How to reinforance purchased sitting bench with 250 load limit to 500 load limit
3
Need help with design of entryway bench joinery
3
How do I fix a wobbly bench?
2
Turned-leg bench: splayed or straight?
1
How thick to make toddler bed slats
1
Wood bench legs are uneven at Christmas but even at Thanksgiving
5
90° notches into side of thick dowel legs
3
Unstable wood bench