I would like to build some crates like those shown in the attached photos (including the Indy crate!) but I am having trouble getting started because I am not great at coming up with plans myself. I'd really appreciate some feedback/help to get me started! 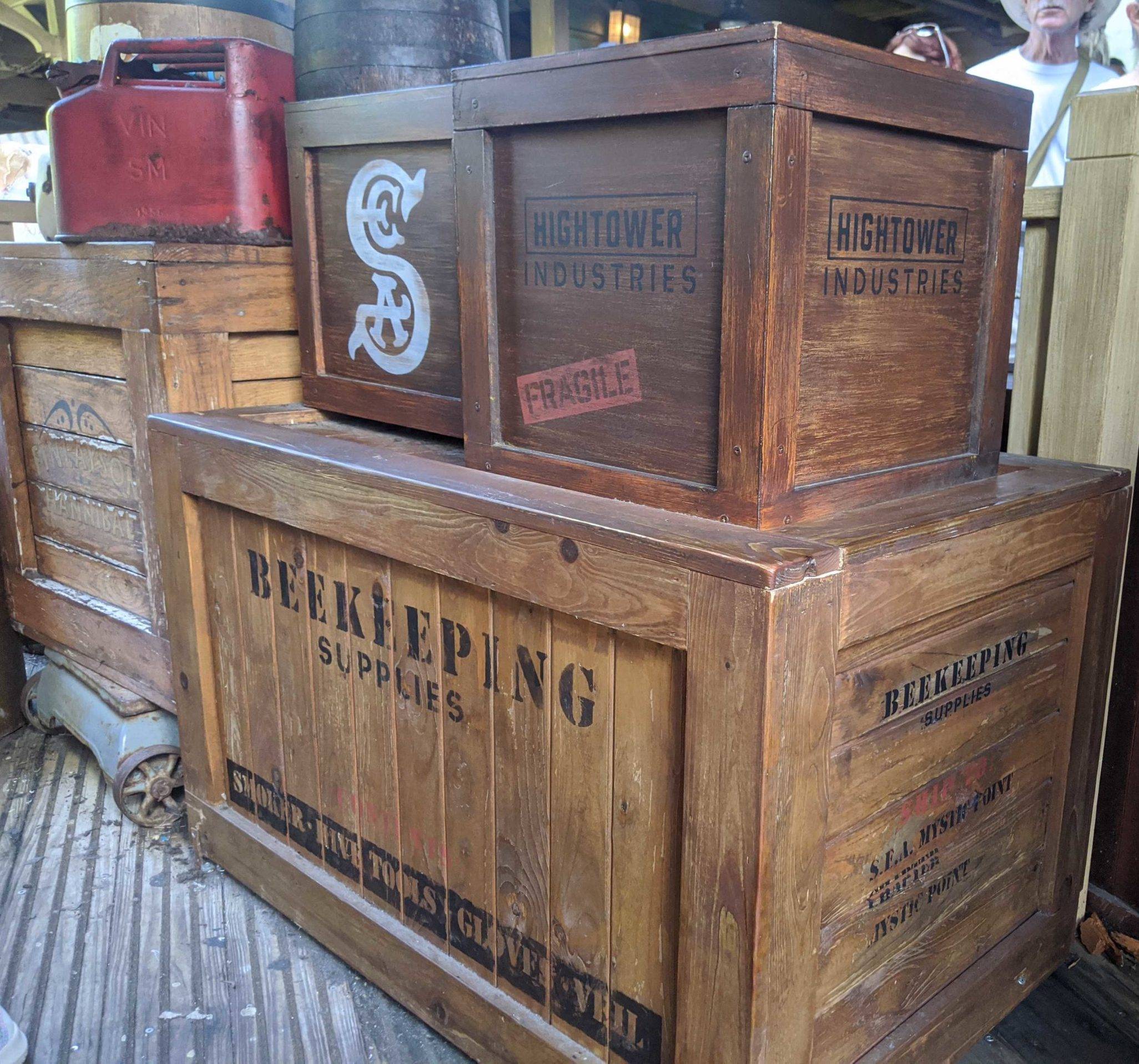 1 ) Building the sides. For most of these crates, each side of the crate seems to have a frame pieces (either the 4 edges in some of the crates, or the 2 pieces on the bigger crate photo), and then the interior slats or solid sheet of wood.

I am guessing that the slats/sides are screwed (or glued I guess) to the visible frame pieces from behind,so that the screws are not visible? It's also possible that the corners are 2x2's/4x4's with dado cuts so that the slats slide into them, instead of being attached from behind.

2 ) Joining the sides. It looks like most of the sides are probably beveled to sit against each other.

Two options that I can think of to join are 1) build an interior structural frame and then just screw each side to it or 2) screw the sides directly to each other. I would prefer #2, but I am not sure how strong that would be. Would really love some help on the best way to do this, or any plans that might exist (I have looked quite a bit, never found anything).

These will be sitting outside on the patio, so they will be exposed to the elements, and maybe sitting in some puddles when it rains. I would like to make them long lasting, so I was thinking I could make them out of wood that is suitable for weather resistance.

When building actual storage/transport boxes or crates the joinery is primarily focussed on strength, with a secondary component of speedy/expedient construction1. Which is why you'd probably never see mitred corners in real-world examples. But since your boxes are for decorative purpose only this doesn't really apply.

Although glued mitres tend to be weak in practice there are numerous ways to reinforce on the inside to increase durability, at the cost of some internal space2. See previous Question, joinery terminolgy for posts in apple boxes / crates for some related insights and tips.

So in short, you can pretty much put them together in any way you can envisage and they'll function just fine.

Frame challenge
Now the above said, I see no reason one would choose to make boxes as in the pictures except to deliberately avoid seeing any end grain. This seems to me a silly aesthetic choice3 of the original maker given the subject being emulated.....

In addition to what are supposedly being mimicked not being this way, it's actually both stronger AND simpler/faster (see first point) to make them the way that actual transport boxes or crates would have been! And because functional boxes/crates tend to be built in a limited number of ways there are abundant references to be found online, rather than the scant or almost non-existent references to building crates as pictured, as you discovered.

These will be sitting outside on the patio, so they will be exposed to the elements, and maybe sitting in some puddles when it rains. I would like to make them long lasting, so I was thinking I could make them out of wood that is suitable for weather resistance.

This may or may not be necessary, depending on just how long you want/expect these to last. But if you want to use naturally rot-resistant species see the list from the FPL in my previous Answer which also has other info relevant to your requirements.

There is currently a complication that needs to be mentioned however, and that is the high cost of wood. Almost all wood has increased in price markedly due to Covid-related production and supply issues. Where only a couple of years ago redwood or WRC might have been reasonable suggestions for something like this it's possible neither is cost-effective now in a lot of locations, or even all across the country.

You'll have to do some investigation into what's affordable where you are right now — there is wide regional variation in what's available, abundant ($) or in high demand locally ($$$), so you could easily end up purchasing wood that someone elsewhere in the country simply couldn't afford for such a project at the present time.

and maybe sitting in some puddles when it rains.

Given this specifically — and again more accurately mimicking the real thing — sacrificial 'runners' or attached feet of some kind would be advisable. These are a feature of lots of transport boxes and crates, as well as traditional tool boxes/chests, to keep the bottom surface dry if placed on wet ground.

Here's Chris Schwarz writing about these in Boarded Tool Chest:

The Rot Strips
The last bit of work on the bottom is to affix the two rot strips to the underside of the bottom boards. There are two (at least) philosophies when it comes to rot strips. One philosophy is to make them from pine and nail them on with iron nails. If these start to rot, they will fall off and you will know it’s time to replace them.
The other philosophy is to make the rot strips from a water-resistant species, attach them with epoxy and brass screws. And then oil and wax them. These rot strips will refuse to rot or soak up water.
Both methods protect the chest from moisture.

1 Hence why dovetailed corners would only be used for the most expensive stuff (despite this being when craftsmen could still hand cut workmanlike dovetails with astonishing rapidity), and why finger joints/box joints only showed up once there were machines available to cut this joint speedily.

2 Quarter-round, triangular or square-section moulding or glue blocks can be glued and/or tacked into the internal corners and they add a substantial amount of strength to a simple corner joint. Note that the "Hightower Industries" box and the one beside it may feature something like this to judge by the screw heads visible.

3 It was considered important only in high-end stuff, or more accurately was. This is an outdated concept now that craftsmen and consumers have embraced exposed joinery as a visible expression of craftsmanship. Hence the modern popularity of dovetails, which used to be primarily a functional not decorative joint — which is why on historical furniture they're principally visible only on the sides of drawers, which spend 99.999% of their lives hidden from view.

Not the answer you're looking for? Browse other questions tagged finishing design wood-selection or ask your own question.

4
How to bind wooden pieces together, but detachable
3
Building a simple table base with these materials?
2
Questions around designing and building an indoor climbing frame
1
What knock down hardware can I use on this platform bed frame?
3
Need help with design of entryway bench joinery
1
Advice about building circular cabinet
0
What is the best way of screwing two boards at the same height and 90 degrees between them over a column?
3
Cost-effective wood selection for outdoor craft project