How to flatten stubborn hollow on the back of a plane iron?

I'm a completely new amateur woodworker, starting out with hand tools. To begin with, I want to get my new tools nice and sharp. I've been trying very hard to flatten (lap?) the back of my plane iron (it's one of these), but there is a triangular region where I can't seem to be able to get rid of the machining marks --- see picture below.

I started with a diamond lapping plate (this one) but progress was very slow so I switched to some coarse silicon carbide paper (120 grit) on a glass lapping plate, but it is still agonisingly slow. After hours at it, I can't truly tell if I'm making any progress at all.

I'm afraid I don't have access to (or space for) any machinery to grind the blade. What can I do?

I've read a bit about the 'ruler trick', I'm a bit reluctant to do it because I don't like the idea of the tiny bevel on the back, but I'll do it if that's the only way!

Please let me know if there is any further information I can provide. 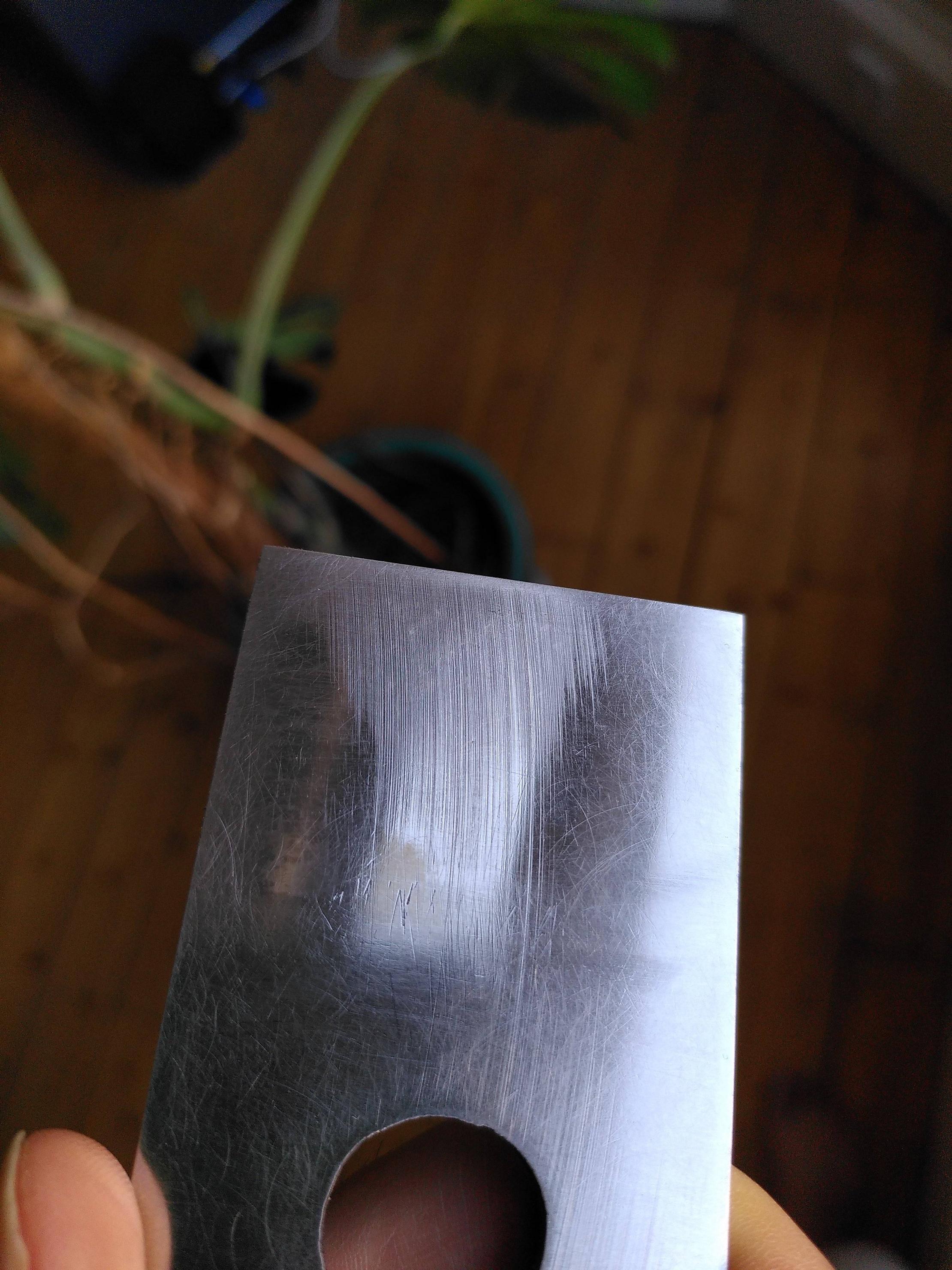 How to flatten stubborn hollow on the back of a plane iron?

You don't have to.

If you alter your strategy here things will go a lot faster. And I mean a lot, something that can otherwise take an hour in the worst cases can be cut to just a few minutes. Or less.

Step 1: coarser surface
You've already done the first thing I would recommend if the initial setup of the back of the iron is going too slowly and that's switching to a coarser surface.

400 grit is way too fine for this job, and frankly it's a silly grit for manufacturers to offer at the coarse end of a progression of grits sold for the maintenance of woodworking tools1.

If the back is already flat it's totally fine to just start at a middling grit, but if you need to address some out-of-flat situation like here it immediately highlights how inadequate it is for the process. Even 250, which a few sets offer, is not ideal. And this despite diamonds being so much more aggressive than almost anything else.

Step 2: concentrate your effort
But THE thing that'll speed this process up is this: ignore most of the back.

The rest of the back of the iron isn't involved in the cutting, only the part right at the cutting edge has anything to do with it. So many people have wasted hours of their lives lapping surfaces flat that have A, no immediate use and B, offering no long-term benefit either!

To briefly describe how I do it:

You're going to be shocked how fast the process goes once you start doing it this way.

Soon as you're done on the 120 you might think you need to go through the progression of grits provided by your plates but you don't. Switch immediately to the finest plate. This might sound crazy but huge jumps in grit have always been normal in honing, people just didn't think of it this way until the modern era with numbered-grit honing stones and the much wider use of sanding in woodworking. Then all of a sudden the thought of proper grit progression (vital in sanding wood) intruded into honing (a totally different process).

I've read a bit about the 'ruler trick', I'm a bit reluctant to do it because I don't like the idea of the tiny bevel on the blade back, but I'll do it if that's the only way!

When I was in your shoes I didn't like the idea of it either. But I've come to realise there's literally no good reason not to use it if you want to. The small and very shallow bevel David Charlesworth's trick produces is absolutely nothing to worry about and shouldn't have bothered me early on.

The significance of the trick that many people missed (me too!) is that it proved beyond a shadow of a doubt that only a very narrow strip near the cutting edge needs to be prepped for an iron to work as needed.

However, I'm not saying you should use it. The method I outlined previously has been dubbed by some the "without a ruler trick" :-) and it has the great advantage that it simplifies honing for you forever more. It doesn't matter if you're ever in another workshop and your 6" rule got left at home, it doesn't matter if you are at home and need to hone right now but the rule is lost in the jumble of shavings at the bottom of your tool well, you can still get your diamond plates out and immediately get going, and have the irons back in the plane and be back to work in less than two minutes once you get practiced.

I would however suggest you file it away for future use in specific situations. It's excellent for example in helping to prep vintage irons that were neglected for many years, as on many a car-boot find :-)

The bevel, when you get to it
When you get to honing the bevel, again, concentrate your effort where it's needed. And this involves totally ignoring the existing bevel. By this I mean you again hone the portion that'll be doing the work and nothing else.

Unless you need to change it (you won't with a new iron2) you literally don't need to touch the ground bevel. This is the primary bevel and in the past it was never touched at the honing stage in Western woodworking. Yet I still see woodworking guru after woodworking guru showing the primary being honed, right before demonstrating to their audience the honing of a secondary bevel which is all that will actually be cutting the wood.....

If you're using a honing guide, set it at 30° and don't look back. If you're freehanding, kudos, just locate the primary bevel on your honing surface (feel for it to sort of click into place), raise the back of the iron a smidge and start honing. The exact angle you hone at isn't important as long as you don't go crazy.

You're done as soon as you've raised a burr (AKA wire edge) on the back, which might take as few as 10 or a dozen strokes with a Rider iron3. Lap the burr off, maybe go back and forth, bevel to back, 1-3 times and you're done unless you are stropping to refine your edge further4.

As a newly minted woodworker you might gain a lot from these previous Q&As that relate to hand planing:
Fettling a hand plane
Different ways to set up a Number 4 bench plane
hand plane controls (bevel down) (this has the numbers you might be seeking for setting the cap iron)
Mouth of a Plane
What is the difference between the jointer blade and the smoothing blade?
What's a quick, easy home-made honing guide?
Recommendation for manual planing and sanding

1 From what I've seen ALL sets are guilty of this, they never go coarse enough.

2 Very likely it is ground to 25° (this has long been the industry standard) and you can leave it at that angle permanently.

3 On softer steel as few as six or seven strokes can be enough. This takes me about 3-4 seconds.

4 Which I highly recommend. No leather required :-)

There is no reason to get the entire back of the blade perfect flat and polished - you only need the area from the cutting edge to just behind the chip breaker. I typically flatten about 3/4 to 1" of the blade back. To focus on that part, you don't really need "the ruler trick" - just hang the rest of the blade off the edge of your stone or sandpaper. If you limit your grinding area to the leading edge, things flatten out a LOT faster.

If the valley is fairly deep, I wouldn't hesitate to go coarser than 120 grit with the sandpaper. I've used grits as coarse as 80 for old plane irons and chisels that needed a lot of work (and old irons often do - they were never ground truly flat in the factory). In extreme cases, I've ground on the flat side of a bench grinder to remove lands on the leading inch or two of a blade.

Not the answer you're looking for? Browse other questions tagged hand-tools plane tool-maintenance or ask your own question.

15
Recommendation for manual planing and sanding
7
How can I tell if leather is vegetable tanned?
6
Fettling a hand plane
7
hand plane controls (bevel down)
7
Mouth of a Plane
4
What's a quick, easy home-made honing guide?
4
Different ways to set up a Number 4 bench plane
1
What is the difference between the jointer blade and the smoothing blade?

6
How do I completely disassemble a hand plane to clean it and then reassemble it?
2
How can I properly sharpen my knives with power tools?
2
Fixing mistake: Filling the gap in a breadboard end on tabletop
6
How to make bottom face of beefy table leg flat and square with sides
2
How can I salvage the ura on my japanese plane blade?
8
Angled cuts without miter saw or miter box?
1
How to preserve sole of transitional plane
3
Best way to cut very soft 4mm (1/8") poplar plywood sheets with hand tools