Let's say your board is 33mm thick, and you want to have two 15mm boards instead (saw is 3mm thick). A friend told me that I have to use a bandsaw for this task but what if you only have a table saw?

The problem is that something (or a very unlucky someone) will have to hold the board using a mere 15mm of the edge. I made the following jig that uses a fine-tooth saw blade to grip the less-than-half of the edge from one side and two screws to hold it from the other. 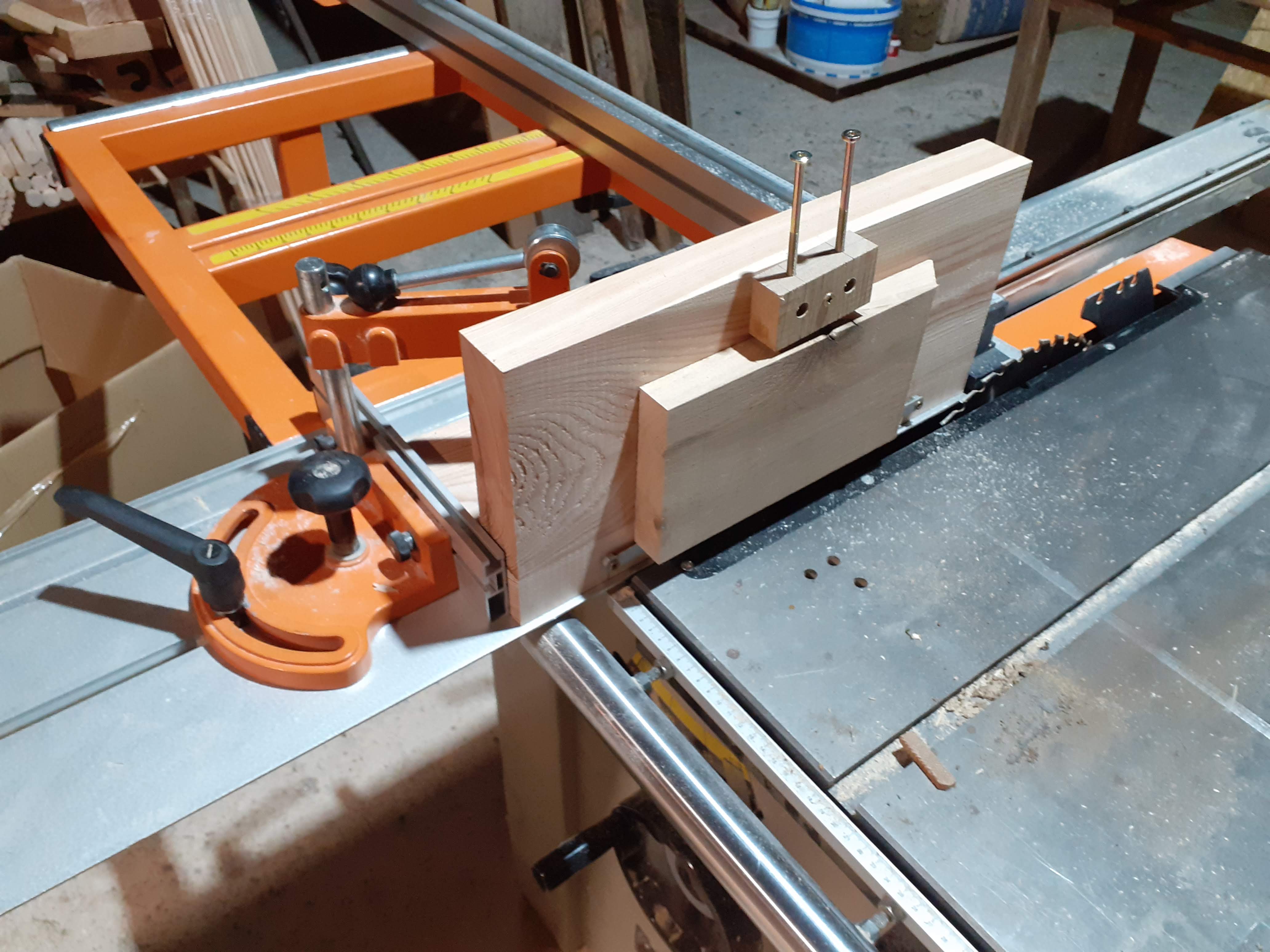 This solution works, but it is obviously not ideal since I have to remove the riving knife. Also, the piece tends to fall down the saw disc opening.

Is there a better solution?

Thank you for the great advice! I will dismantle the jig and use the rip fence with push sticks, zero clearance insert, feather board, and a non-protruding riving knife.

Is there a better solution?

This is one of those cases where it makes more sense to use the rip fence. Your jig essentially re-creates a rip fence on your sliding table, but yours is set up so that the workpiece is fixed to the fence and the whole assembly moves over the blade. The problem of how to hold the workpiece goes away if you use the existing fixed rip fence; the workpiece is supported by the fence, and you slide the workpiece along the fence.

There's a list of tips for doing that safely in my answer to Is it safe to resew on a table saw?.

If you were to continue using the jig you've built (I don't recommend that), you should, at the very least, add a cleat along the back edge. A large component of the force the blade exerts on the piece will be horizontal, pushing the workpiece backward toward you, the user. As is, the only thing resisting that force is the saw blade that holds the bottom of the workpiece. Adding a cleat at the back will at least resist that force and prevent the saw from firing the workpiece back at you.

A friend told me that I have to use a bandsaw for this task but what if you only have a table saw?

Bandsawing has become the go-to method for resawing in modern times, and purpose-made blades are available for resawing. The bandsaw offers numerous advantages for the task: pressure is downwards, into the table, so there's no chance of kickback throwing the wood at the operator; cut depth can be large to very large; the kerf of bandsaw blades is significantly narrower than that of most rotary saw blades so you waste less wood1.

But not everyone has a bandsaw of course and those who own a table saw will eventually consider doing it on that. As a result there is a lot of guidance to be found online on resawing on the table saw.

Here are what I consider the basics in bullet-point form:

To echo a point made above in the Comments, you'll have no difficulty finding people resawing on the table saw who aren't following some or many these guidelines :-(

Some links for further info and to see the process in action.

Resawing at the Tablesaw; It’s often the perfect tool for the job on Woodcraft Magazine's site (PDF).
Use your table saw instead of resawing with your bandsaw on WWGOA website.
Resawing on the Table Saw from Tage Frid Teaches Woodworking, vol 1.

On YouTube:
Safest way to Resaw on a Tablesaw by A Canadian Woodworker.
Resawing On Your SawStop Table Saw from SawStop.

Honourable mention for resawing by hand, at least sometimes
As most guides show, if your board is too wide you need to saw through the 'web' in between the two saw channels. Although paradoxically some use a bandsaw for this the standard way this is shown is to cut it with a hand saw. This gives an entre to doing the whole task manually — with a suitable saw2 it isn't so much effort that you should dismiss doing it that way, except in very hard wood and very wide boards.

Being able to resaw by hand is a useful skill to have for when the table saw it out of action, the power is out and you need to get the job done or you're somewhere where there isn't any electricity. Or maybe you just need to do it quietly so as not to wake the neighbours or family!

See page in Tage Frid's book immediately above the one linked to above for some starter advice on doing this. There is now lots of guidance on this online now with the resurgence in interest in hand-tool woodworking for further tips and tricks if interested.

1 This may not seem that important if splitting e.g. an 8/4 (50mm) board into two and you're happy to get two 3/4" (18mm) boards out of it, but it can be a vital consideration when starting with thin stock and you want the final pieces to be as thick as possible.

2 A Continental frame saw is arguably the best tool for the job, although it can be done with efficiency and accuracy with a traditional English or American rip saw with a low tooth count. Although not made specifically for ripping one of the better modern panel saws with impulse-hardened teeth (e.g the Predators from S&J) can do the job reasonably efficiently and are far easier to acquire, plus they come ready to use and super-sharp.

Not the answer you're looking for? Browse other questions tagged technique table-saw jig resawing or ask your own question.

7
How does one make a perfect circle on a table saw?
29
Is it safe to resaw on a table saw?
6
Table saw technique, cross-cut dados on multiple boards
8
Best wood for table saw cross cut jig
5
Stabilizing thin boards, with trim, vertically on a router table
3
What causes a table saw sled to be uneven on either side of the cut line?
14
How can I make precise corner or notch cuts on the edge of a board?
4
What is the difference between a crosscut sled and a table saw boat?
7
Ripping vs Resawing - is there a reason for the difference?
1
Table Saw Challenge: Making a Sled for a 2' Circle