Are drill guides supposed to be zero-clearance?

I bought the following drill guide so that I can make perpendicular holes in wood. 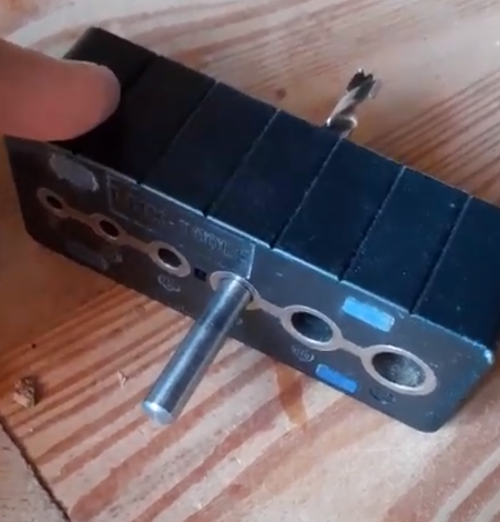 Even using this tool, I failed and I am wondering if the problem is my technique, or if I have bought a faulty piece.

When I insert an 8mm drill into the 8mm hole, there is plenty of space for the drill to move.

I can move the tip of the drill about 2mm along the ruler: 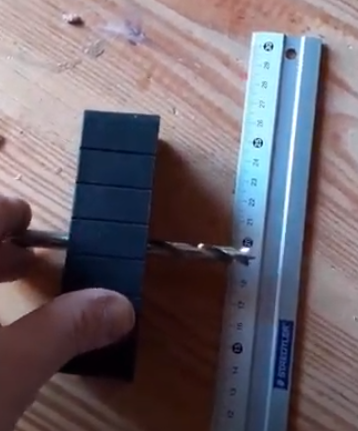 Is this a faulty piece, or were these guides never meant to be zero-clearance?

This could be a manufacturing issue (not necessarily the one you're thinking of, more on that below) or it could be entirely within specs.

With metal bushings the fit must be loose enough you don't get binding on the bit (metal rubbing against metal at high speed, with little or no lubrication, is a bad day waiting to happen) but how much play is going to vary guide to guide1. And bit set to bit set......

It could be the bit
Whatever tolerance the guide happens to have, there's every chance the bit isn't quite the diameter you think it is — at the tip at least. Good drill bits are famous for not being exactly the size they're nominally supposed to be (except on the shaft, where they tend to mic out to just the size you expect)2.

This isn't necessarily a manufacturing defect however, because all drilled holes end up slightly larger than the drill diameter — even in a good drill press, and even when drilling metal — a slightly under-size drill bit could produce holes that are closer to the expected diameter than one might expect.

You can move the tip of the bit that far at that extension. The amount of play right at the exit point will of course be much less than 2mm and I imagine could be within acceptable tolerances for some of the expected uses of such a guide3.

The thing to do is drill a number of test holes in wood using as many matching drill bits as you have for all the holes and see how much off vertical they can tend to be. Then determine if this is acceptable to you for the applications you envisage.

I would also suggest you try holes in a range of woods, at least in one hardwood as well as softwood. You might discover a greater tendency for the entry holes to be slightly off target much more frequently in softwoods than in hardwoods due to the large variation in hardness between the pale and darker grown rings in most softwoods; this often leads to a drilled hole starting poorly, even with a deep awl mark as a starter, and is one of the reasons for the tip mentioned in footnote 3.

1 This occurs with pocket-screw jigs, and a tighter fit of bit to sleeve is a feature of better-made jigs. Note that some of these rely on purpose-made drill bits to provide this fit.

2 With cheap drill bits (and not just ones made in recent years in China!) all bets are off, and you should expect none of them to be precisely the size they're supposed to be. Since getting a digital calipers I've personally measured errors as high as 7% at small sizes and I'm sure there must be worse out there.

3 For example with dowelling, a slight discrepancy in position between paired holes is not just acceptable it's normal enough that there are user tips to account for it, e.g. chamfering the edges of both the dowels and the holes.

Clamping the guide to the work piece is essential to keeping the drilled hole in the correct position. THE GUIDE HOLE MUST BE TIGHT WITH THE SURFACE OF THE WORK PIECE, unlike what the picture shows. A gap allows for movement of the drill bit in the guide hole.

Also when drilling into wood brad point drill bits work better and will not drift across the surface (called a walking drill bit).

Bring the guide to your supply store to fit the drill bit to the guide. You should know you get what you pay for in drill bits so be selective.

Not the answer you're looking for? Browse other questions tagged drilling measurement or ask your own question.

14
How do I drill a hole exactly in the center of a circle?
8
How are vacuum hose sizes measured?
15
Why are keyed drill chucks still available for modern tools?
8
Long travel drill guide
6
How do I fix chuck wobble in my drill press?
4
How do you drill concentric holes of different diameters on a drill press?
1
What is this accessory from a mixed set of drill bits?
2
Are very thin drill bits actually safe?
4
When should I use a tapered drill bit vs straight drill bit for countersinking wood screws?