What is the best way to cut this oak cladding for the best fitting angles?

Hello all thanks for reading my question.

I am a novice(at best) at woodworking and I am currently undertaking the renovation of my stairs. I have successfully cut out the stringers in 6mm MDF oak veneer and glued it over the beat up old one.

I have solid oak pieces that cap over the top of the stringers which have a 6mm grove routed in them on one side to sit flush on the stringer mdf for a nice finish.

So far so good however when it gets to the angle at the top and bottom of the wood I am not sure of the best way to measure, mark and cut the correct angles to have them come together as a mitre and a nice finish as possible as it will be in eye line all the time when using the stairs.

I have an electric mitre saw, however I tried a test cut but had to have the piece longways in the saw to get the angle? and seems very aggressive to cut the edge of the wood and I don't want to splinter the finish or the routed channel so I also have a mitre box and tenon saw.

The problem I'm having is marking the correct angles on the wood and I'm beginning to think the best way to cut it would be by hand and a guide but the mitre box does not allow me to do custom angles only standard 45degree. I also have an adjustable sliding bevel to measure angles but I can't find my protractor - is this required as the adjustable bevel has nothing on it to read angles.(??)

I'm sure it's so simple I'm just confusing myself and I've done a few test cuts that ended up totally backwards.

Thanks for reading this far

There are a multitude of tools that will help you find the angle you're looking for.

From the sliding t-bevel that will simply find an angle and allow you to set your miter box to the same angle: 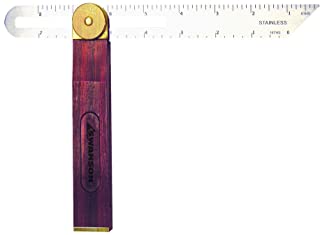 To analog protractors that you could hold against one edge to read the angle of the other: 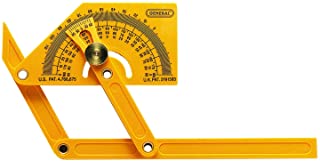 To digital versions of the same: 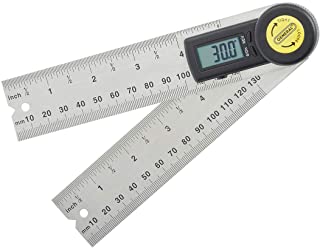 To digital "blocks" that simply read out the tilt angle: 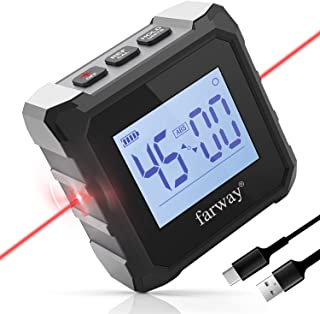 There are even "protractors" that will help you divide the angle in half: 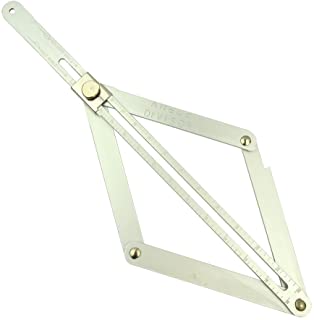 Line up the blades in the angle, read the "half-angle" off the scale in the middle

I have the first three and the last. The one thing they all have in common is that they will get you close on the first try (some closer than others). From there, you'll still have to adjust and tweak to get the final angle exactly right. The older your house, the more adjustment will be necessary.

Since they all require final adjustment and tweaking, you could easily get almost as close on the first try by simply holding the two pieces of wood close together in position on the stairs, eye-balling the dividing angle and drawing a line. You'd be surprised at just how accurate the Mark I Eyeball™ can be with just a little practice.

Get some cheap scraps of pine from somewhere else on this project or a previous project and use those for finding the angle and test fitting. Once you've got the angle figured out, note it on your miter saw's base (either write the number down or, put a piece of masking tape on the scale and draw a line where the marker point is. The mark-on-tape method will be more accurate if you expect to have to cut multiple pieces at different times and reset the saw to 90° for other cuts in the middle.)

To get the miter to fit tightly and have the pieces be the right length, be sure to cut and fit the miters first, then cut the pieces to the proper length. It's much easier to cut a 90° at the other end 3 times to get the length just right than it is to cut 22.735° to get the miter end adjusted. Especially since your saw will have a detente for 90° and you will have to line it up on your mark by eye for the "random" included angle.

To make clean cuts on your powered miter saw, a high tooth-count blade will help. Also, cut slowly so the blade has a chance to cut the wood on the out-bound side instead of tearing it out, and most importantly, put a scrap wood backer block between the piece you want and the saw's fence. This will do the most to support the wood fibers on the "out" side of the cut (where the teeth leave the wood) and help prevent them from splintering off.

If you're cutting small pieces of wood that you don't feel comfortable holding two pieces against the fence, there are a myriad of methods of holding the two pieces together yet still have them be separable after you're done with the cut. I'm sure there are some questions here about that, and if you can't find one, that would be a great subject for a whole new question.

Not the answer you're looking for? Browse other questions tagged technique mitre or ask your own question.

6
How to make a louver vent in a board?
13
How can I cut plywood in a straight line on a smaller table saw freehand?
6
What is an accurate and safe way to piece together wood with a rhombus cross section?
6
Table saw technique, cross-cut dados on multiple boards
6
Cutting tight miter joints for a frame around an existing object
11
Setting precise depth on a table saw with no depth gauge
3
Cutting a 45 degree bevel on all 4 sides of a small piece of wood
0
Why does my blade gets stuck in the wood while cutting?
1
How to maintain a straight cutting angle with a tenon saw?
2
How to cut bevel lengthwise along rafter