I would like to know the best technique to cut a wooden ball into four identical pieces that meet together in the middle. Obviously, cutting it along two perpendicular planes is a solution, but I want something that resembles this: 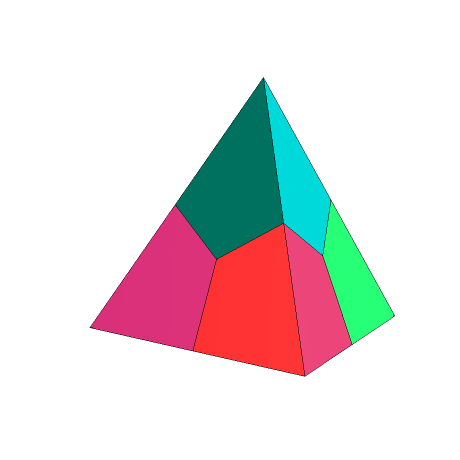 This is done on a tetrahedron, but the idea is the same for the ball: the pieces should meet together in the middle the same way they do on this tetrahedron. Here is an applet I found that allows for 3D manipulation of the tetrahedron, as well as offsetting the four pieces a bit.

I would like to know the cleanest way to do it, as later I'd like to carve little cylindrical holes on each piece to add magnets that hold the thing together, and allow for manipulation. Considering I can do the measurements (and that's easier said than done), how do do the actual cutting? How to know where the blade should stop without going too far in the middle?

Maybe a better solution would be to just double the amount of material and start with a half-ball, that I can then carve to the correct shape? But I can see two issues with that:

This is what I would do:

I would like to know the best technique to cut a wooden ball into four identical pieces that meet together in the middle.

Jan Spurny's solution is a good one, maybe the best way to go if you just want to end up with pieces that can be assembled into a sphere. However, it doesn't solve the problem if you actually want to start with a sphere and end up with a sphere. For that, you need a different approach.

You can solve the first problem by cutting all the way through the sphere rather than trying to only cut partway through. This will leave you with 12 pieces (I think) rather than the four sections you want: each one will have to be glued together from three smaller pieces, but that's really the only practical way to start with a sphere and end up with one.

To solve the second problem, you need to replace the wood that's lost to the saw kerf. If I were going to attempt this project, I'd definitely choose a band saw; of the various common tools, it takes the narrowest kerf by far, and it's well suited to cutting a thick, round object like a sphere. Band saw blades that cut a 0.048" kerf aren't hard to find, and adhesive-backed 0.020" veneer is available. If you can manage to cut your sphere in half cleanly, you can add a layer of veneer to each cut face. Between the veneer and the adhesive, you'll just about make up for the missing wood. (You could skip the veneer if you don't care about the final sphere being exactly a sphere, but I'd worry that errors caused by the kerfs might accumulate.)

Take your sphere and imagine that it's circumscribed about a tetrahedron. Mark the 4 vertices of that tetrahedron on the surface, and then connect each pair of vertices with a line, continuing the lines all the way around the sphere to form four great circles. Those are your cut lines. Before you start cutting, number all the triangles formed on the surface by the intersecting circles and take pictures of both sides of the sphere for later references. Cut the sphere in half along one of those lines; realistically, you're probably going to want to build some sort of jig for holding the sphere securely during each cut. Separate the hemispheres, add the veneer, and put them back together, securing them with some reliable tape around the cut line. Rotate and cut another line, add veneer, and so forth until you finish all four cuts.

Next, you'll need to identify the three parts that make up each section and glue them back together. You should end up with four sections that fit together to make a sphere.

9
cutting board turned green!
9
Cutting a wooden box into 2 pieces, with special shape
1
cutting a circle wider on top than the bottom
4
How to remove a smaller cube from the end of a wooden beam
5
Best way to make cross section pieces out of 12"-18" diameter log
1
Consistent cutting of pencils
0
Cutting a 2mm wide / 3mm deep groove
4
Advice for cutting a thick, wide, poplar board
9
Cutting copper with woodworking saws