Can you apply polyurethane on top of wood that has been treated with a deck sealer?

Note, this is not for exterior use.

We bought an old Buffet and converted it into a vanity for our bathroom remodel. At the time we thought it was a good idea to seal it with a waterproof sealer and selected a deck sealer at Home Depot to accomplish that task.

We have yet to get to the point where we are installing the vanity in the bathroom, but while it has been sitting in the garage, I have noted that the surface is slightly tacky.

I also observed that a separate dresser that we rehabilitated and coated with polyurethane has a smooth glossy finish that is not tacky at all and seems to be waterproof(?). So we would like that on that vanity.

So my question is, Can we put a coat of polyurethane on top of the deck-sealer-treated Vanity? I.e. Will the polyurethane adhere to the vanity? Should we lightly sand it before application? Or is there another way to get the nice smooth glossy non-tacky finish?

As an aside, why would the deck sealer treated vanity be tacky in the first place?

UPDATE: OK, here is the stain and the waterproofing sealer that was used. My wife doesn't remember how many coats she applied. She actually disagrees with me calling it "slightly tacky" and says I should describe it as "if something sets on it awhile, it can very slightly stick to the surface". She says that's not "tacky". 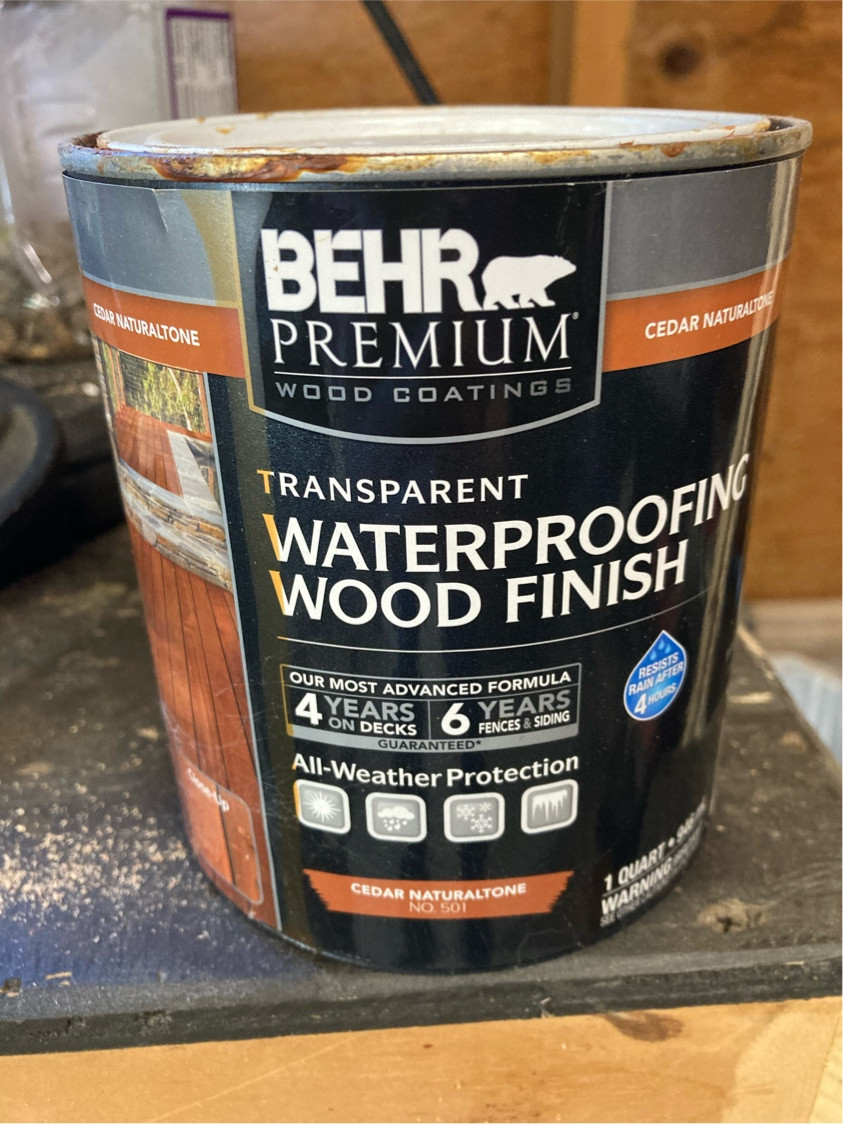 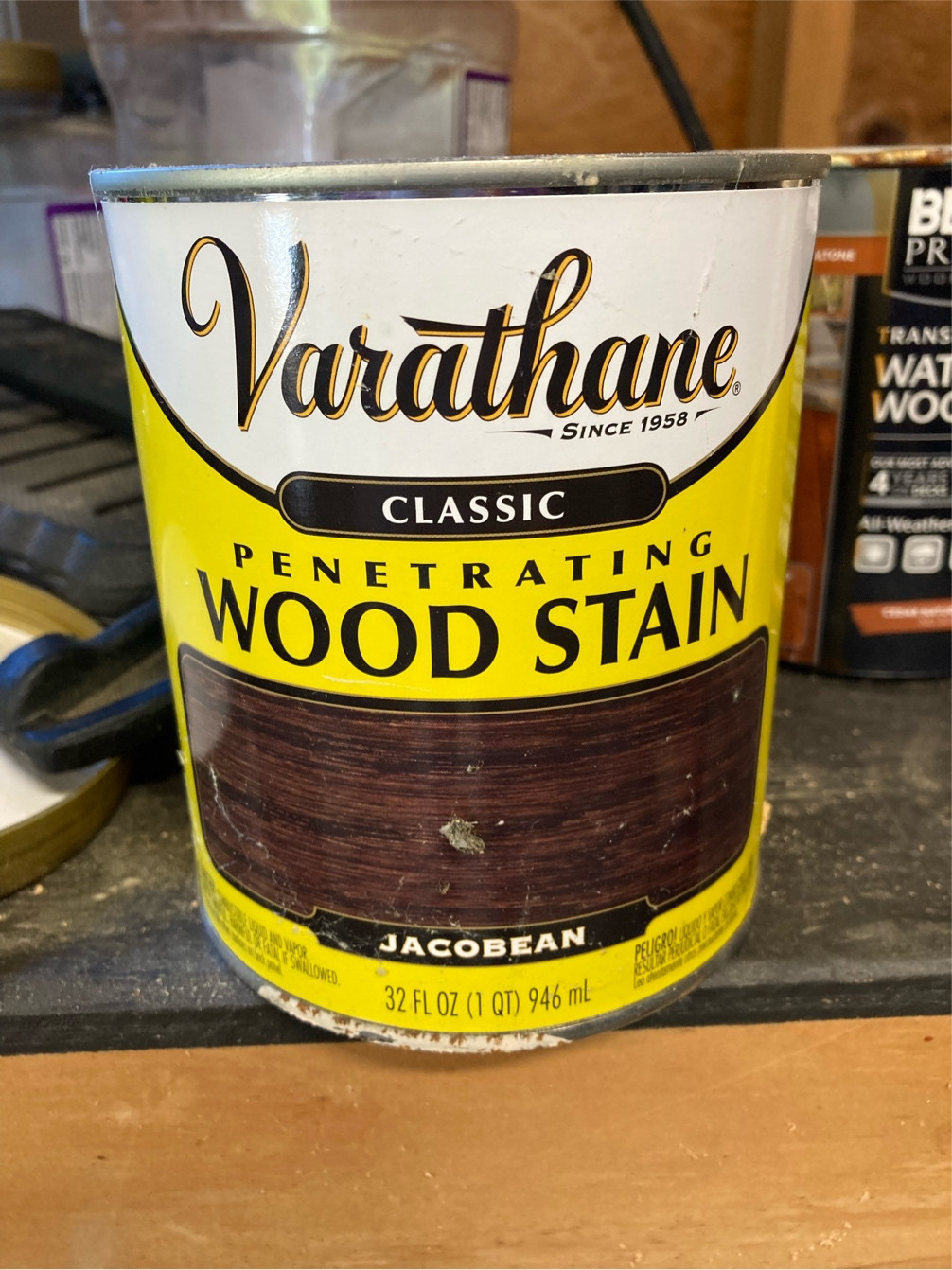 Can you apply polyurethane on top of wood that has been treated with a deck sealer?

In this case, yes.

As noted in the Comments "deck sealer" is a catch-all descriptor for a range of dissimilar products that are just sold to do (roughly) the same job, but not in the same way. Some are penetrating oil finishes akin to "Danish oil"1; some are waxy penetrating finishes; some are film finishes, including the Behr one you used.

Behr's product page for Transparent Waterproofing Wood Finish describes it as a 100% acrylic formulation, so there are no waxes or non-drying oils to worry about that would interfere with bonding of either waterbased or oil-based polyurethane.

You ask in a Comment whether you should lightly sand and the answer is basically yes. See recent Q&A which covers overcoating existing finishes; in short you want the surface clean and matt.

I would be inclined to strip this and begin from scratch, but you don't have to. Stripping is a tedious, messy job that you'll hate doing but I think ultimately it will give you a better result, both visually and endurance-wise.

The good news is you can easily preview your results without incurring any penalty — test the poly on a small area of an inconspicuous or less-critical surface of the vanity, prepped as you will prep the rest of it (i.e. cleaned and lightly scuffed up), and see how it goes.

If it looks good and the poly dries nicely you should be good to go. If unfortunately it doesn't you should strip back and begin again, if you want to use poly.

Another option
Given the deck sealer is made to be so waterproof and the slightly tacky surface is the only real issue you have with it you could just wax it.

Wax increases sheen, improves beading, and it should solve the slight pressure-sensitive tackiness.

I'd recommend using a commercial paste wax here, such as the venerable Johnson Paste Wax, and not a wax-based liquid polish2.

1 So a heavily thinned mixture of oil and varnish with lots of driers added to ensure fast drying.

2 Because the latter may contain oils as well as waxes (making them an inferior product), but may also be formulated with solvents that could attack the acrylic deck sealer.

Not the answer you're looking for? Browse other questions tagged finishing finish-selection polyurethane varnish or ask your own question.

10
How can I protect a desk top made from softer wood?
18
Can I apply water-based polyurethane over an oil based stain?
12
Can I apply polyurethane over oil before oil cures?
4
Is low-formaldehyde plywood important if the wood will be finished with polyurethane?
6
Can I switch from my oil base finish, that still has not dried, to a water based poly?
3
What is the oldest type of wood finish that we know of which can still be used today?
2
Waterproofing Wood With Left Over Polyurethane (Aesthetics irrelevant to project)
2
What kind of finishes can kids safely work with and apply?
0
Can you apply wood conditioner without staining?