Over a decade ago, my father made a breadboard-style kitchen table for my mother and I have since inherited the table. It was his first (and only) table of that style and so the breadboard joinery didn't turn out as well as he hoped.

First, the dowels/pins on the end of the table buckled as the slots in/for the tenons weren't long enough for the seasonal movement. These were shaved down and spot-refinished, but the surface and finish quality around them are poor. We are considering a full sanding/refinish of the table to improve this, and are wondering about fixing a second, more severe issue at the same time.

The second issue, appearing several years later, is that the central portion of the table cracked along its full width. The crack is about 1/8 of an inch wide, and the two sides of it are not at the same level in the center of the table (some twisting/warping of the tabletop perhaps?): 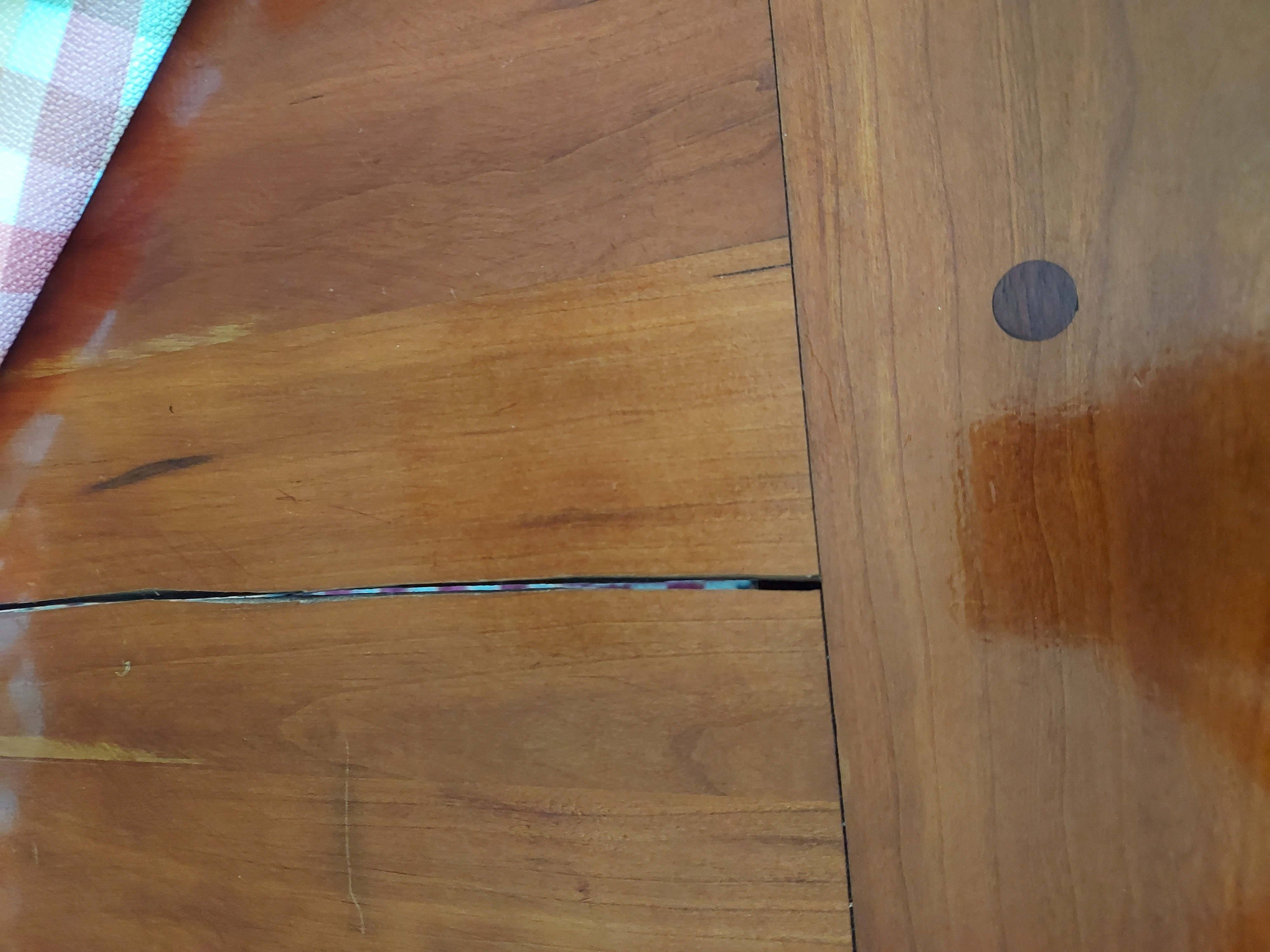 I would like to attempt a repair at this. My naive attempt would involve buying a couple long clamps, and gluing the two halves back together, however I would assume that the table would just tear itself apart again. I would like to avoid trying to disassemble the tabletop by drilling the dowels (although fixing the underlying issues with the joinery would be preferable) as I don't trust myself to not make it worse. Or are we better off with our current solution of having a thick runner over the crack?

I would like to attempt a repair at this. My naive attempt would involve buying a couple long clamps, and gluing the two halves back together, however I would assume that the table would just tear itself apart again.

Yup, your assumption is likely correct.

This cracked because something in the construction was wrong, and glueing the crack closed is just a bandaid unless you solve the underlying cause1. And this is IF it will actually close with clamp pressure, there's no guarantee it will.

As I think you know, the 'breadboard ends' need to be fitted correctly to allow for expansion (and contraction). If some aspect of them is not done correctly2 then it constrains seasonal movement and something has to give; despite the sceptics who think warnings about seasonal movement are exaggerated, even that it's all some kind of myth, at worst you can get a crack as your photo amply illustrates.

I would like to avoid trying to disassemble the tabletop by drilling the dowels (although fixing the underlying issues with the joinery would be preferable) as I don't trust myself to not make it worse.

Unfortunately the thing you want to avoid doing IS the solution, sorry.

If you don't mind losing the length I would suggest just sawing the ends off entirely and be done with them. Full disclosure: I'm not a fan of 'breadboard ends' and don't care for them on tables of any decent width3, but my suggestion is also very much from a practical standpoint.

If the ends were glued on over-enthusiastically they may be impossible to remove without significant damage to them, one or more of the boards that make up the tabletop, or just the tenon(s). Even if the tenon(s) only are damaged this presents a real problem, since it may mean sawing them off and fitting one or more floating tenons, which is not an easy job to do well even if you have the tools necessary. And it must be done well or there's no point.

Far simpler to just saw the ends off and leave them off; simultaneously it almost guarantees that you can separate that crack, clean it (vital!), glue/re-glue it and clamp it back together (using plenty of clamp pressure) with far greater chance of a level result.

We are considering a full sanding/refinish

By all means refinish if you want to (although it's likely it's not absolutely necessary after only 10 or 12 years, varnish jobs usually last a good 2-4 decades) but if you do want to go back to bare wood and start again, strip, don't sand! As I've touched on many times previously here, sanding is basically the worst way to remove previous finish — despite how often you'll see earnest YouTubers doing it! — with almost any other option to be preferred.

If the table were in good condition otherwise I'd have suggested a top-up finishing (coincidentally touched on in a recent Q&A) using wiping varnish, as a faster, lower-effort option. But with this significant structural issue there's a decent chance you will end up going down to bare wood somewhere, and you may need to finish the end grain from scratch, so a full refinish of the top is likely to be needed anyway.

1 Just to be clear, if you glue this well that crack won't open up again (because glue joints are stronger than wood). It'll just crack elsewhere.

2 Too much glue used (i.e. glue applied too far from the centre); slots for the pegs made too short; tenon too thin; tenon just a single, plain projection nearly the full width of the tabletop. Or a combination.

3 Because there seems to be about two weeks in any year when they're the same length as the main field of the table is wide.... blink and you'll miss it :-)

How about building a shim of the appropriate size and color and glue it into the crack? Of course it won't fix the level issue, but it may be "good enough" for your expected result and intended effort

Not the answer you're looking for? Browse other questions tagged joinery wood-repair or ask your own question.

8
Fixing a door's edge properly
7
Best way to make a small detachable ramp on a dog house?
4
Fixing an oversized mortise
3
Wide breadboard tenon length?
1
To Resin or Not To Resin (Cracked Gum Wood)
2
Fixing mistake: Filling the gap in a breadboard end on tabletop
13
How to join at an angle?
3
Remove old oil stains from oak table before refinishing
2
Advice for repairing shaped glass cabinet doors