In a question about routing MDF & HDF, an answer suggested:

when routing conventionally use a second "dust pass"

A "dust pass" is a second (or last) machining pass that removes just a tiny amount of material — sometimes literally producing only dust as the name suggests — to improve surface finish and/or remove burn marks.

In a router context I believe it's most commonly utilised for improving edges when pattern routing and when using a fence, either the fence on a router table or one attached to the router itself. But it can also be done to improve the bottom of a cut, or the surface left after router planing as the following tip mentions. 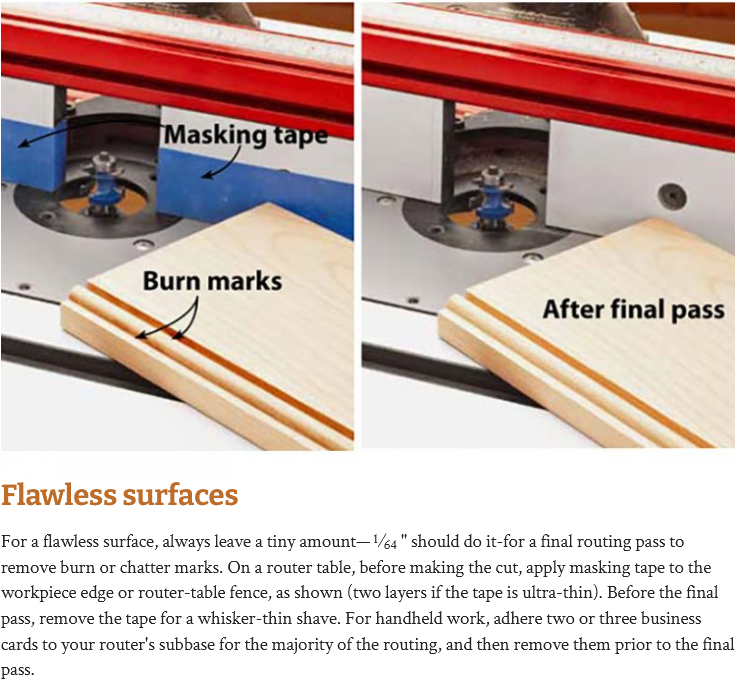 This should probably be done more in routing since it can dramatically reduce the need for sanding, and on occasion may even prevent it entirely.

It's on the table saw1 where this process is used more widely, where it is sometimes referred to a "skim cut" but more commonly a "dust cut". Despite it being more common I only became aware of its use in a table saw context relatively recently; I've been unable to locate the reference, so I suspect it may have been mentioned in passing in a video on YouTube (likely during an episode of Shop Talk Live from Fine Woodworking).

This basic principle is quite widely used in woodworking, very light cuts (and occasionally a succession of them2) being used to give the best surface possible3. Here's a reference to the same idea on a thickness planer:

No-fail Routines for Jointing and Planing on Wood Magazine's site.

1 Although presumably will work equally well on other rotary saws. But bear in mind this is only important if no other process will be used to finalise the sawn surface, such as planing to final length in a shooting board or running a cut edge over the jointer.

Not the answer you're looking for? Browse other questions tagged router terminology or ask your own question.

3
Flattening the face of a board without using a jointer
0
Does HDF require different circular saw blades and routing bits to cut cleanly?

28
Routing boards without burn
11
Router tears wood, leaves streaks
8
How to determine if a router bit is safe to use?
3
What router bit type should I use on screws?
5
Furniture name for waist-high floor-sitting shelf cabinet thing
3
Building new router table by re purposing components of an off shelf router table-need advice
3
Routing a through dado in a small piece of wood
0
Trim router - Arbor has small amount of play along its axis, is this normal? (DWP611)
2
What guidelines should I follow for selecting a bushing for my router bit?