I was 'gifted' this coffee table from my dumpster-diving father and am currently in the process of refinishing it. It's made of some nice, very hard and heavy wood I'm not familiar with; teak or mahogany if I had to guess. Anyways I'm not sure how to attach the legs in a stable manner. As shown in the pictures, the legs previously extended to the table top and were held on with some pocket screws and angle brackets. Any suggestions to attach them more securely while maintaining the size of the table (i.e. not chopping off the ends of the table)? 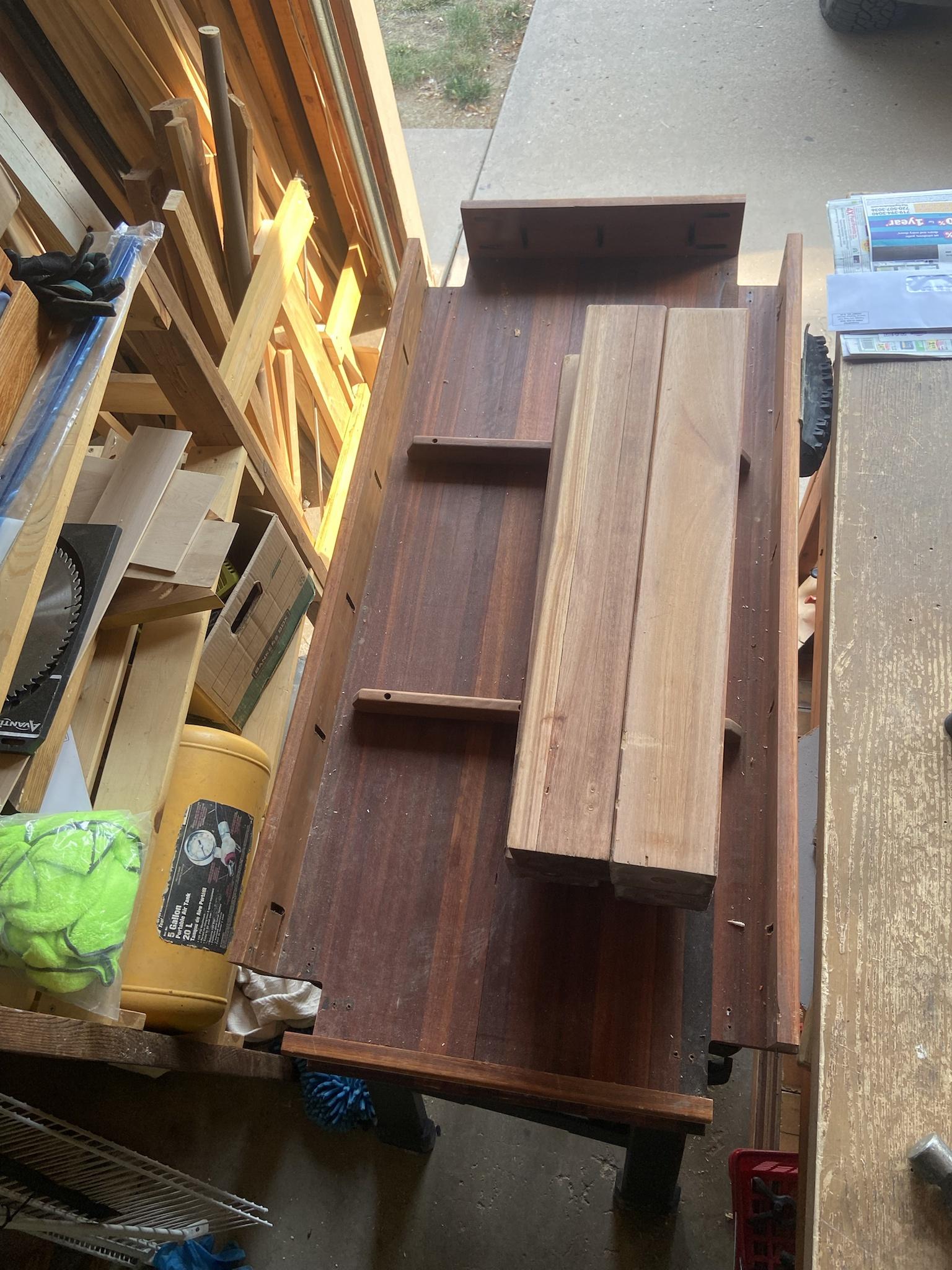 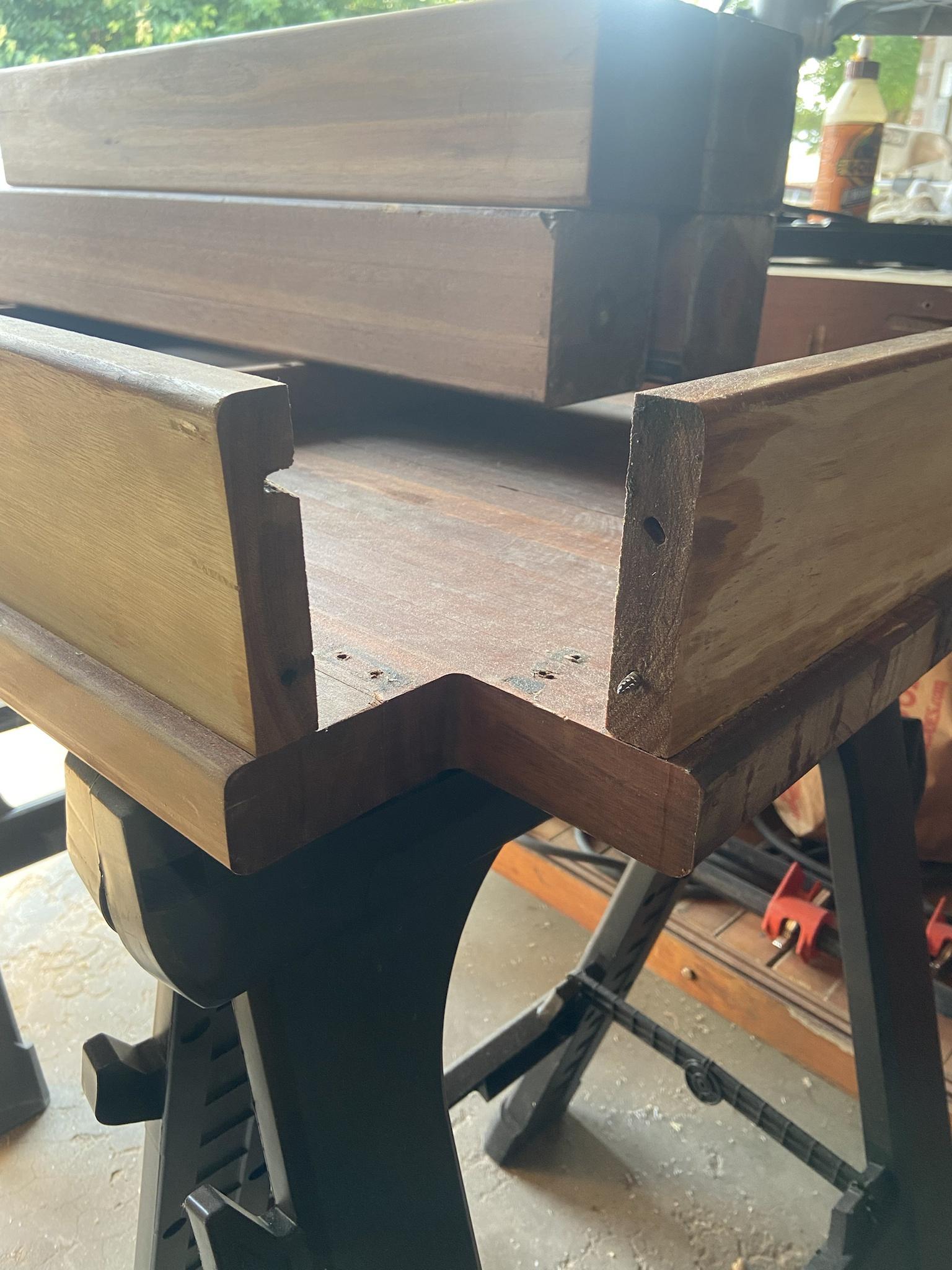 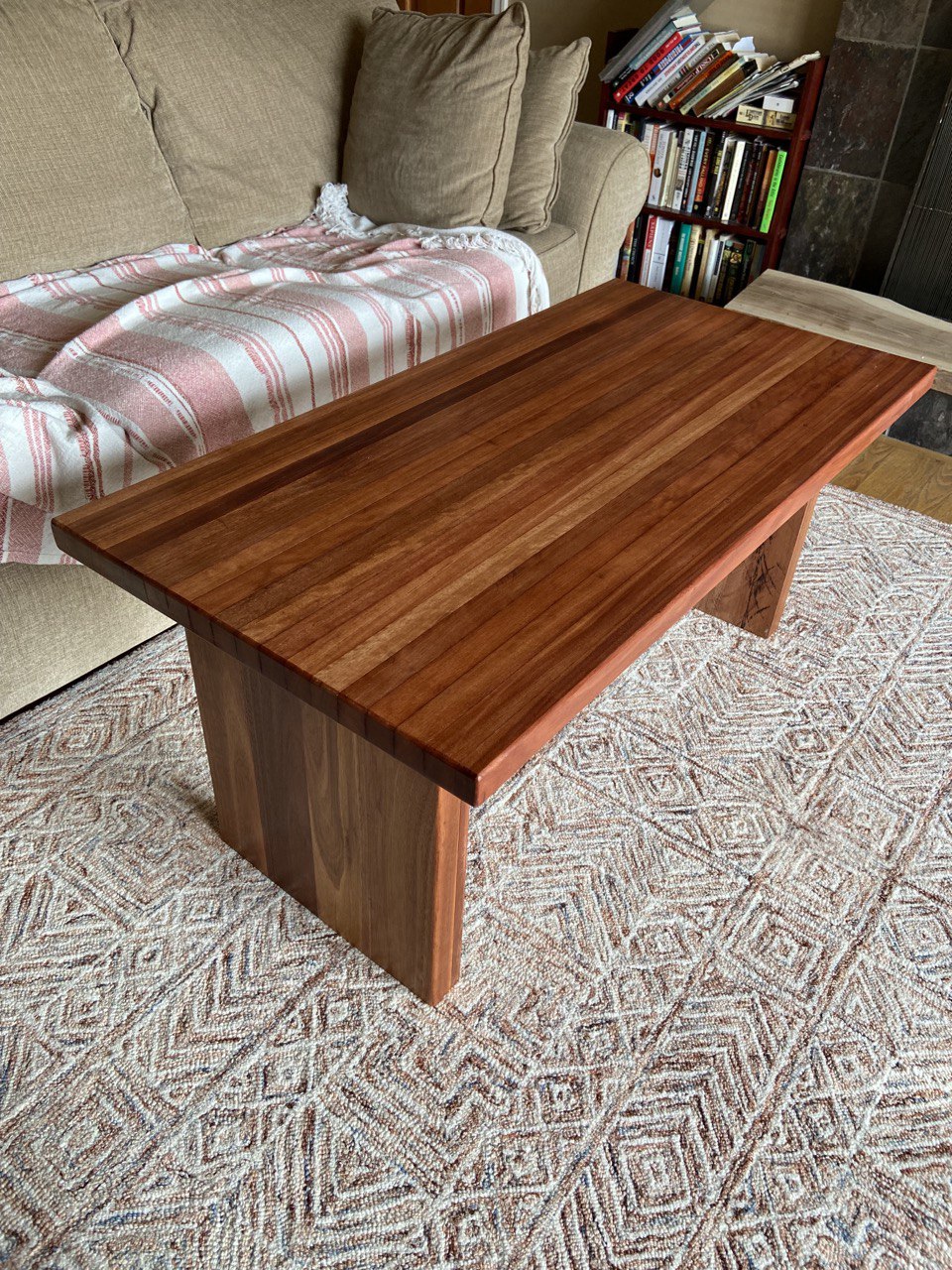 I procrastinated this for quite a while but ended up going a completely different direction from what I was thinking initially. Couldn't find an elegant way to connect the legs with the original style so I flushed up the ends of the table, then made 2 legs from ripping the original 4 in half and joining them together. I then connected it to the table by routing a groove and securing them with some threaded inserts. Finished with some wipe-on poly.

Side note: whatever wood this is (perhaps jarrah or merbau as as suggested)did not play nicely with my respiratory system. Even with wearing a mask, I had nasty allergy symptoms for nearly a week after sanding it.

To maintain current size there are few options.

The existing system we must guess was good enough when the table was new. Perhaps screws got loose and were not tightened? And the pocket screws appear to be short! Because the legs are so thick these screws could be double previous length I think. Deepen pilot holes if you add longer screws.

Unless corner blocks can be made that match compound angles perfectly I think metal brackets are the best option. By using thicker and longer brackets stability would be improved. Maybe doubling up as well? Same type as before but bigger to attach legs to top + another set to screw to stretchers and rails. You must pre-drill for any new screws.

You could pocket screw into the legs through the top. Two screws each side of each leg, so 16 new pocket screws in total. I think this would be strong enough for a coffee table but not sure.

P.S. The wood maybe is merbau. Even if colour was correct I think the table is too new to be teak. And mahogany is very different, not hard and not heavy.

Corner braces like these are a very common way to attach legs. They're attractive for commercial furniture because they create a strong joint that's easy to assemble and disassemble, so you can ship the table with the legs removed. You can buy commercially-made metal ones like the ones in the picture, or make your own with pieces of wood glued and screwed at a 45° angle between adjacent apron pieces. Either way, the leg is connected to the metal or wood bracket via a threaded rod or hanger bolt driven into the corner of the leg, and the nut on the other side of the bracket lets you pull the leg tight to the apron, creating a strong joint that can be tightened if it gets loose over time.

If you go with the metal brackets, you'll need to cut a saw kerf into the inside of the apron. Normally, you'd do that on a table saw while building the table, but you could use an oscillating saw to add that now -- just be careful not to cut too deep and weaken the apron. 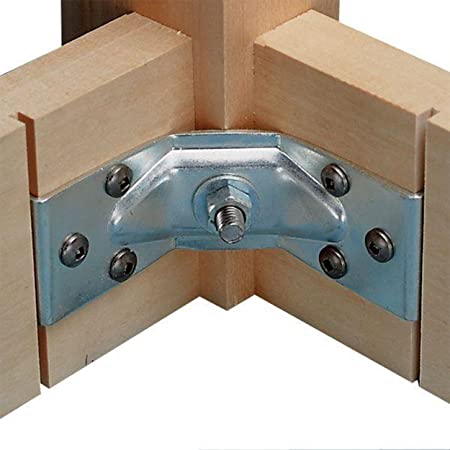 The underlying problem is that the table was built as a tabletop with some legs "stuck on" rather than a solid leg assembly to which a table top was attached.

You could disassemble the tabletop, (in other words, remove the stretchers) and attach the stretchers to the legs using your choice of dowels/dominoes/floating tenons, etc. to build a solid platform. Then properly attach the top to the leg assembly with "figure 8" connectors or Z-brackets or another method that will allow movement between the tabletop and the base of the table. (See: What general considerations do I need to take into account for wood movement?)

Screws and angle brackets can hold nice and tight at first, but will loosen up over time as the wood moves and people interact with the table. Coffee tables can experience more racking and so on than most people realize. People will sit on them eventually.

Seasonal movement in the top added to the pocket screws loosening up over time. First in one direction, then as a result, in the other direction.

My guess is that, once the legs started to loosen up, someone came along and added the angle brackets to bolster the legs. I doubt it was originally built that way.

I don't think that process is going to stop with new screws and thicker brackets but it may result in wood splitting, cracking, or the screws just loosening up again.

Not the answer you're looking for? Browse other questions tagged tabletop stability installation or ask your own question.

19
How can I attach a solid table top to perpendicular cross rails?
7
How to attach table legs to wood that is too thin?
3
How thin is too thin for a large dining table top? Is 11/16" too thin to properly attach to the table base?
4
Best method to attach an edge board to an end-table top board
3
Would 4 post legs work on an 8' x 40" x 1" table?
0
Can these tree tunks be used for a small table?
3
Designing legs for large larch tabletop