With that in mind, can you use 2mm drill bits without the risk of them breaking too frequently? Could it be that below a certain diameter bits would snap too easily?

can you use 2mm drill bits without the risk of them breaking too frequently?

You will break a few — broken drill bits are inevitable for all users drilling in any material — but you might expect the breaks to be spaced by years if you are careful.

Last time I snapped a drill bit while drilling wood was about 18 months ago and I'm sure it was more my fault than the bit's (probably leant too much to one side accidentally after the bit was engaged in the material). The break before that was about a year previously; I remember because it was that break that prompted the purchase of a set of multiple bits in various sizes (10 x 1mm-3mm in half-mil increments) one of which was the bit I snapped 18 months back.

Usage obviously matters1. As does the diameter and quality of the bit — while cheap bits can be decent these days, they're rarely the match of quality bits that cost more (sometimes lots more) not just in straight-from-the-box sharpness but also in material2.

And then of course there's bit type. Do bear in mind that only the lip-and-spur or brad-point type is really a dedicated wood bit. The twist drill design, despite being the most used for smaller holes in wood, is actually designed for drilling metals including mild steel and annealed tool steel. So to a degree woodworking puts a lot less stress on these bits than the design is intended to withstand, IF you clear the flutes3 regularly.

Sharpness is still important even in wood, so resharpening bits that have dulled is important to drilling performance and reduced risk of breakage.

What if you find you break skinny bits too often?
Although they're very much considered obsolete awls can still be used today. In many contexts in woodworking a starter hole is sufficient, and these can be created using a bradawl or birdcage awl just as in the past.

Where you want a deeper hole than is conveniently made with an awl you can make a rudimentary bit by clipping the head off a nail of suitable diameter. This is an old, old trick that gets repeated in different forms down through the years in various books and magazines: 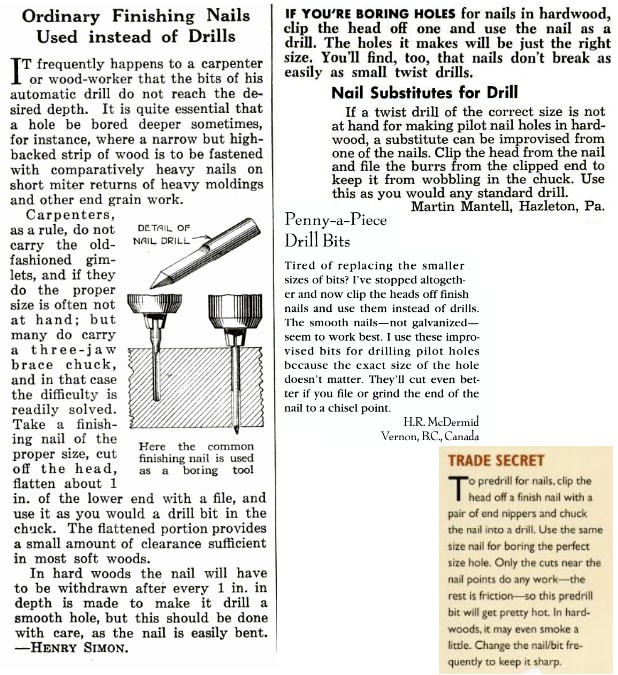 You can use the clipped end as-is to do the drilling, or using a file sharpen it to a chisel tip (like a bradawl) or sharpen the pointed end to a pyramid shape (like a birdcage awl). You'll be surprised at just how well these work, including a much reduced tendency to chip out the entry hole compared to real drill bits! While this type of 'drill' has no flutes of course and therefore no clearance for swarf you can successfully drill holes even in harder hardwoods with these using power drills as well as hand drills of the 'eggbeater' type.

You might like to also investigate some older styles of hand drills, including the gimlets (kiri) used in traditional Japanese woodworking.

Could it be that below a certain diameter these would snap too easily?

Although they do make bits much smaller than this the thinnest ones I've actually used myself were 0.2 or 0.3mm. They were very short as you'd expect, and while I did break one or two (over many years, drilling disparate materials including wood, resin and soft metals) they weren't that fragile that you'd constantly worry about a break, although you were of course on the lookout for it and you had to be careful.

1 The species being drilled, whether you're going into side grain or end grain, drill speed and feed rate, any sideways motion on the bit.

2 HSS for example is not one material but a class of alloys, and better grades of HSS are far stronger than lesser grades.

3 Wood swarf can pack tightly into the flutes of drills in a way that metals can't, because hot wood dust will naturally bind together (even in non-resinous woods, because heated lignin is sticky).

Most US drill indexes go down to 1/16" (1.5875mm). It is best to keep the RPM's high and the feed speed low with those and smaller bits. The use of a drill press is highly recommended. Most smaller drill bits will be intended for working with metal, but will work fine in wood.

Wear safety glasses (always in the shop), and expect to break a few. Most industrial supply stores will sell you quantities of one size. A few years ago I was helping a guy build a model steam engine, and we drilled about 400 #60 (1.016mm) holes in some stainless steel sheeting. We'd average about 50 holes per drill bit before we broke them.

The claims are ridiculous.

In electronics, much smaller holes are drilled in circuit boards, automatically by CNC machines in production.

I have a set of drill bits for that purpose which includes drills 25 mils (0.025") and narrower.

These are used in certain hobbies also, like jewelry making and whatnot.

If properly used , drill bits do not break. Not that I have not broken many myself; be sure to use glasses. As I told my sons ; "anyone can break a wooden shovel handle , the idea is to make a hole and not break the tool". Always keep the bit perpendicular to the work, and you need to check from more than one position. Of the many bits I have broken, a shard never hurt me. So I would say they are safe - wear glasses! I happen to have some very small bits 0.012" ( 0.3 mm). Small bits would not be made and sold if they were not used. Today, I expect many very small holes are made with lasers. And I expect the demand for analogue watches with tiny holes for shafts is all but gone.

Not the answer you're looking for? Browse other questions tagged power-tools drilling or ask your own question.

14
Replacing small drill bits without buying new sets (or preventing breaks)
14
How to cut the centre out of a large round of wood
15
Why are keyed drill chucks still available for modern tools?
1
What is this accessory from a mixed set of drill bits?
6
Are drill guides supposed to be zero-clearance?