Old drill press. How do I remove the handle/quill 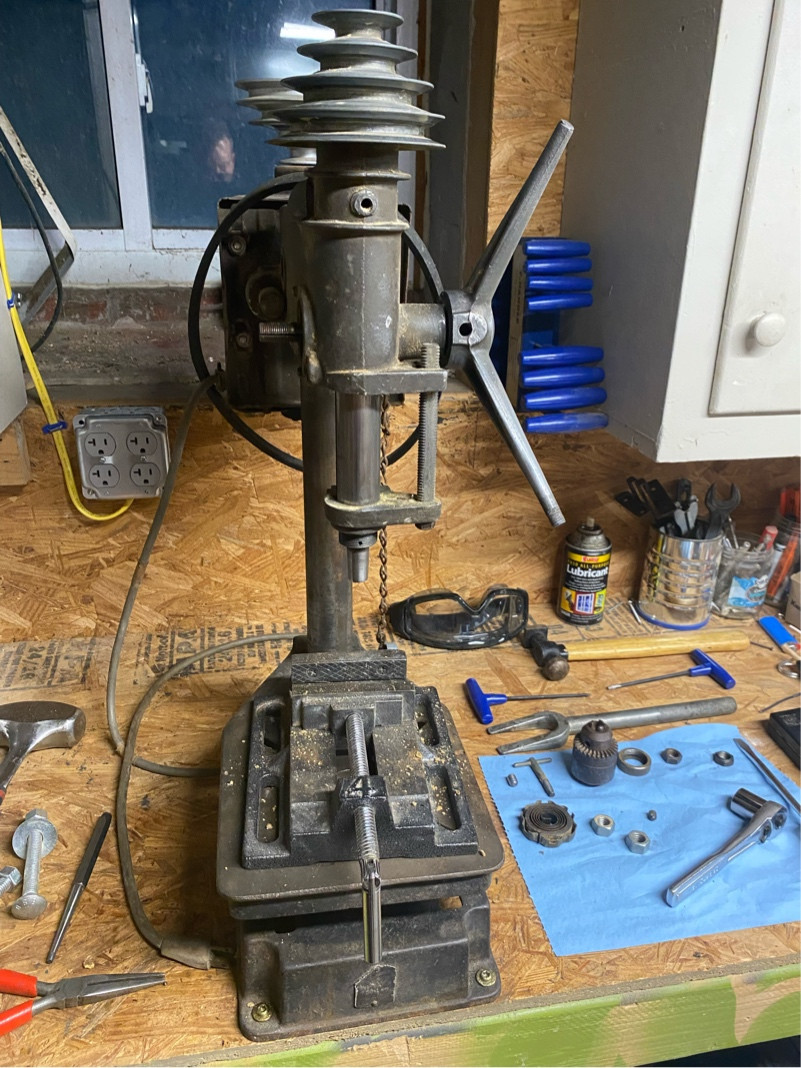 My neighbor gave me an old drill press. He said it hadn’t been used in 30 years. I wanted to try to restore it, but I’m having trouble getting it apart. From what I can see, the handle shaft gear looks to big to slide past the body. I don’t see any snap rings inside the body or on the handle. With the handle set screw out, it free-wheels on the shaft but doesn’t seem to budge with prying or trying to tap it loose. No make or model on the body. Any ideas what I’m working with?

I don't know what you're facing here, but I thought I'd provide something that might help so this Q doesn't remain unanswered (meaning it will subsequently bob back to the top over the coming months and years).

First to repeat my point from my Comment, you may not have to get this fully apart to get it up and running. IMO if there's no obvious way something comes apart, or there appears to be but it won't budge (more on this below), the best course of action initially is to see if it's possible to work around it, even though this can be awkward and slow things down.

I do know, intimately, the urge to disassemble down to all component parts :-) But it's just not necessary in every case. A good example of this is the Jacobs chuck, which few people take apart during a drill restoration to clean inside1.

But, let's look at what you're facing.

With the handle set screw out, it free-wheels on the shaft but doesn’t seem to budge with prying or trying to tap it loose.

Let's assume the handle isn't captured and can pull straight off, in which case I think the issue might be a very tight fit (a press fit) to the shaft.

Since there's so little play side to side, essentially none, prying and tapping at even the slightest angle is almost guaranteed not to work. [Anyone with an engineering background will know exactly where I'm heading here.]

I had a similar issue on a part of something once, where no amount of careful prying or knocking from the back, working carefully around the circumference, would shift it even a little bit forward; I tried repeatedly over a couple/several days and got nowhere. I was confident it must come straight off its spindle but couldn't figure out a way to accomplish this so went searching online and found the solution — a crude version of a bearing puller2. And lo and behold, because the pulling force was directly in line with the axis as I started to turn the central bolt the thing moved instantly3.

There are some commercial bearing pullers that look like they'd work for this — two-jaw, with a long reach — perhaps a buddy who is into cars might have one you could borrow so you don't have to buy one just for this. But if you had to you could fashion something quick and dirty from wood and some cheap bits of hardware that would work similarly and might get the job done.

1 Although the methodology is obscure it's not especially difficult. For anyone who does want to go that far the process is well described online

3 Cue big grin and feeling of accomplishment, but tempered almost immediately with the thought that if the fit was this tight I might not be able to get it back on again......

Not the answer you're looking for? Browse other questions tagged power-tools tool-maintenance restoration tool-repair drill or ask your own question.

19
How should I store the batteries of my cordless drill?
6
Restore old embossed saw handle?
11
How do I choose a drill press?
13
How to restore old files?
6
How to remove the upper wheel of a bandsaw?
1
Where can I find a replacement chuck for a drill press?
5
How can a bit brace handle be replaced?
6
What is the purpose of the side handle on a hand ("eggbeater") drill?
3
Drill press, chuck falls down. How do I repair?
1
How is a straight arbor retained and engaged on a drill press?