I'm looking for the type of saw that will most easily, reliably and precisely cut a piece of wood lengthwise without the need for a lot of preparation or cleverness. I also want it to be a reasonable thing to own (in terms of price and space) for someone who isn't (yet) especially dedicated to woodworking and isn't extremely wealthy or poor. In other words, I don't mind spending a couple of hundred bucks on something that I probably won't use very often but when I do use it, the job will be a lot easier. I do mind spending a couple of thousand bucks on such a thing.

I'm not really a woodworker at all. It's interesting to me so perhaps one day I will pursue it when I have more spare time. However, I do do a lot of DIY projects for fun and as needed. Pretty much every single time that I've needed to cut some wood, I've had to do a lengthwise cut (I think it's called ripping but not 100% sure). While my circular saw can do a decent job on width-wise cuts (cross-cuts, I believe), when it comes to length-wise, it always comes out poorly and setting it up is difficult.

Now, I've seen videos where people build all kinds of jigs and clamp things down in clever ways. That's all really cool but most of the time when I'm doing a project, I'm just not going to be that clever and/or I'm not going to have the spare wood lying around. I just want the wood cut to the right size so I can focus on other things.

So, for example, I want something where I can easily split a 2x4 in half lengthwise.

What kind of saw should I be looking for?

In terms of quality, table saw would give you the best results in terms of cleanliness of cut, accuracy and repeatability. It comes with a few caveats. I'll touch on circular, jig, and bandsaws as well.

Quality of the tool is obviously important. I don't have a fancy cabinet saw, nor even so-called contractor saw, but I'm fortunate enough to use my father's serious DIY saw (BT3100-series system, interesting modular beast with loyal following that was sold in early 2000s by Ryobi, then couple years as Craftsman) that was in $400-500 range new. It has decent fence that latches both front and back (important feature), and maintains repeatable square (although I check it every time before important finish cuts) without deflection. It has relatively wide capacity, allowing to work with large chunks of sheet goods, and above average built-in detachable crosscut sled (nothing like, say, precision Incra or Kreg, but much better than throwaway mitre gauges).

One can achieve decent results with DIY/jobsite saw, but one needs to be mindful of capacities and aforementioned features to choose a tool that allows you to do adequate work without fighting it too much. I would skip entry-level (sub-$150 new) saws, but good deals can be had in that range used.

Space, as mentioned in the comments, is an important consideration, but jobsite saws often come in compact form-factors that can be stowed away (or incorporated into the workbench that also increases their outfeed and wide capacities), or with folding (sometimes also rolling) stands.

Last, but not least, there are safety considerations, both by themselves, and how they relate to quality and ease of use. Ripping long boards without help and/or adequate infeed/outfeed support is tricky. Blade guards are important, but I've worked with saws where blade guards would interfere with taller material, or, say, where when you do need to take a blade guard off (e.g., dado cut), it's inseparable from a riving knife, so you lose two safety features at once. I often work with open blade, but that requires experience, and extra care: good infeed/outfeed support, no clutter around the saw to eliminate tripping hazards, push sticks/blocks, not placing hands or body over, or in front of the blade etc. Healthy amount of respect.

Whilst it wouldn't be my first choice (as a matter of fact, I've never had to make fine rip cuts with these), it's possible with some preparation. Circular saw is hands down a must-have power saw for a DIY beginner (jigsaw can do in a pinch as well, but I wouldn't recommend it due to the fact that it's easier for the blade to deflect and wander), and second power tool after a drill, especially, where cost and space are prime concerns.

Whilst there may be better suited tools for particular tasks, fine work can be done with half-decent circular saw. There are entire fine furniture projects done only with a circular saw just to make a point. As an example of precision of a circular saw with a Kreg track, here are the parts for one of my projects, which were replicated with a flush trim router bit, but the initial part was cut with a handheld saw, and it was about the only way to do it, save for the CNC: 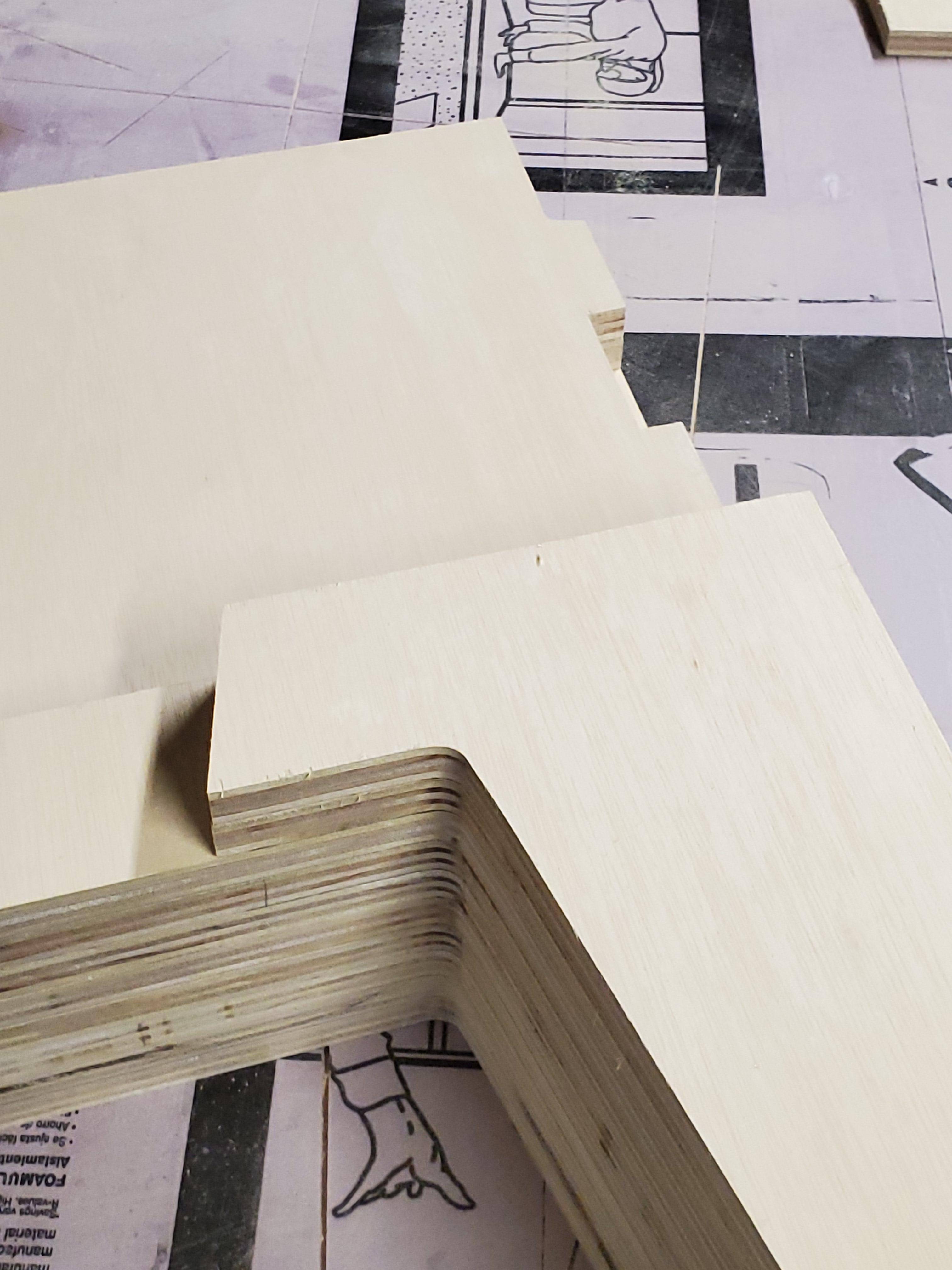 To rip a board with a circular saw with a degree of accuracy you'd need to fully support the work piece, elevate and support the shoe of the saw in line with, or above and parallel the surface of the board, and use a track. In a pinch, you can throw several 2-by boards next to one another on saw horses to provide support for the shoe, but finding straight boards like that is notoriously difficult.

Ideally, I'd place the board on a piece of hard foam insulation (I use it as a sacrificial backing for sheet goods), elevate the saw using another board or stacking sheet goods, and then use a long piece of plywood or MDF with a factory edge (absent of factory straight edge, or a track, such as those from Bora or Kreg) clamped down, as a guide for the saw.

My experience with these is limited (I've only started using one couple of months ago), but it can be done. Problem with a bandsaws is that decent ones with large enough power and capacity are harder to come by and aren't cheap (although, with luck and patience deals can be had: because of seller's poor communication, I've missed out on 1980s 14" bandsaw requiring minimal tune up for $80 this spring). They're heavy (even my bench top 10" Rikon is beefy), take up space, it's harder to organize infeed/outfeed, and the rip cuts are relatively rough.

On the plus side, they're probably one of the safer saws. Because the blade moves downward only, there's no kick back, and you can let go of the work piece whilst the blade spins without the former moving.

Not the answer you're looking for? Browse other questions tagged rip-cut or ask your own question.

44
What is the difference between a rip-cut and a cross-cut?
6
How can I cut a partial groove in the center of a piece of wood without going through the ends?
0
Wide or narrow side between blade and fence in rip cut on table saw