I'm building a coffee table with legs that are sub-assembled with a miter joint. See photo. The plans call for a Domino or dowels in addition to a spline [edit: key, see link below] for added strength.

I don't own a Festool Domino joiner and I'm struggling to plan out a way to accurately drill for dowels into the miters. My question is whether the miter joints will be strong enough with just glue plus the key glued in? I acknowledge that I could also do pocket holes on the underneath, and they would be hidden well, but if they aren't necessary then I'd like to avoid.

The picture shows in red where the key would go. The Domino/dowels are supposed to go at the bottom of the miter joint.

Author's Edit: I've added a complete picture of the table for additional context. You should now be able to see how the leg in question supports the table. 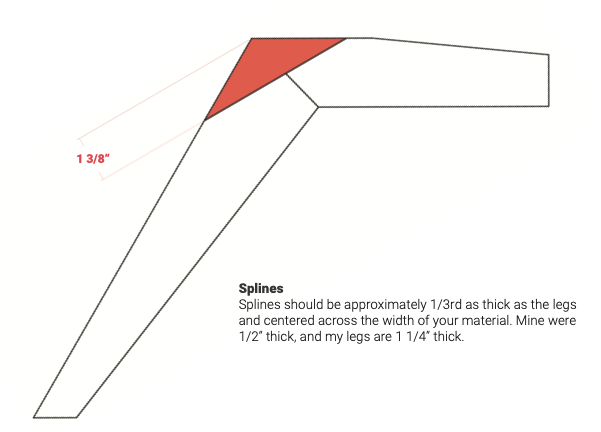 The plans call for a domino or dowel, plus a spline for added strength.

Just so you know, this is probably overkill.

Many such legs are reinforced by just one means, not two, and the tables survive use just fine. However, you can by all means reinforce in two (or more!) ways because you trust the plan and want to go with it exactly as written, or simply for peace of mind because you like to over-engineer any critical joint, just in case; nothing wrong with this.

Re. how the plan is written, be aware that the writer has fallen into the modern trap of sloppy terminology — what are marked in red are keys, not splines1.

Also regarding the author's specific implementation of keys here, two thinner ones would add more strength than a single fatter key.

I'm struggling to plan out a way to accurately drill dowels into the miters.

Oh this is easy. If you drill the holes separately it's really just a matter of:

OR, one of my favourite solutions when it comes to dowel reinforcements, just drill the holes after assembly, i.e. using through dowels. Once a mitre is assembled it's a snap to drill right through the joint to sufficient depth that the dowels seat deeply into the second piece of wood; in this case drill down from the top so you get decent penetration into the legs. Incidentally, the exact angle of the dowels isn't critical, and, each one doesn't have to be consistent with its neighbour.

I don't own a Festool domino joiner

Seriously though, dowel joinery has been shown in multiple tests to be just as strong or stronger, is nearly as fast to do (close enough as makes no odds in some cases), it doesn't require a specialist mono-tasking tool which let's face it, is not cheap (understatement) and doesn't then tie you to a fastener that is also, ahem, not cheap (magically makes beech cost more than ebony!) and is more difficult to source in difficult circumstances2.

On the other hand dowels can more easily be bought from a range of sources and if needed, or preferred, shop-made. Now you can of course make your own floating tenons — that's what a Domino is, a specialist kind of floating tenon — but by comparison dowels are much, much faster to make3 and allow you to use various offcuts and scraps that are smaller so a better frugal option4. Also worth bearing in mind that now that we have easy access to epoxies dowels don't even need to be wood. Comparatively, dowel joinery is full of win.

1 I don't know why but people seem to have trouble keeping track of which is which. But I think it's fairly easy to remember that keys always cross the joint, while splines run along the joint (or splines line up with the joint if you want a mnemonic).

2 Normally this point is a little forced TBH — one usual example being, what if you run out in the middle of a weekend? — but not in recent times when sources of supply have dwindled or dried up entirely and deliveries have been slow (to the point of farce in some cases) or even non-existent.....

3 Using a shop-made dowel plate..... or if money is super tight, just a washer.

4 Can even be quickly, and safely, made from firewood if necessary! [By splitting off chunks and riving them down to approximate cross section in stages, which also ensures the dowels have super-straight grain so are as strong as poss. This process doesn't require a froe, a hatchet or axe, or even a chisel, I've done it by batoning with a stout kitchen knife more than once.]

My main concern with your sketch of the leg is that the key is at the outside corner of the leg segment intersection. The weight on the table will want to cause the two pieces of the leg to splay out increasing the angle between them. The lower inside corner of the leg segments will want to pull away. The "key" (ahem, tribute to Graphus) is located at the top, outside corner and does not extend all the way along the joint to the bottom, inside corner. The key is located at the point in the joint where it is needed least. Since you are including a spline (oops!), I would extend it all the way along the length of the joint. With such glued joint there is no need for dowels. The keyway can be easily cut on both leg segments on a table saw with a proper jig to secure the piece for its saw run.

Not the answer you're looking for? Browse other questions tagged joinery strength dowel miter-joint or ask your own question.

12
Strong joints to use when making custom frames

6
Should I use one large spline or multiple smaller ones for a miter joint?
11
Are spline joints inherently stronger than a standard butt miter joint?
12
Quick corner joints in practice
2
Does the waterfall side of my table design have a strong joint?
4
Dining table with multiple miter cuts
1
What knock down hardware can I use on this platform bed frame?
13
How to join at an angle?
6
What strong options are there to join these pieces?
0
How can I replicate this joint?
1
Doweled miter joint vs doweled butt joint