How do you orient the grain in a tool handle that takes shocks?

Following on from the comments in this question how does one orient the grain when making a tool handle that takes shocks?

These images show a piece of pinyon pine that I used to make a hammer handle. First time I've done this. Feel free to be brutally honest about the mistakes I made otherwise I won't learn.

This question is specifically asking how I should have oriented the grain from this piece of wood to create a stronger hammer handle. 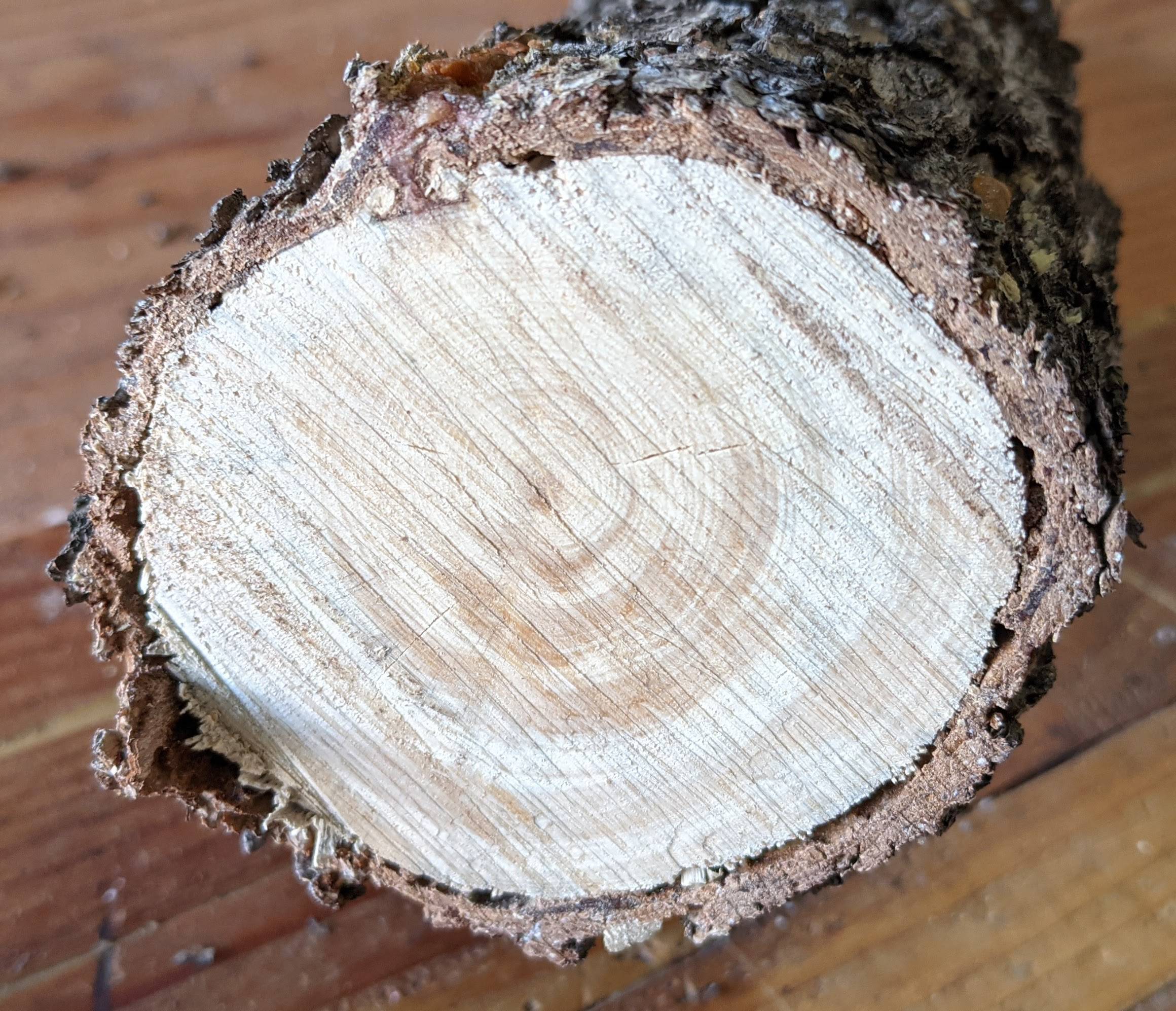 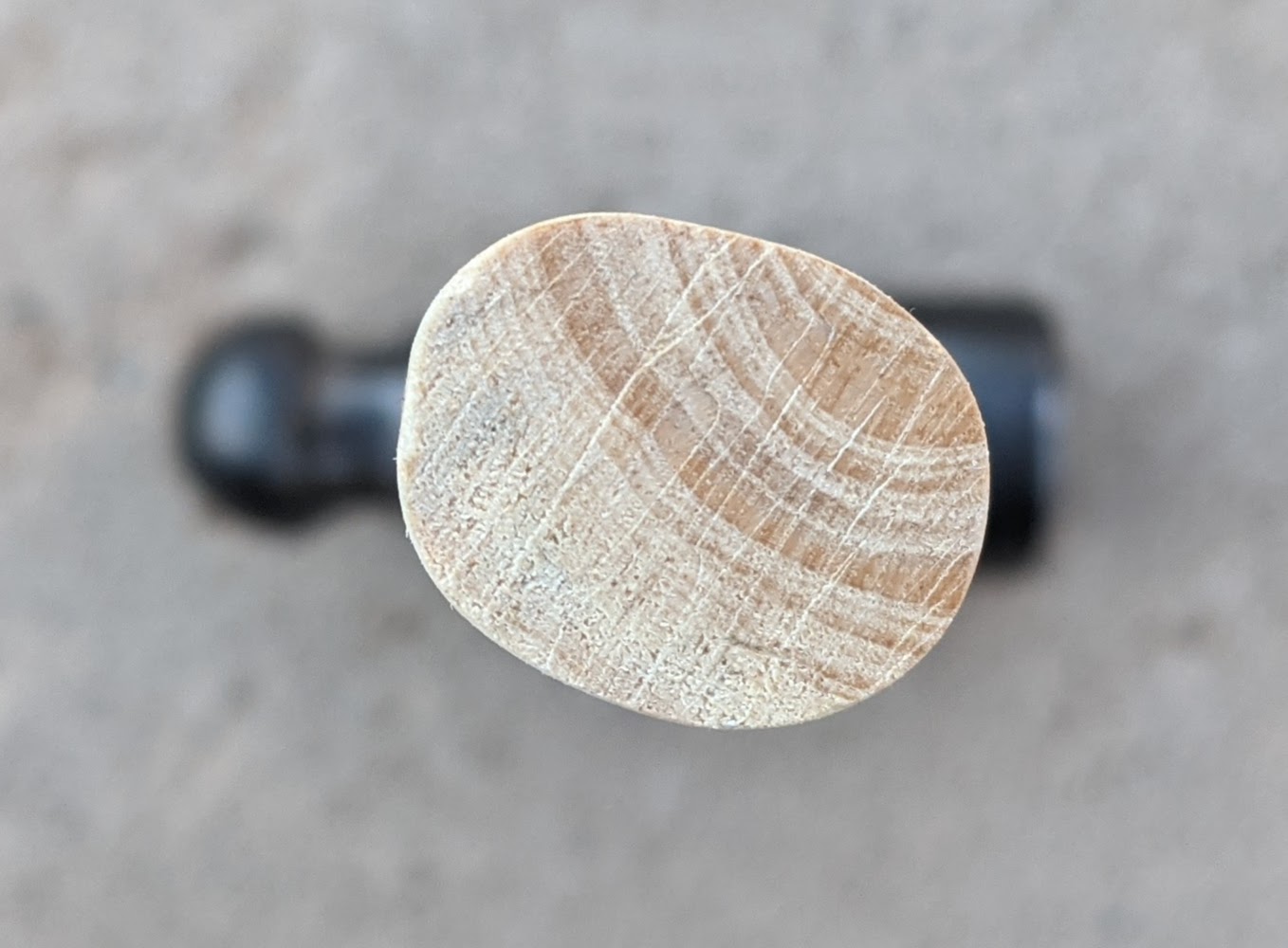 This question is specifically asking how I should have oriented the grain from this piece of wood to create a stronger hammer handle.

The closing of my Answer to this old question, What are some suitable woods to use for tool handles? covers this, and previously some other important points.

In short, experience has shown that grain should run front to back in a hammer eye (ditto hatchets, axes etc.).

How you can see this most easily when viewing a tool or loose handle is when laid flat you should be looking at 'cathedral' grain facing straight up (i.e. you shouldn't be seeing tightly packed straight grain, that should ideally face directly front and back).

These images show a piece of pinyon pine that I used to make a hammer handle. First time I've done this. Feel free to be brutally honest about the mistakes I made otherwise I won't learn.

The grain orientation is not the best but by no means the worst either.... I've seen much worse on commercial handles, more on that in my closing!

You used only a portion of the piece, cutting out the heart which is generally a good thing (unless you can arrange to 'box' it, so that it runs centrally through the entire handle, which is sometimes done on tool handles).

A straighter piece would have been better, unless you wanted to incorporate the natural curvature into the handle, in which case this would have been perfect. And one without knots or any areas of swirling grain is generally recommended.

Now about the wood type, it's not necessarily bad news. Repeating the point from the above link, forget the species, what's this piece like? Pinyon pine, as a slow-growing variety is certainly far more likely to have better handle properties1 than your average piece of unguessable 'pine' 2x construction wood from the big-box store with grain lines about a yard wide.

TL;DR diatribe on commercial handles
Whatever you do, don't get guidance from commercial tool handles! Commercial handles, both those already fitted and replacement handles — even some sold to be upgrades to factory-fitted handles — are simply a terrible guideline to how to best orient the grain for hammers, but more importantly axes, mauls and sledges because there is zero consistency, including handle to handle from the same maker! They're churning them out from rough blanks without regard to colour, grain orientation or anything else, and it can result in some truly godawful handles that are doomed to failure.

This is obviously in modern handles, however, and this will surprise some people, vintage tools and spare handles are guilty of the same thing. Although the frequency of better or ideal grain orientation may have been higher in the past (possibly better and better the older you go) many observers have independently noted the same thing: that vintage and antique tools can still have textbook bad grain orientation, and sometimes bad grain runout. Occasionally both, which is the cardinal sin of wooden handles. Where you can often see this most pointedly is on old hammers and axes where there's just a handle stub remaining, or where the only wood left is stuck in the eye. Nine times out of ten it's because of one or both problems.

By comparison, producers of commercial major-league baseball bats can be far more conscientious about doing this the right way2. In this image of a selection of bats note that the logo is invariably placed on the side of the 'cathedrals':

1 The narrower the grain the better since this decreases the amount of pale earlywood, which is meh, and increases the proportion of the darker latewood which is more akin to hardwood, improving toughness (more likely to hold up to the rigours of use) and adding weight (gives better balance).

2 See this previous Answer for a little more on grain orientation in bats.

Not the answer you're looking for? Browse other questions tagged end-grain or ask your own question.

16
What are some suitable woods to use for tool handles?
5
Where should the trademark be placed on a baseball bat?
0
Retain smell of wood on a tool and also protect it?

26
How can I prepare the end grain for stain, so that its final appearance matches the rest of the wood?
12
What are the advantages of end-grain cutting boards?
27
How can I join two boards at the ends?
19
How do you plane end grain?
13
What are the different grain directions, and how do they affect joint strength?
3
How to de-emphasize grain in red oak shelves
1
Pores on the face of an end grain chopping board