Why do 2 screws on wooden fence cladding not cause wood movement problems?

Wooden fence cladding is common here, they're the fences between neighbors that use horizontal wooden cladding attached to a fence post.

Douglas fir is a popular choice, which can expand a lot during rainy days.

The recommendation is always to leave some horizontal spacing between the individual boards to allow for wood movement.

But another recommendation is always to use 2 screws on either side of the board (so 4 screws per board) when attaching it to the fence posts to prevent the board from cupping and warping.

Why don't these two screws cause issues? Why doesn't the wood split and fly off the fence posts when it expands? It seems completely restricted by the screws, and is constantly under changing moisture conditions outside. Is it because individual wood fibers don't run all the way through the wood and leaving space between boards is enough?

Can anyone help me answer why on the one hand you need to leave space between each board to allow for wood movement, and on the other you are screwing it down with 2 screws on each site, seemingly preventing wood movement. Thanks.

After looking through several books regarding building codes, using fasteners in this way does cause issues with many species of wood. To avoid this, oversized pilot holes should be used so the wood can move to minimize tension on the screws. Countersinks should be avoided and wide flat screw heads should be used instead.

What I don't understand is why this system of using fasteners on cladding and decks is so popular when it doesn't allow for wood movement and many building codes advise against it. 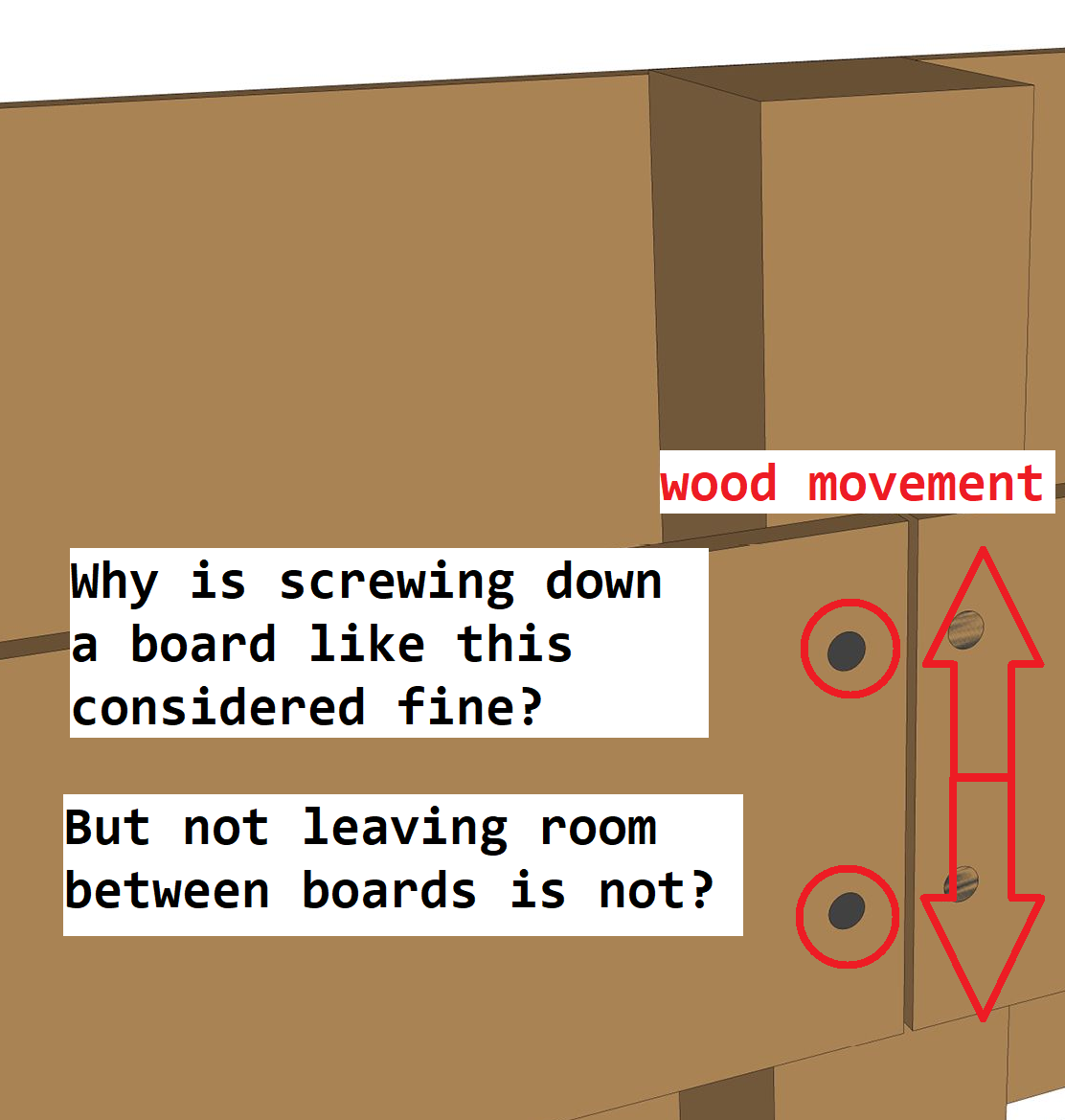 Expansion and contraction of wood is proportional to the width of the wood, so if a 6 inch wide board expands by 0.1 inches when it gets wet, then a 12 inch wide board will expand by 0.2 inches if everything else is the same.

There is some movement between the screws as you've seen, and using oversize holes and flat screw heads allows that movement to occur without damaging the wood. But even without those techniques, the amount of movement is fairly small because the distance between the screws is only a few inches. If the screws are 4 inches apart, then using the example above, the expansion between the screws is just over 1/16 inch. The wood doesn't "split and fly off the fence", but instead the wood pushes back and forth against the screws countless times over the years, causing the holes to get a little larger, and the screws to loosen a bit.

The situation is different if the boards are installed without gaps. As each board expands it tries to push the adjacent board away. But the adjacent board is also expanding, so it tries to push the next board even further. Overall, it will be more like a single wide board. So if the fence is 72 inches tall, the total expansion would be 1.2 inches. This is too much movement to accommodate, and will result in cracking or screws pulling out of the wood.

6
How to fix a wooden floor
3
Shelves inside cupboard, how to attach to legs?
0
Will a 4x4 be suitable?
2
pocket hole joint Vs. cam lock joint - What's sturdier?
1
Expansion of wood countertop with built in bookshelves resting on it
0
Does wood truly not have any movement to speak of longitudinally?